Encyclopedia
The Tornado is an two person multihull class recognised as an International Class by the International Sailing Federation. It was used for the Olympic Catamaran discpline for over 30 years.

The boat was designed in 1967 by Rodney March of Brightlingsea
Brightlingsea
Brightlingsea is a coastal town in the Tendring district of Essex, England, located between Colchester and Clacton-on-Sea, situated at the mouth of the River Colne, on Brightlingsea Creek. It has an estimated population of 8500....
, England, with help from Terry Pierce, and Reg White, specifically for the purpose of becoming the Olympic catamaran. At the IYRU Olympic Catamaran Trials, it easily defeated the other challengers.

To increase its performance even further, the Tornado was modified in 2000, with a new sail-plan
Sail-plan
A sail-plan is a set of drawings, usually prepared by a naval architect. It shows the various combinations of sail proposed for a sailing ship.The combinations shown in a sail-plan almost always include three configurations:...
which included a Spinnaker
Spinnaker
A spinnaker is a special type of sail that is designed specifically for sailing off the wind from a reaching course to a downwind, i.e. with the wind 90°–180° off the bow. The spinnaker fills with wind and balloons out in front of the boat when it is deployed, called flying. It is constructed of...
and Spinnaker boom, as well as an increased sail area of the existing sails. An additional trapeze
Trapeze (sailing)
In sailing, the trapeze refers to a wire that comes from a point high on the mast, usually where the shrouds are fixed, to a hook on the crew member's harness at approximately waist level...
was also added, and the jib was made self tacking. 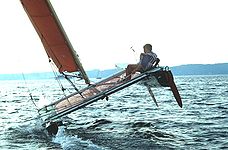 The Tornado typically flies one of its two hulls; the crew balancing the boat with their own weight and by controlling the sails. With only one hull in the water, drag is significantly reduced. The Tornado also features an adjustable, rotating mast, which not only greatly improves the aerodynamics of the crucial leading edge of the sail, but also allows improved control over mast bend and thus mainsail flatness. For the high speeds and apparent wind
Apparent wind
Apparent wind is the wind experienced by a moving object.-Definition of apparent wind:The Apparent wind is the wind experienced by an observer in motion and is the relative velocity of the wind in relation to the observer....
directions seen by this high speed vessel, a flat sail profile is often required.

The Tornado is still among the fastest 2-person catamarans, with an ISAF Small Catamaran Handicap Rating System rating of 0.934, and some have characterized the Tornado class as "the Formula One
Formula One
Formula One, also known as Formula 1 or F1 and referred to officially as the FIA Formula One World Championship, is the highest class of single seater auto racing sanctioned by the Fédération Internationale de l'Automobile . The "formula" designation in the name refers to a set of rules with which...
of sailing".

The Tornado was used as the as equipment for the multihull discipline in the Olympic Games
Olympic Games
The Olympic Games is a major international event featuring summer and winter sports, in which thousands of athletes participate in a variety of competitions. The Olympic Games have come to be regarded as the world’s foremost sports competition where more than 200 nations participate...
from 1976 through 2008, when multihulls were deselected. Please see the individual years for results Olympic Sailing Regatta
Sailing at the Summer Olympics
Sailing has been one of the Olympic sports since the Games of the I Olympiad, held in Athens, Greece, in 1896. Despite being scheduled in the first Olympic program, the races were canceled due to severe weather conditions...