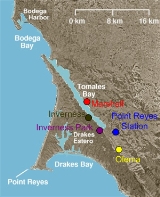 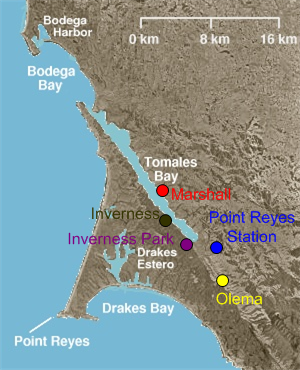 Tomales Bay is a long narrow inlet of the Pacific Ocean
Pacific Ocean
The Pacific Ocean is the largest of the Earth's oceanic divisions. It extends from the Arctic in the north to the Southern Ocean in the south, bounded by Asia and Australia in the west, and the Americas in the east.At 165.2 million square kilometres in area, this largest division of the World...
in Marin County
Marin County, California
Marin County is a county located in the North San Francisco Bay Area of the U.S. state of California, across the Golden Gate Bridge from San Francisco. As of 2010, the population was 252,409. The county seat is San Rafael and the largest employer is the county government. Marin County is well...
in northern California
California
California is a state located on the West Coast of the United States. It is by far the most populous U.S. state, and the third-largest by land area...
in the United States
United States
The United States of America is a federal constitutional republic comprising fifty states and a federal district...
. It is approximately 15 miles (25 km) long and averages nearly 1.0 miles (1.6 km) wide, effectively separating the Point Reyes Peninsula from the mainland of Marin County. It is located approximately 30 miles (48 km) northwest of San Francisco. The bay forms the eastern boundary of Point Reyes National Seashore
Point Reyes National Seashore
Point Reyes National Seashore is a park preserve located on the Point Reyes Peninsula in Marin County, California, USA. As a national seashore, it is maintained by the US National Park Service as a nationally important nature preserve within which existing agricultural uses are allowed to continue...
. Tomales Bay is recognized for protection by the California Bays and Estuaries Policy
California Bays and Estuaries Policy
The Water Quality Control Policy for the Enclosed Bays and Estuaries of California is published by the California State Water Resources Control Board as guidelines to prevent water quality degradation. The policy is revised as needed.-Geography:...
. On its northern end it opens out onto Bodega Bay
Bodega Bay
Bodega Bay is a shallow, rocky inlet of the Pacific Ocean on the coast of northern California in the United States. It is approximately across and is located approximately northwest of San Francisco and west of Santa Rosa...
, which shelters it from the direct current of the Pacific. The bay is formed along a submerged portion of the San Andreas Fault
San Andreas Fault
The San Andreas Fault is a continental strike-slip fault that runs a length of roughly through California in the United States. The fault's motion is right-lateral strike-slip...
.

Oyster farming is a major industry on the bay. The two largest producers are Tomales Bay Oyster Co and Hog Island Oyster Co, both of which retail oysters to the public and have picnic grounds on the east shore. Hillsides east of Tomales Bay are grazed by cows belonging to local dairies. There is also grazing land west of the bay, on farms and ranches leased from Point Reyes National Seashore.

The bay sees significant amounts of water sports including sailing, kayaking, and motorboating. Watercraft may be launched on Tomales Bay from the public boat ramp at Nick's Cove, north of Marshall. There is a $5 fee. The sand bar at the mouth of Tomales Bay is notoriously dangerous, with a long history of small boat accidents.

The area was once Coast Miwok
Coast Miwok
The Coast Miwok were the second largest group of Miwok Native American people. The Coast Miwok inhabited the general area of modern Marin County and southern Sonoma County in Northern California, from the Golden Gate north to Duncans Point and eastward to Sonoma Creek...
territory. Documented villages in the area included: Echa-kolum (south of Marshall
Marshall, California
Marshall is an unincorporated community in Marin County, California. It is located on the northeast shore of Tomales Bay south of Tomales, at an elevation of 23 feet .Marshall is located on the east shore of Tomales Bay...
), Sakloki (opposite Tomales Point), Shotommo-wi (near the mouth of the Estero de San Antonio
Estero de San Antonio
Estero de San Antonio is a stream in the northern California counties of Marin and Sonoma which empties into Bodega Bay.-Course:The Estero springs just north of the Marin-Sonoma county line and runs south along Gericke Road into Marin County...
), and Utumia (near Tomales).

Francis Drake
Francis Drake
Sir Francis Drake, Vice Admiral was an English sea captain, privateer, navigator, slaver, and politician of the Elizabethan era. Elizabeth I of England awarded Drake a knighthood in 1581. He was second-in-command of the English fleet against the Spanish Armada in 1588. He also carried out the...
is thought to have landed in nearby Drakes Estero in 1579.

The narrow gauge North Pacific Coast Railroad
North Pacific Coast Railroad
The North Pacific Coast Railroad was a common carrier narrow gauge steam railroad begun in 1874 and sold in 1902 to new owners who renamed it the North Shore Railroad and which rebuilt the southern section into a standard gauge electric railroad.The NPC operated in the northern California...
from Sausalito
Sausalito, California
Sausalito is a San Francisco Bay Area city, in Marin County, California, United States. Sausalito is south-southeast of San Rafael, at an elevation of 13 feet . The population was 7,061 as of the 2010 census. The community is situated near the northern end of the Golden Gate Bridge, and prior to...
was constructed along the east side of the bay in 1874 and extended to the Russian River
Russian River (California)
The Russian River, a southward-flowing river, drains of Sonoma and Mendocino counties in Northern California. With an annual average discharge of approximately , it is the second largest river flowing through the nine county Greater San Francisco Bay Area with a mainstem 110 miles ...
until dismantled in 1930.

The Giacomini Wetland Restoration Project, completed in 2008, returned to wetland several hundred acres at the south end of the bay that had been drained for grazing during the 1940s. 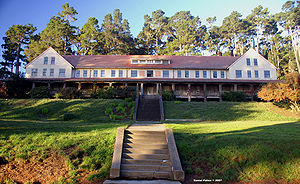 The Marconi Conference Center SHP preserves a small hotel built by Guglielmo Marconi
Guglielmo Marconi
Guglielmo Marconi was an Italian inventor, known as the father of long distance radio transmission and for his development of Marconi's law and a radio telegraph system. Marconi is often credited as the inventor of radio, and indeed he shared the 1909 Nobel Prize in Physics with Karl Ferdinand...
in 1913 to house personnel who staffed his transpacific radio
Radio
Radio is the transmission of signals through free space by modulation of electromagnetic waves with frequencies below those of visible light. Electromagnetic radiation travels by means of oscillating electromagnetic fields that pass through the air and the vacuum of space...
receiver station nearby. The hotel and the associated operations building and employee cottages were built by the J.G. White Engineering Corp under contract to Marconi. RCA
RCA
RCA Corporation, founded as the Radio Corporation of America, was an American electronics company in existence from 1919 to 1986. The RCA trademark is currently owned by the French conglomerate Technicolor SA through RCA Trademark Management S.A., a company owned by Technicolor...
purchased the station from Marconi in 1920. The station was closed in 1939, though other nearby radio stations on the Point Reyes Peninsula still operate today. Synanon
Synanon
The Synanon organization, initially a drug rehabilitation program, was founded by Charles E. "Chuck" Dederich, Sr., in 1958, in Santa Monica, California, United States...
, a drug rehabilitation cult, owned it from the early 1960s until 1980, when it was purchased by a private foundation
Foundation (charity)
A foundation is a legal categorization of nonprofit organizations that will typically either donate funds and support to other organizations, or provide the source of funding for its own charitable purposes....
and given to the state in 1984 to operate as a conference center.