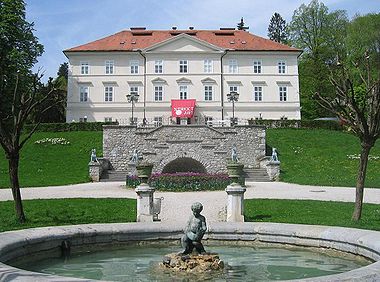 Tivoli Castle is a mansion
Mansion
A mansion is a very large dwelling house. U.S. real estate brokers define a mansion as a dwelling of over . A traditional European mansion was defined as a house which contained a ballroom and tens of bedrooms...
in Ljubljana
Ljubljana
Ljubljana is the capital of Slovenia and its largest city. It is the centre of the City Municipality of Ljubljana. It is located in the centre of the country in the Ljubljana Basin, and is a mid-sized city of some 270,000 inhabitants...
, the capital of Slovenia
Slovenia
Slovenia , officially the Republic of Slovenia , is a country in Central and Southeastern Europe touching the Alps and bordering the Mediterranean. Slovenia borders Italy to the west, Croatia to the south and east, Hungary to the northeast, and Austria to the north, and also has a small portion of...
.

In the mid-19th century, it was bought by the Austrian emperor
Austrian Empire
The Austrian Empire was a modern era successor empire, which was centered on what is today's Austria and which officially lasted from 1804 to 1867. It was followed by the Empire of Austria-Hungary, whose proclamation was a diplomatic move that elevated Hungary's status within the Austrian Empire...
Francis Joseph I, who in 1852 presented it as a gift to the veteran Habsburg marshal
Marshal
Marshal , is a word used in several official titles of various branches of society. The word is an ancient loan word from Old French, cf...
Joseph Radetzky. Radetzky renovated the mansion in the Neoclassical style, giving it its present appearance, and spent much of his retirement in it with his wife Francisca von Strassoldo Grafenberg, a local Carniola
Carniola
Carniola was a historical region that comprised parts of what is now Slovenia. As part of Austria-Hungary, the region was a crown land officially known as the Duchy of Carniola until 1918. In 1849, the region was subdivided into Upper Carniola, Lower Carniola, and Inner Carniola...
n noblewoman.

Twelve years after Radetzky's death in 1858, a statue of the famous general was erected on the plaze at the top of the stairs leading to the castle, guarded by four cast-iron dogs made by the sculptor Anton Fernkorn. The monument was removed after the dissolution of Austria-Hungary
Austria-Hungary
Austria-Hungary , more formally known as the Kingdoms and Lands Represented in the Imperial Council and the Lands of the Holy Hungarian Crown of Saint Stephen, was a constitutional monarchic union between the crowns of the Austrian Empire and the Kingdom of Hungary in...
in 1918, and placed in the National Museum of Slovenia
National Museum of Slovenia
The National Museum of Slovenia is located in Ljubljana, the capital of Slovenia. It is situated in the Center district of the city near the Tivoli Park....
, but the dogs have remained in their original places.

In 1863, the mansion was bought by the Municipality of Ljubljana, who used it as (among other things) a poorhouse, later subdividing ot into condominiums. In 1967, it was again renovated and became the venue for the International Graphic Arts Centre .

An alpine-style building called the Švicarija ("Swissery", formerly the Hotel Tivoli) stands behind the mansion. The Jesenkova educational footpath behins alongside it.
The source of this article is wikipedia, the free encyclopedia.  The text of this article is licensed under the GFDL.