Encyclopedia
Tingloy is a fifth-class municipality in the province of Batangas, Philippines
Philippines
The Philippines , officially known as the Republic of the Philippines , is a country in Southeast Asia in the western Pacific Ocean. To its north across the Luzon Strait lies Taiwan. West across the South China Sea sits Vietnam...
. According to the 2007 NSO census, it has a population of 18,548 people in 3,269 households

The town wholly comprises Maricaban Island, just south of the Calumpang Peninsula in town of Mabini, Batangas
Mabini, Batangas
Mabini is a 1st class municipality in the Province of Batangas, Philippines. It is located on the Calumpang Peninisula between Batangas Bay to the east and Balayan Bay to the west. According to the latest census, Mabini has a population of 40,629 people in 7,025 households...
. Tingloy is a small island beaches and over 30 dive points become popular to tourist and livelihood of the residents.

Tingloy is politically subdivided into 15 barangay
Barangay
A barangay is the smallest administrative division in the Philippines and is the native Filipino term for a village, district or ward...
s.

Just off the southwest coast of the Batangas mainland, about two nautical miles away, lies the radish-shaped Island of Maricaban. People by no less than 13,000 inhabitants, the Maricaban Island has a territorial expansion of about 14 square miles (36.3 km²) of rugged hills and sloping mountains with the occasional splatterings of lowland plains and a liberal springklings of valleys. The coastal perimeter of the Island with green trees and clinging vines and sudden drops of stony mountains slopes is a real treat to the eyes. Spread all over the Island are barrios of Sto. Tomas, Talahib, San Pedro, Gamao, Pisa, Corona, San Isidro, Papaya, San Juan, Macawayan, Maricaban, San Jose and Tingloy, the latest to become later the seat of government of the Municipality of Tingloy.

The name "Tingloy" was according to legend, derived from a plant of almost the same name. Nowhere in the whole Island could one find now in abundance the plant called "tinghoy".

The first people to inhabit the Island almost a century age today came from Taal and Bauan presumably to escape the brutalities perpetrated by the Spanish "conquistadores". They came in family groups and finding the place a real haven, settled down in definite areas later to prove themselves to be the nuclei of the various barrios now comprising the created political subdivision. It is said that the former barrio of Tingloy was founded by Jose Martinez, a Taaleño.

At several times the island underwent a series of political alliance. At first it was a part of the Municipality of San Luis. Later on in 1917, it was placed under the administration of Bauan only to be severed therefrom and cradled by the then newly created municipality of Mabini in 1918. This last mentioned alliance was effected due, perhaps, to geographical position. This arrangement, however, did not last long, for not long afterward - in 1921 - it swayed back to Bauan until the birth of its municipal independence.
During the Spanish regime people were educated at home learning to read the "Cartillas" and the "Caton" "Christiana". During American occupation schools were established. Mr. Ireneo Martinez together with Mr. Flaviano Gamben, initiated a movement for a model schoolhouse for the former barrio of Tingloy. This movement was crowned with the success when a model schoolhouse was constructed in the present poblacion of the Municipality of Tingloy sometime in 1921.

During the second Regular Session of the third Congress of the Republic of the Philippines, Republic Act No. 1344 (House Bill No. 11), creating the Municipality of Tingloy was, approved. House Bill No. 11 was authored by the Hon. Numeriano U. Babao, Congressman for the Second District of Batangas. His Excellency President Ramon Magsaysay
Ramon Magsaysay
Ramón del Fierro Magsaysay was the third President of the Republic of the Philippines from December 30, 1953 until his death in a plane crash in 1957. He was elected President under the banner of the Nacionalista Party.-Early life:Ramon F...
, on June 17, 1955, appointed the first municipal Officials headed by Atty. Ramon De Claro as Mayor. 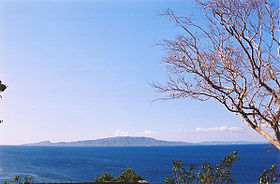