Encyclopedia
The Tinfoil Barb is a tropical Southeast Asia
Southeast Asia
Southeast Asia, South-East Asia, South East Asia or Southeastern Asia is a subregion of Asia, consisting of the countries that are geographically south of China, east of India, west of New Guinea and north of Australia. The region lies on the intersection of geological plates, with heavy seismic...
n freshwater
Freshwater
Fresh water is naturally occurring water on the Earth's surface in ice sheets, ice caps, glaciers, bogs, ponds, lakes, rivers and streams, and underground as groundwater in aquifers and underground streams. Fresh water is generally characterized by having low concentrations of dissolved salts and...
fish
Fish
Fish are a paraphyletic group of organisms that consist of all gill-bearing aquatic vertebrate animals that lack limbs with digits. Included in this definition are the living hagfish, lampreys, and cartilaginous and bony fish, as well as various extinct related groups...
of the family
Family (biology)
In biological classification, family is* a taxonomic rank. Other well-known ranks are life, domain, kingdom, phylum, class, order, genus, and species, with family fitting between order and genus. As for the other well-known ranks, there is the option of an immediately lower rank, indicated by the...
Cyprinidae. This species was originally described as Barbus schwanenfeldii by Pieter Bleeker
Pieter Bleeker
Pieter Bleeker was a Dutch medical doctor and ichthyologist, famous for his work on the fishes of East Asia – Atlas Ichthyologique des Orientales Neerlandaises – which was published 1862–1877....
in 1853, and has also been placed in the genera
Genera
Genera is a commercial operating system and development environment for Lisp machines developed by Symbolics. It is essentially a fork of an earlier operating system originating on the MIT AI Lab's Lisp machines which Symbolics had used in common with LMI and Texas Instruments...
Barbodes
Barbodes
Barbodes is a genus of cyprinid fish, consisting of 11 species. The name is derived from the Latin word barbus, meaning "barbel", and the Greek word oides, meaning "similar to".- Species :* Barbodes belinka...
and Puntius
Puntius
Puntius is a genus of ray-finned fishes in the family Cyprinidae of the order Cypriniformes. Fishes of this genus are known as the spotted barbs for the predominant pattern, though many have vertical black bands instead. Also, the Spotted Barb proper is one particular species, Puntius binotatus....
. The specific epithet is frequently mis-spelled schwanefeldii.

Nowadays it is usually placed in the genus Barbonymus
Barbonymus
Barbonymus is a ray-finned fish genus in the family Cyprinidae, containing some barb species. The genus was only established in 1999, with the Tinfoil Barb as type species; thus, these fish are sometimes collectively called tinfoils...
, which was only established in 1999. It is the genus' type species
Type species
In biological nomenclature, a type species is both a concept and a practical system which is used in the classification and nomenclature of animals and plants. The value of a "type species" lies in the fact that it makes clear what is meant by a particular genus name. A type species is the species...
, and indeed seems to represent a quite distinct lineage of large "barbs". It is not very similar to the barbels which are the core of the genus Barbus
Barbus
Barbus is a ray-finned fish genus in the family Cyprinidae. The type species of Barbus is the Common Barbel, first described as Cyprinus barbus and now named Barbus barbus...
, and though closer to these than to some African barbs, they seem to be closer still to the Common Carp
Common carp
The Common carp is a widespread freshwater fish of eutrophic waters in lakes and large rivers in Europe and Asia. The wild populations are considered vulnerable to extinction, but the species has also been domesticated and introduced into environments worldwide, and is often considered an invasive...
(Cyprinus carpio) and to Cyclocheilichthys
Cyclocheilichthys
Cyclocheilichthys is a genus of ray-finned fish in the family Cyprinidae.- Species :* Cyclocheilichthys apogon * Cyclocheilichthys armatus...
than to either of the aforementioned. 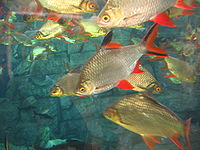 Originating in the Mekong
Mekong
The Mekong is a river that runs through China, Burma, Laos, Thailand, Cambodia and Vietnam. It is the world's 10th-longest river and the 7th-longest in Asia. Its estimated length is , and it drains an area of , discharging of water annually....
and Chao Phraya basins of Thailand
Thailand
Thailand , officially the Kingdom of Thailand , formerly known as Siam , is a country located at the centre of the Indochina peninsula and Southeast Asia. It is bordered to the north by Burma and Laos, to the east by Laos and Cambodia, to the south by the Gulf of Thailand and Malaysia, and to the...
, and Sumatra
Sumatra
Sumatra is an island in western Indonesia, westernmost of the Sunda Islands. It is the largest island entirely in Indonesia , and the sixth largest island in the world at 473,481 km2 with a population of 50,365,538...
, Borneo
Borneo
Borneo is the third largest island in the world and is located north of Java Island, Indonesia, at the geographic centre of Maritime Southeast Asia....
, and Malayan peninsula, the tinfoil barb is found in rivers, streams, canals, and ditches. It also enters flooded fields. Its natural habitat is in water with a 6.5–7.0 pH
PH
In chemistry, pH is a measure of the acidity or basicity of an aqueous solution. Pure water is said to be neutral, with a pH close to 7.0 at . Solutions with a pH less than 7 are said to be acidic and solutions with a pH greater than 7 are basic or alkaline...
, a water hardness of up to 10 dGH
DGH
Degrees of general hardness is a unit of water hardness, specifically of general hardness.General hardness is a measure of the concentration of metal divalent ions such as calcium and magnesium per volume of water...
, and a temperature range of 72–77 °F (22–25 °C). In Indonesia, a temperature range of 20.4°C to 33.7°C was recorded for this species. It is largely herbivorous, consuming aquatic macrophytes and submerged land plants, as well as filamentous algae and occasionally insects. It also feeds on small fishes, worms, and crustaceans.

The tinfoil barb is commercially important in the aquarium hobby trade, as well as commercial aquaculture, subsistence farming, and occasionally as bait. It is usually marketed fresh.

There are no obvious distinguishing characteristics used to determine the sex of the fish. They reproduce by egg scattering of several thousand eggs per spawning
Spawn (biology)
Spawn refers to the eggs and sperm released or deposited, usually into water, by aquatic animals. As a verb, spawn refers to the process of releasing the eggs and sperm, also called spawning...
. They are not often bred in captivity for the aquarium trade due to their large size.

The tinfoil barb is a schooling species that prefers to be placed with a number of its own species. It prefers living in water with strong currents similar to those found in their native streams. It is also recommended that they be kept with fish of similar size or larger. Many unwary buy young specimens and find out too late how large the tinfoil barb can grow. The tinfoil barb is often seen in large aquaria as companions to large cichlids e.g. the oscar cichlid, Astronotus ocellatus
Astronotus ocellatus
Astronotus ocellatus is a species of fish from the cichlid family known under a variety of common names, including oscar, tiger oscar, velvet cichlid, or marble cichlid. In South America, where the species naturally resides, A. ocellatus specimens are often found for sale as a food fish in the...
.
The tinfoil barb is an active, peaceful species that spends most of its time in the mid-level and bottom of the water. A greedy eater, it will attempt to fill its mouth with as much food as possible during feedings. In captivity, it will eat almost anything provided to it.
The source of this article is wikipedia, the free encyclopedia.  The text of this article is licensed under the GFDL.