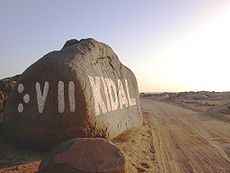 Tifinagh is a series of abjad
Abjad
An abjad is a type of writing system in which each symbol always or usually stands for a consonant; the reader must supply the appropriate vowel....
and alphabet
Alphabet
An alphabet is a standard set of letters—basic written symbols or graphemes—each of which represents a phoneme in a spoken language, either as it exists now or as it was in the past. There are other systems, such as logographies, in which each character represents a word, morpheme, or semantic...
ic scripts used by some Berber
Berber people
Berbers are the indigenous peoples of North Africa west of the Nile Valley. They are continuously distributed from the Atlantic to the Siwa oasis, in Egypt, and from the Mediterranean to the Niger River. Historically they spoke the Berber language or varieties of it, which together form a branch...
peoples, notably the Tuareg, to write their language.

A modern derivate of the traditional script, known as Neo-Tifinagh, was introduced in the 20th century. It is not in widespread use as a means of daily communication, but often serves to assert a Berber identity
Berberism
Berberism is a political-cultural movement of Berber ethnic nationalism, found mainly in Kabylia, Algeria and later in Morocco...
politically and symbolically.
A slightly modified version of the traditional script, called Tifinagh Ircam, is used in a limited number of Moroccan
Morocco
Morocco , officially the Kingdom of Morocco , is a country located in North Africa. It has a population of more than 32 million and an area of 710,850 km², and also primarily administers the disputed region of the Western Sahara...
elementary schools in teaching the Berber language to children.

The word tifinagh or tifinigh is widely thought to be a feminine plural cognate of Punic, through the feminine prefix ti- and Latin Punicus; thus tifinigh would mean "the Phoenician (letters)".

There are two known variants: eastern and western.
The eastern variant was used in what is now Constantine
Constantine, Algeria
Constantine is the capital of Constantine Province in north-eastern Algeria. It was the capital of the same-named French département until 1962. Slightly inland, it is about 80 kilometres from the Mediterranean coast, on the banks of Rhumel river...
, the Aures region and Tunisia
Tunisia
Tunisia , officially the Tunisian RepublicThe long name of Tunisia in other languages used in the country is: , is the northernmost country in Africa. It is a Maghreb country and is bordered by Algeria to the west, Libya to the southeast, and the Mediterranean Sea to the north and east. Its area...
. It is the best-deciphered variant, due to the discovery of several Numidian bilingual inscriptions in Libyan and Punic (notably at Dougga
Dougga
Dougga or Thugga is an ancient Roman city in northern Tunisia, included in a 65 hectare archaeological site.UNESCO qualified Dougga as a World Heritage Site in 1997, believing that it represents “the best-preserved Roman small town in North Africa”...
in Tunisia.) 22 letters out of the 24 were deciphered.
The western variant was more primitive (Février 1964–1965). It was used along the Mediterranean coast from Kabylia to the Canary Islands
Canary Islands
The Canary Islands , also known as the Canaries , is a Spanish archipelago located just off the northwest coast of mainland Africa, 100 km west of the border between Morocco and the Western Sahara. The Canaries are a Spanish autonomous community and an outermost region of the European Union...
. It used 13 supplementary letters.

The Libyco-Berber script was a pure Abjad
Abjad
An abjad is a type of writing system in which each symbol always or usually stands for a consonant; the reader must supply the appropriate vowel....
; it had no vowels. Gemination
Gemination
In phonetics, gemination happens when a spoken consonant is pronounced for an audibly longer period of time than a short consonant. Gemination is distinct from stress and may appear independently of it....
was not marked. The writing was usually from the bottom to the top, although right-to-left, and even other orders, were also found.

The Proto-Tifinagh script survived as a traditional means of writing the Tuareg language.
Traditionally, the script marks no vowels, except for word finals. In some areas, Arabic vowel diacritics are combined with Tifinagh characters to mark vowels.

Occasionally the script has been used to write other neighboring languages, such as Tagdal Songhai
Songhay languages
The Songhay, Songhai, or Songai languages are a group of closely related languages/dialects centered on the middle stretches of the Niger River in the west African states of Mali, Niger, Benin, Burkina Faso, and Nigeria. They have been widely used as a lingua franca in that region ever since the...
.

Neo-Tifinagh is the 20th-century script developed from earlier forms of Tifinagh. It is an alphabet
Alphabet
An alphabet is a standard set of letters—basic written symbols or graphemes—each of which represents a phoneme in a spoken language, either as it exists now or as it was in the past. There are other systems, such as logographies, in which each character represents a word, morpheme, or semantic...
and is written left-to-right. Salem Chaker, professor at INALCO
Institut national des langues et civilisations orientales
The Institut National des Langues et Civilisations Orientales is located in Paris, France. It was founded in 1795 after the French Revolution and is now one of the country's Grands établissements with a specialization in African, Asian, East European, Oceanian languages and civilisations...
had proposed a change in Neo-Tifinagh (Tafsut 1990 #14).

Until recently, virtually no books or websites were published in this alphabet, with activists favouring Latin (or, more rarely, Arabic) scripts for serious usage; however, it is extremely popular for symbolic use, with many books and websites written in a different script featuring logos or title pages using Neo-Tifinagh. In Morocco, the king took a "neutral" position between the claims of Latin script and Arabic script by adopting the Neo-Tifinagh script in 2003; as a result, books are beginning to be published in this script, and it is taught in some schools. However, many independent Berber-language publications are still published using the Berber Latin alphabet. Outside Morocco, it has no official status. Ironically, the Moroccan state arrested and imprisoned people using this script during the 1980s and 1990s.

In Algeria, almost all Berber publications use the Berber Latin alphabet, not Tifinagh.

In Libya, the regime of Gaddafi used to consistently ban the Berber Tifinagh script from being used in public contexts such as store displays and banners.

After recent uprisings in Libya, the National Transitional Council (rebels) has shown an openness towards the Berber language. The independent rebel Libya TV, based in Qatar, has included the Berber language and the Tifinagh alphabet in some of its programming.

Tifinagh was added to the Unicode
Unicode
Unicode is a computing industry standard for the consistent encoding, representation and handling of text expressed in most of the world's writing systems...
Standard in March, 2005 with the release of version 4.1.