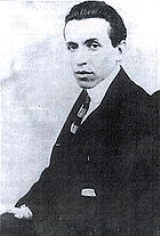 Tibor Szamuely was a Hungarian
Hungary
Hungary , officially the Republic of Hungary , is a landlocked country in Central Europe. It is situated in the Carpathian Basin and is bordered by Slovakia to the north, Ukraine and Romania to the east, Serbia and Croatia to the south, Slovenia to the southwest and Austria to the west. The...
Communist leader.

Szamuely was drafted and fought as a soldier during World War I
World War I
World War I , which was predominantly called the World War or the Great War from its occurrence until 1939, and the First World War or World War I thereafter, was a major war centred in Europe that began on 28 July 1914 and lasted until 11 November 1918...
; in 1915, he was captured by the Russia
Russia
Russia or , officially known as both Russia and the Russian Federation , is a country in northern Eurasia. It is a federal semi-presidential republic, comprising 83 federal subjects...
ns. After the Russian Bolshevik Revolution of 1917, he was released. By then Szamuely had become a Communist. In Moscow
Moscow
Moscow is the capital, the most populous city, and the most populous federal subject of Russia. The city is a major political, economic, cultural, scientific, religious, financial, educational, and transportation centre of Russia and the continent...
he organized a Communist group together with Béla Kun
Béla Kun
Béla Kun , born Béla Kohn, was a Hungarian Communist politician and a Bolshevik Revolutionary who led the Hungarian Soviet Republic in 1919.- Early life :...
among the Hungarian prisoners of war. Many of them, including Szamuely and Kun, joined the Soviet Red Army
Red Army
The Workers' and Peasants' Red Army started out as the Soviet Union's revolutionary communist combat groups during the Russian Civil War of 1918-1922. It grew into the national army of the Soviet Union. By the 1930s the Red Army was among the largest armies in history.The "Red Army" name refers to...
and fought in the Russian Civil War
Russian Civil War
The Russian Civil War was a multi-party war that occurred within the former Russian Empire after the Russian provisional government collapsed to the Soviets, under the domination of the Bolshevik party. Soviet forces first assumed power in Petrograd The Russian Civil War (1917–1923) was a...
on the side of the Bolsheviks. Szamuely later went to Germany
Germany
Germany , officially the Federal Republic of Germany , is a federal parliamentary republic in Europe. The country consists of 16 states while the capital and largest city is Berlin. Germany covers an area of 357,021 km2 and has a largely temperate seasonal climate...
and in December 1918 he took part in the formation of the German Communist Party
Spartacist League
The Spartacus League was a left-wing Marxist revolutionary movement organized in Germany during World War I. The League was named after Spartacus, leader of the largest slave rebellion of the Roman Republic...
with Karl Liebknecht
Karl Liebknecht
was a German socialist and a co-founder with Rosa Luxemburg of the Spartacist League and the Communist Party of Germany. He is best known for his opposition to World War I in the Reichstag and his role in the Spartacist uprising of 1919...
and Rosa Luxemburg
Rosa Luxemburg
Rosa Luxemburg was a Marxist theorist, philosopher, economist and activist of Polish Jewish descent who became a naturalized German citizen...
.

Szamuely was militant in his views and violent and extreme in his choice of methods: in February 1919, as the communists in Budapest became emboldened to challenge the government, he wrote in the pages of the Vörös Újság (Red News): "Everywhere counter-revolutionaries run about and swagger; beat them down! Beat their heads where you find them! If counter-revolutionaries were to gain the upper hand for even a single hour, there will be no mercy for any proletarian. Before they stifle the revolution, suffocate them in their own blood!"

In late May 1919, Szamuely made a trip to Moscow
Moscow
Moscow is the capital, the most populous city, and the most populous federal subject of Russia. The city is a major political, economic, cultural, scientific, religious, financial, educational, and transportation centre of Russia and the continent...
by airplane to campaign for world revolution together with Lenin.

The Hungarian Soviet Republic only lasted for six months. On August 1, 1919, Kun fled as Romania
Romania
Romania is a country located at the crossroads of Central and Southeastern Europe, on the Lower Danube, within and outside the Carpathian arch, bordering on the Black Sea...
n troops approached Budapest. Szamuely managed to evade the anti-Communist reprisals known as the "White Terror
White Terror (Hungary)
The White Terror in Hungary was a two-year period of repressive violence by counter-revolutionary soldiers, with the intent of crushing any vestige of Hungary’s brief Communist revolution. Many of its victims were Jewish.-Background:...
", and fled in his car towards Austria
Austria
Austria , officially the Republic of Austria , is a landlocked country of roughly 8.4 million people in Central Europe. It is bordered by the Czech Republic and Germany to the north, Slovakia and Hungary to the east, Slovenia and Italy to the south, and Switzerland and Liechtenstein to the...
. But after making an illegal border crossing, he was seized by the Austrian authorities and killed. Other sources say upon discovery he committed suicide
Suicide
Suicide is the act of intentionally causing one's own death. Suicide is often committed out of despair or attributed to some underlying mental disorder, such as depression, bipolar disorder, schizophrenia, alcoholism, or drug abuse...
.