.
In the low-energy limit, the electric field of the incident wave (photon) accelerates the charged particle, causing it, in turn, to emit radiation
Bremsstrahlung
Bremsstrahlung is electromagnetic radiation produced by the deceleration of a charged particle when deflected by another charged particle, typically an electron by an atomic nucleus. The moving particle loses kinetic energy, which is converted into a photon because energy is conserved. The term is...
at the same frequency as the incident wave, and thus the wave is scattered.

How to calculate power radiated per unit solid angle?
More

In the low-energy limit, the electric field of the incident wave (photon) accelerates the charged particle, causing it, in turn, to emit radiation
Bremsstrahlung
Bremsstrahlung is electromagnetic radiation produced by the deceleration of a charged particle when deflected by another charged particle, typically an electron by an atomic nucleus. The moving particle loses kinetic energy, which is converted into a photon because energy is conserved. The term is...
at the same frequency as the incident wave, and thus the wave is scattered. Thomson scattering is an important phenomenon in plasma physics and was first explained by the physicist J.J. Thomson. As long as the motion of the particle is non-relativistic
Special relativity
Special relativity is the physical theory of measurement in an inertial frame of reference proposed in 1905 by Albert Einstein in the paper "On the Electrodynamics of Moving Bodies".It generalizes Galileo's...
(i.e. its speed is much less than the speed of light), the main cause of the acceleration of the particle will be due to the electric field component of the incident wave, and the magnetic field can be neglected. The particle will move in the direction of the oscillating electric field, resulting in electromagnetic dipole radiation. The moving particle radiates most strongly in a direction perpendicular to its motion and that radiation will be polarized along the direction of its motion. Therefore, depending on where an observer is located, the light scattered from a small volume element may appear to be more or less polarized. 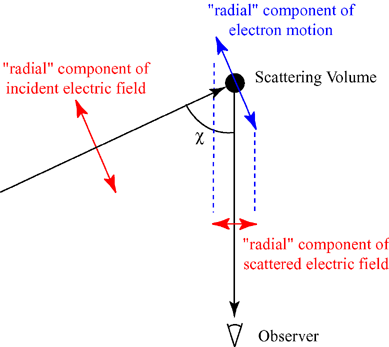 The diagram on the right is in the plane of observation. It shows the radial component of the incident electric field causing a component of motion of the charged particles at the scattering point which also lies in the plane of observation. It can be seen that the amplitude of the wave observed will be proportional to the cosine of χ, the angle between the incident and observed beam. The intensity, which is the square of the amplitude, will then be diminished by a factor of cos2(χ). It can be seen that the tangential components (perpendicular to the plane of the diagram) will not be affected in this way.

where n is the density of charged particles at the scattering point, I is incident flux (i.e. energy/time/area/wavelength) and

is the Thomson cross section
Cross section (physics)
A cross section is the effective area which governs the probability of some scattering or absorption event. Together with particle density and path length, it can be used to predict the total scattering probability via the Beer-Lambert law....
for the charged particle, defined below. The total energy radiated by a volume element

in time dt between wavelengths λ and λ+dλ is found by integrating the sum of the emission coefficients over all directions (solid angle):

The Thomson differential cross section, related to the sum of the emissivity coefficients, is given by

where the first expression is in cgs units, the second in SI
Si
Si, si, or SI may refer to :- Measurement, mathematics and science :* International System of Units , the modern international standard version of the metric system...
units; q is the charge per particle, m the mass of particle, and

The important feature is that the cross section is independent of photon frequency. Note that the cross section is simply proportional (by a numerical factor) to the square of the classical radius
Classical electron radius
The classical electron radius, also known as the Lorentz radius or the Thomson scattering length, is based on a classical relativistic model of the electron...
of a point particle of mass m and charge q:

For an electron, the Thomson cross-section is numerically given by:

The cosmic microwave background is thought to be linearly polarized as a result of Thomson scattering. Probes such as WMAP and the current Planck
Planck Surveyor
Planck is a space observatory of the European Space Agency and designed to observe the anisotropies of the cosmic microwave background over the entire sky, at a high sensitivity and angular resolution...
mission attempt to measure this polarization.

The solar K-corona is the result of the Thomson scattering of solar radiation from solar coronal electrons. NASA's STEREO
STEREO
STEREO is a solar observation mission. Two nearly identical spacecraft were launched into orbits that cause them to respectively pull farther ahead of and fall gradually behind the Earth...
mission will generate three-dimensional images of the electron density around the sun by measuring this K-corona from two separate satellites.

In tokamak
Tokamak
A tokamak is a device using a magnetic field to confine a plasma in the shape of a torus . Achieving a stable plasma equilibrium requires magnetic field lines that move around the torus in a helical shape...
s and other experimental fusion
Fusion power
Fusion power is the power generated by nuclear fusion processes. In fusion reactions two light atomic nuclei fuse together to form a heavier nucleus . In doing so they release a comparatively large amount of energy arising from the binding energy due to the strong nuclear force which is manifested...
devices, the electron temperatures and densities in the plasma
Plasma (physics)
In physics and chemistry, plasma is a state of matter similar to gas in which a certain portion of the particles are ionized. Heating a gas may ionize its molecules or atoms , thus turning it into a plasma, which contains charged particles: positive ions and negative electrons or ions...
can be measured with high accuracy by detecting the effect of Thomson scattering of a high-intensity laser
Laser
A laser is a device that emits light through a process of optical amplification based on the stimulated emission of photons. The term "laser" originated as an acronym for Light Amplification by Stimulated Emission of Radiation...
beam.