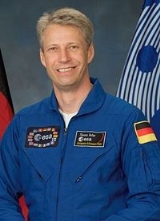 In 1982, Reiter received his diploma
Diploma
A diploma is a certificate or deed issued by an educational institution, such as a university, that testifies that the recipient has successfully completed a particular course of study or confers an academic degree. In countries such as the United Kingdom and Australia, the word diploma refers to...
in aerospace engineering
Aerospace engineering
Aerospace engineering is the primary branch of engineering concerned with the design, construction and science of aircraft and spacecraft. It is divided into two major and overlapping branches: aeronautical engineering and astronautical engineering...
from the Bundeswehr University Munich. In 2010 the university awarded him an honorary doctoral degree. He completed his training as a pilot
Aviator
An aviator is a person who flies an aircraft. The first recorded use of the term was in 1887, as a variation of 'aviation', from the Latin avis , coined in 1863 by G. de la Landelle in Aviation Ou Navigation Aérienne...
in Germany
Germany
Germany , officially the Federal Republic of Germany , is a federal parliamentary republic in Europe. The country consists of 16 states while the capital and largest city is Berlin. Germany covers an area of 357,021 km2 and has a largely temperate seasonal climate...
and Texas
Texas
Texas is the second largest U.S. state by both area and population, and the largest state by area in the contiguous United States.The name, based on the Caddo word "Tejas" meaning "friends" or "allies", was applied by the Spanish to the Caddo themselves and to the region of their settlement in...
.

He served as an onboard engineer for the Euromir 95/Soyuz TM-22
Soyuz TM-22
-Crew:-Mission highlights:23rd expedition to Mir.Soyuz TM-22 was a Russian transport spacecraft that transported cosmonauts to the Mir space station for a 135-day stay. It was launched from the Baikonur Cosmodrome and docked on September 5, 1995 with Mir's Kvant-2 module at the port that was...
mission to the Mir
Mir
Mir was a space station operated in low Earth orbit from 1986 to 2001, at first by the Soviet Union and then by Russia. Assembled in orbit from 1986 to 1996, Mir was the first modular space station and had a greater mass than that of any previous spacecraft, holding the record for the...
space station
Space station
A space station is a spacecraft capable of supporting a crew which is designed to remain in space for an extended period of time, and to which other spacecraft can dock. A space station is distinguished from other spacecraft used for human spaceflight by its lack of major propulsion or landing...
. During his 179 days aboard Mir, he carried out two EVAs
Extra-vehicular activity
Extra-vehicular activity is work done by an astronaut away from the Earth, and outside of a spacecraft. The term most commonly applies to an EVA made outside a craft orbiting Earth , but also applies to an EVA made on the surface of the Moon...
and became the first German astronaut to perform a spacewalk.

Between 1996 and 1997, he underwent additional training on the Soyuz spacecraft
Soyuz spacecraft
Soyuz , Union) is a series of spacecraft initially designed for the Soviet space programme by the Korolyov Design Bureau in the 1960s, and still in service today...
and was awarded a "Soyuz Return Commander" certificate, qualifying him to command a three-person Soyuz crew during its return from space.

His ISS mission was designated Astrolab by the European Space Agency.

Reiter has logged just over 350 days in space, the most by any non-American or non-Russian.

On August 8, 2007 Thomas Reiter was named a member of DLR
German Aerospace Center
The German Aerospace Center is the national centre for aerospace, energy and transportation research of the Federal Republic of Germany. It has multiple locations throughout Germany. Its headquarters are located in Cologne. It is engaged in a wide range of research and development projects in...
's executive board.

On March 17, 2011 he was appointed ESA's Director of Human Spaceflight and Operations, responsible for all manned and unmanned mission operations. This includes the operation and exploitation of the European International Space Station elements, ESA's Autonomous Transfer Vehicle, the responsibility for the European Astronaut Centre, EAC, and ESA's unmanned missions and ground-based mission infrastructure.