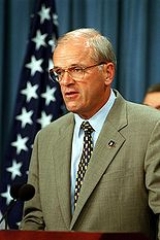 In 1963 White graduated from Cass Technical High School
Cass Technical High School
The Cass Tech Technicians football team is a high school football program in Division 1 Public School League, representing the prestigious Cass Technical High School in Detroit, MI. Cass Tech High School has long been recognized nationwide for its extraordinary football program dating back to its...
in Detroit. He was a part of the JROTC program at Cass Tech, which is highly ranked every year in military competition. In 1967, White graduated from the United States Military Academy
United States Military Academy
The United States Military Academy at West Point is a four-year coeducational federal service academy located at West Point, New York. The academy sits on scenic high ground overlooking the Hudson River, north of New York City...
at West Point and was commissioned in the United States Army
United States Army
The United States Army is the main branch of the United States Armed Forces responsible for land-based military operations. It is the largest and oldest established branch of the U.S. military, and is one of seven U.S. uniformed services...
. In 1974, he received a degree in Operations Research
Operations research
Operations research is an interdisciplinary mathematical science that focuses on the effective use of technology by organizations...
from the Naval Postgraduate School
Naval Postgraduate School
The Naval Postgraduate School is an accredited research university operated by the United States Navy. Located in Monterey, California, it grants master's degrees, Engineer's degrees and doctoral degrees...
, Monterey, California
Monterey, California
The City of Monterey in Monterey County is located on Monterey Bay along the Pacific coast in Central California. Monterey lies at an elevation of 26 feet above sea level. As of the 2010 census, the city population was 27,810. Monterey is of historical importance because it was the capital of...
. In 1984, he attended the United States Army War College, Carlisle, Pennsylvania
Carlisle, Pennsylvania
Carlisle is a borough in and the county seat of Cumberland County, Pennsylvania, United States. The name is traditionally pronounced with emphasis on the second syllable. Carlisle is located within the Cumberland Valley, a highly productive agricultural region. As of the 2010 census, the borough...
.

During a long military career, that included two tours of duty in Vietnam
Vietnam War
The Vietnam War was a Cold War-era military conflict that occurred in Vietnam, Laos, and Cambodia from 1 November 1955 to the fall of Saigon on 30 April 1975. This war followed the First Indochina War and was fought between North Vietnam, supported by its communist allies, and the government of...
, he served in a variety of capacities including:


In 1989, White was appointed executive assistant to the then chairman of the Joint Chiefs of Staff
Joint Chiefs of Staff
The Joint Chiefs of Staff is a body of senior uniformed leaders in the United States Department of Defense who advise the Secretary of Defense, the Homeland Security Council, the National Security Council and the President on military matters...
General Colin Powell
Colin Powell
Colin Luther Powell is an American statesman and a retired four-star general in the United States Army. He was the 65th United States Secretary of State, serving under President George W. Bush from 2001 to 2005. He was the first African American to serve in that position. During his military...
, where he was described in The Washington Post
The Washington Post
The Washington Post is Washington, D.C.'s largest newspaper and its oldest still-existing paper, founded in 1877. Located in the capital of the United States, The Post has a particular emphasis on national politics. D.C., Maryland, and Virginia editions are printed for daily circulation...
by a mutual friend as Powell's "alter ego" in "a job that requires tremendous political sophistication." In July, 1990 White retired from the Army with the rank of Brigadier General
Brigadier general (United States)
A brigadier general in the United States Army, Air Force, and Marine Corps, is a one-star general officer, with the pay grade of O-7. Brigadier general ranks above a colonel and below major general. Brigadier general is equivalent to the rank of rear admiral in the other uniformed...
.

In 1990 White entered the private sector as Vice-Chairman of Enron Energy Services (E.E.S.), a subsidiary of the Enron Corporation responsible for providing energy outsource solutions. According to his original Department of Defense biography White was responsible for the delivery component of energy management services, which included;


He was responsible for the Enron Engineering and Construction Company, which managed an extensive construction portfolio with domestic and international projects. White also served as a member of Enron's Executive Committee and was Chairman and Chief Executive Officer for Enron Operations Corporation.


Appointment as Secretary of the Army

White was a controversial choice for Government service despite his long military service due to his most recent appointment at the Enron Corporation. U.S. Secretary of Defense Donald Rumsfeld
Donald Rumsfeld
Donald Henry Rumsfeld is an American politician and businessman. Rumsfeld served as the 13th Secretary of Defense from 1975 to 1977 under President Gerald Ford, and as the 21st Secretary of Defense from 2001 to 2006 under President George W. Bush. He is both the youngest and the oldest person to...
however had decided to make corporate experience one of the key requirements in his appointees.

White was sworn in on May 31, 2001 as 18th Secretary of the Army and was responsible for all matters relating to Army manpower, personnel, reserve affairs, installations, environmental issues, weapons systems and equipment acquisition, communications, and financial management. He led a work-force of over one million active duty, National Guard and Army Reserve soldiers and 270,000 civilian employees, he had stewardship over 15 million acres (60,000 km²) of land and an annual budget of nearly $70 billion.

White was immediately embroiled in controversy regarding his previous employment with Enron and what he may have known about some of Enron's questionable business practices. His retention of a sizable amount of Enron stock fueled the perception of a conflict interest.

In 2002, White became involved with a dispute with Donald Rumsfeld
Donald Rumsfeld
Donald Henry Rumsfeld is an American politician and businessman. Rumsfeld served as the 13th Secretary of Defense from 1975 to 1977 under President Gerald Ford, and as the 21st Secretary of Defense from 2001 to 2006 under President George W. Bush. He is both the youngest and the oldest person to...
over the proposed cancellation of the Army's Crusader artillery project
XM2001 Crusader
The XM2001 Crusader was to be the United States Army's next-generation self-propelled howitzer , designed to improve survivability, lethality, mobility, and effectiveness and planned to be introduced by 2008. United Defense was the prime contractor; General Dynamics the major subcontractor...
. White supported the Army view that the Crusader was vital to the Army's future and circulated "talking points" for congressional discussions extolling its value. However, Rumsfeld decided it was not suited for wars of the future and eventually canceled the program.

In 2003, White refused to publicly rebuke GEN Eric Shinseki for his statement to the Senate Armed services committee that it would take "something in the order of several hundred thousand soldiers" to occupy Iraq after invasion. This, combined with White's actions on the Crusader, disagreements with Rumfeld on the Stryker project, and his distracting association with Enron including the selling of restricted Enron stock through “private investments” (derivatives), prompted Rumsfeld to demand White's resignation. White resigned on April 25, 2003.

While serving as Vice Chairman of Enron Energy Services White had actively pursued military contracts for the company and in 1999 had secured a prototype deal at Fort Hamilton
Fort Hamilton
Historic Fort Hamilton is located in the southwestern corner of the New York City borough of Brooklyn surrounded by the communities of Bay Ridge, Dyker Heights, and Bensonhurst, and is one of several posts that are part of the region which is headquartered by the Military District of Washington...
for privatising the power supply of army bases. Enron had been the only bidder for this deal after White had controversially used his government and military contacts to secure key concessions.

In his first speech just “two weeks after he became secretary of the Army, White vowed to speed up the awarding of such contracts”; as the Enron Ft. Hamilton contract, despite the fact that he still held a considerable interest in Enron. A Pentagon spokeswoman responded to suggestions of a possible conflict of interests by saying that “Defense Secretary Donald Rumsfeld sees no conflict and has complete confidence in the Army secretary”.

The Washington Post reported that in late October 2001, White made numerous phone calls to Enron executives including Vice President Jude Rolfes, former CEO Jeff Skilling and President current CEO Ken Lay. Shortly after the calls were made, White unloaded 200,000 Enron shares for $12 million. The L.A. Times reported that White had brief conversations with Rumsfeld in November and Powell in December, the focus of which were "a concern on their part for the impact that the bankruptcy of Enron may have had on my personal well-being. My response in both cases was that I had suffered significant personal losses but that I would persevere."

The New York Times reported that in late January 2002, Rep. Henry Waxman requested a meeting with White regarding the military contracts and the irregularities with the accounting at E.E.S. stating “you are in a unique position because you are the person in government who has the most intimate knowledge of Enron”. Furthermore the Washington Post reported that at this time White still held interests in Enron, including a claim on 50,000 stock options and an annuity paid by the company, despite having promised to divest himself at his confirmation hearing 8 months earlier. This earned him a rebuke from Sens. Carl Levin (D-Mich.) and John Warner (R-Va.) of the Senate Armed Services Committee. He was also accused in the Washington Post of Misuse of Government Property, by allegedly using military jets for personal trips for himself and his wife. In July, following news reports of the company’s involvement in the 2000-2001 California electricity crisis
California electricity crisis
The California electricity crisis, also known as the Western U.S. Energy Crisis of 2000 and 2001 was a situation in which California had a shortage of electricity caused by market manipulations and illegal shutdowns of pipelines by Texas energy consortiums...
, White denied his involvement under oath before the Senate Commerce Committee.
The source of this article is wikipedia, the free encyclopedia.  The text of this article is licensed under the GFDL.