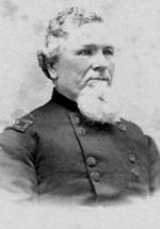 Duncan was born in Kaskaskia, Illinois
Kaskaskia, Illinois
Kaskaskia is a village in Randolph County, Illinois, United States. In the 2010 census the population was 14, making it the second-smallest incorporated community in the State of Illinois in terms of population. A major French colonial town of the Illinois Country, its peak population was about...
. He began his military career at age 13, serving as a private in the Illinois Mounted Volunteers in 1832 during the Black Hawk War
Black Hawk War
The Black Hawk War was a brief conflict fought in 1832 between the United States and Native Americans headed by Black Hawk, a Sauk leader. The war erupted soon after Black Hawk and a group of Sauks, Meskwakis, and Kickapoos known as the "British Band" crossed the Mississippi River into the U.S....
. In 1846, he was appointed from Illinois as a first lieutenant in the U. S. Mounted Rifles. He served during the Mexican-American War, and was engaged in the siege and surrender of Veracruz
Veracruz, Veracruz
Veracruz, officially known as Heroica Veracruz, is a major port city and municipality on the Gulf of Mexico in the Mexican state of Veracruz. The city is located in the central part of the state. It is located along Federal Highway 140 from the state capital Xalapa, and is the state's most...
.

Following the war, he remained in the Regular Army
Regular Army
The Regular Army of the United States was and is the successor to the Continental Army as the country's permanent, professional military establishment. Even in modern times the professional core of the United States Army continues to be called the Regular Army...
. He became the commander of the 5th U.S. cavalry in July 1866. During this time, William "Buffalo Bill" Cody served as a scout for the regiment. Duncan later commanded the District of Nashville until September 1868. He then was ordered to the Department of the Platte
Department of the Platte
The Department of the Platte was a military administrative district established by the U.S. Army on March 5, 1866, with boundaries encompassing Iowa, Nebraska, Dakota Territory, Utah Territory and a small portion of Idaho...
, was stationed successively at Fort McPherson
Fort McPherson
Fort McPherson was a U.S. Army military base located in East Point, Georgia, on the southwest edge of the City of Atlanta, Ga. It was the headquarters for the U.S. Army Installation Management Command, Southeast Region; the U.S. Army Forces Command; the U.S. Army Reserve Command; the U.S...
and Fort D. A. Russell
Fort D. A. Russell
Fort D.A. Russell was the name of two United States Military posts:*Fort D.A. Russell , Cheyenne, Wyoming*Fort D.A. Russell , Marfa, Texas...
, and was afterward in charge of the construction of Sidney Barracks. Lingering complications from his wound compelled him to be medically retired from active service in January 1873.

Though his permanent rank was lieutenant colonel
Lieutenant Colonel (United States)
In the United States Army, United States Air Force, and United States Marine Corps, a lieutenant colonel is a field grade military officer rank just above the rank of major and just below the rank of colonel. It is equivalent to the naval rank of commander in the other uniformed services.The pay...
, Thomas Duncan received several brevet
Brevet (military)
In many of the world's military establishments, brevet referred to a warrant authorizing a commissioned officer to hold a higher rank temporarily, but usually without receiving the pay of that higher rank except when actually serving in that role. An officer so promoted may be referred to as being...
s, including that of brigadier general, for his services during the Civil War.