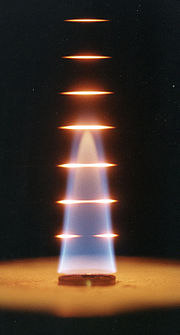 Thin Filament Pyrometry (TFP) is an optical method used to measure temperatures. It involves the placement of a thin filament in a hot gas stream. Radiative emissions from the filament can be correlated with filament temperature. Filaments are typically Silicon carbide
Silicon carbide
Silicon carbide , also known as carborundum, is a compound of silicon and carbon with chemical formula SiC. It occurs in nature as the extremely rare mineral moissanite. Silicon carbide powder has been mass-produced since 1893 for use as an abrasive...
(SiC
SIC
Sic is a Latin word that means "thus" or, in writing, "it was thus in the source material".Sic may also refer to:* Sic, Cluj, a commune in Romania* SiC, Silicon carbide, a semiconducting material, also used to make metalworking tools from...
) fibers with a diameter of 15 micrometres. Temperatures of about 800 - 2500 K can be measured.

The typical TFP apparatus consists of a flame
Flame
A flame is the visible , gaseous part of a fire. It is caused by a highly exothermic reaction taking place in a thin zone...
or other hot gas stream, a filament, and a camera.

TFP has several advantages, including the ability to simultaneously measure temperatures along a line and minimal intrusiveness. Most other forms of pyrometry are not capable of providing gas-phase temperatures.

Calibration is required. Calibration typically is performed with a thermocouple
Thermocouple
A thermocouple is a device consisting of two different conductors that produce a voltage proportional to a temperature difference between either end of the pair of conductors. Thermocouples are a widely used type of temperature sensor for measurement and control and can also be used to convert a...
. Both thermocouples and filaments require corrections in estimating gas temperatures from probe temperatures. Also, filaments are fragile and typically break after about an hour in a flame.
The source of this article is wikipedia, the free encyclopedia.  The text of this article is licensed under the GFDL.