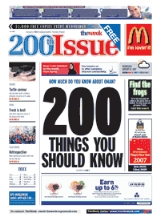 Encyclopedia
TheWeek is a free, 48-page, all-colour, independent weekly newspaper published from Muscat
Muscat, Oman
Muscat is the capital of Oman. It is also the seat of government and largest city in the Governorate of Muscat. As of 2008, the population of the Muscat metropolitan area was 1,090,797. The metropolitan area spans approximately and includes six provinces called wilayats...
in the Sultanate of Oman. Oman’s first free newspaper was launched in March 2003 and has now gone on to gather what is believed to be the largest readership for any publication in Oman. Ms Mohana Prabhakar is the managing editor of the publication. Theweek is audited by BPA Worldwide
BPA Worldwide
BPA Worldwide audits the circulation of business-to-business and consumer magazines. It also provides audit services for newspapers, Web sites, events, email newsletters, digital magazines and other advertiser-supported media produced by its members. Membership comes from the media owners and...
, which has certified its circulation as being a weekly average of 50,300.

Theweek is the first and so far, only publication in Oman to be audited. The results of the audit were first announced in January 2007 and have reinforced the market perception of the publication being a clear leader in terms of readership and reach. A survey done by Apex Press and Publishing, says that TheWeek has an average readership of 178,000.

Free copies of Theweek, published every Wednesday, are available from outlets spread across the main urban areas in Oman, including Muscat, Sohar
Sohar
Sohar is the most developed city in Sultanate of Oman outside the capital Muscat. It is about 200 kilometers north of Muscat. Sohar was an ancient capital of Oman and many believe it to be the birthplace of Sinbad the Sailor...
, Sur
Sur, Oman
Sur is a capital city of Ash Sharqiyah Region, northeastern Oman, on the coast of the Gulf of Oman. It is located at around , and is 93 miles southeast of the Omani capital Muscat. Historically the city is known for being an important destination point for sailors...
, Nizwa
Nizwa
-Attractions:The main tourist attractions in the city are Nizwa Fort, the traditional Souq and Falaj Daris. In the 1990s, the Jama, the fort and the souq which sit next to each other in the centre were renovated using the same traditional materials...
and Salalah
Salalah
Salalah , is the capital and seat of the governor or Wali of the southern Omani province of Dhofar. The population of Salalah was 197,169 in 2009....
. It covers mostly local Oman-based news, including coverage of government policy, civic initiatives, celebrity features, local events and sports. It usually does not take any political news position.

The newspaper is published by Apex Press and Publishing, which was instrumental in introducing the concept of a 'free' newspaper in the Oman market. TheWeek reportedly gets its revenues from advertising. Contests that are run in the paper including the crossword, wordsearch and find the (hidden) Frog as well as games like Sudoku
Sudoku
is a logic-based, combinatorial number-placement puzzle. The objective is to fill a 9×9 grid with digits so that each column, each row, and each of the nine 3×3 sub-grids that compose the grid contains all of the digits from 1 to 9...
and wordbuster.
The source of this article is wikipedia, the free encyclopedia.  The text of this article is licensed under the GFDL.