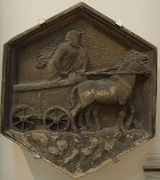 Overview
Thespis of Icaria (present-day Dionysos, Greece
Dionysos, Greece
Dionysos is a residential suburb and a municipality in northeastern Attica, Greece — just about 23 km northeast of Athens. The seat of the municipality is the town Agios Stefanos. Dionysos is almost purely residential, but there are a few shops....
) (6th century BC), according to certain Ancient Greek
Ancient Greece
Ancient Greece is a civilization belonging to a period of Greek history that lasted from the Archaic period of the 8th to 6th centuries BC to the end of antiquity. Immediately following this period was the beginning of the Early Middle Ages and the Byzantine era. Included in Ancient Greece is the...
sources and especially Aristotle
Aristotle
Aristotle was a Greek philosopher and polymath, a student of Plato and teacher of Alexander the Great. His writings cover many subjects, including physics, metaphysics, poetry, theater, music, logic, rhetoric, linguistics, politics, government, ethics, biology, and zoology...
, was the first person ever to appear on stage as an actor
Actor
An actor is a person who acts in a dramatic production and who works in film, television, theatre, or radio in that capacity...
playing a character in a play
Play (theatre)
A play is a form of literature written by a playwright, usually consisting of scripted dialogue between characters, intended for theatrical performance rather than just reading. There are rare dramatists, notably George Bernard Shaw, who have had little preference whether their plays were performed...
(instead of speaking as him or herself). In other sources, he is said to have introduced the first principal actor in addition to the chorus.

According to Aristotle
Aristotle
Aristotle was a Greek philosopher and polymath, a student of Plato and teacher of Alexander the Great. His writings cover many subjects, including physics, metaphysics, poetry, theater, music, logic, rhetoric, linguistics, politics, government, ethics, biology, and zoology...
, writing nearly two centuries later, Thespis was a singer of dithyramb
Dithyramb
The dithyramb was an ancient Greek hymn sung and danced in honour of Dionysus, the god of wine and fertility; the term was also used as an epithet of the god: Plato, in The Laws, while discussing various kinds of music mentions "the birth of Dionysos, called, I think, the dithyramb." Plato also...
s (songs about stories from mythology with choric refrain
Refrain
A refrain is the line or lines that are repeated in music or in verse; the "chorus" of a song...
s).