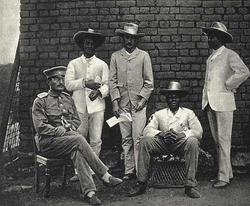 Theodor Gotthilf Leutwein (9 May 1849 - 13 April 1921) was colonial administrator of German Southwest Africa from 1894-1904. Born in Strümpfelbrunn in the Grand Duchy of Baden
Grand Duchy of Baden
The Grand Duchy of Baden was a historical state in the southwest of Germany, on the east bank of the Rhine. It existed between 1806 and 1918.-History:...
, he replaced Curt von François
Curt von Francois
Curt Karl Bruno von François was a military and political figure in the early days of German colonialism in Africa. He is remembered as one of the pioneers of German Southwest Africa ....
as commander of the Schutztruppe
Schutztruppe
Schutztruppe was the African colonial armed force of Imperial Germany from the late 19th century to 1918, when Germany lost its colonies. Similar to other colonial forces, the Schutztruppe consisted of volunteer European commissioned and non-commissioned officers, medical and veterinary officers. ...
(Imperial Security Troop) in 1894. His personal goal in German Southwest Africa was to create "colonialism without bloodshed".

During his tenure there, Leutwein created a decentralized administration with three regional centers in Windhoek
Windhoek
Windhoek is the capital and largest city of the Republic of Namibia. It is located in central Namibia in the Khomas Highland plateau area, at around above sea level. The 2001 census determined Windhoek's population was 233,529...
, Otjimbingwe
Otjimbingwe
Otjimbingwe is a settlement in the Erongo Region of central Namibia. It has approximately 8000 inhabitants.The Rhenish Mission Society used Otjimbingwe as a central location for their Namibian mission in 1849. Johannes Rath and his family settled in the area on 11 July that year, and the settlement...
and Keetmanshoop
Keetmanshoop
Keetmanshoop is a city in Karas Region, southern Namibia, lying on the Trans-Namib Railway from Windhoek to Upington in South Africa. It is named after Johann Keetman, a German industrialist and founder of the city....
.
The construction of the first railroad between Windhoek and the seaport of Swakopmund
Swakopmund
Swakopmund is a city on the coast of northwestern Namibia, west of Windhoek, Namibia's capital. It is the capital of the Erongo administrative district. As a seaside resort, the weather is cooler here in December to January so the territorial administration moves to Swakopmund for these months...
was built during his rule.

His policies with the native Africans, which he called the "Leutwein System", was a mixture of diplomacy and military coercion. His relationship with the indigenous Namaqua
Namaqua
Nama are an African ethnic group of South Africa, Namibia and Botswana. They traditionally speak the Nama language of the Khoe-Kwadi language family, although many Nama now speak Afrikaans. The Nama are the largest group of the Khoikhoi people, most of whom have largely disappeared as a group,...
and Herero tribes were tenuous at best. Conversely, he was often criticized by German colonists as being too lenient with the Africans. In 1904 an uprising by the Herero
Herero and Namaqua Genocide
The Herero and Namaqua Genocide is considered to have been the first genocide of the 20th century. It took place between 1904 and 1907 in German South-West Africa , during the scramble for Africa...
was the beginning of the end of his colonial leadership. Soon afterwards, William II, German Emperor
William II, German Emperor
Wilhelm II was the last German Emperor and King of Prussia, ruling the German Empire and the Kingdom of Prussia from 15 June 1888 to 9 November 1918. He was a grandson of the British Queen Victoria and related to many monarchs and princes of Europe...
, replaced Leutwein with the notorious General Lothar von Trotha
Lothar von Trotha
Adrian Dietrich Lothar von Trotha was a German military commander widely condemned for his conduct of the Herero Wars in South-West Africa, especially for the events that led to the near-extermination of the Herero....
. In May 1904 he admitted that the Germans had not taken one Herero prisoner, following an inquiry by the social democratic
Social democracy
Social democracy is a political ideology of the center-left on the political spectrum. Social democracy is officially a form of evolutionary reformist socialism. It supports class collaboration as the course to achieve socialism...
Reichstag
Reichstag (German Empire)
The Reichstag was the parliament of the North German Confederation , and of the German Reich ....
deputy August Bebel
August Bebel
Ferdinand August Bebel was a German Marxist politician, writer, and orator. He is best remembered as one of the founders of the Social Democratic Party of Germany.-Early years:...
.

In 1906, Leutwein published an autobiography, Elf Jahre als Gouverneur in Deutsch-Südwestafrika ("Eleven Years as Governor in German South-West Africa"), an historical account of his career in German Southwest Africa. He died in Freiburg
Freiburg
Freiburg im Breisgau is a city in Baden-Württemberg, Germany. In the extreme south-west of the country, it straddles the Dreisam river, at the foot of the Schlossberg. Historically, the city has acted as the hub of the Breisgau region on the western edge of the Black Forest in the Upper Rhine Plain...
.