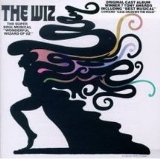 Overview
The Wiz: The Super Soul Musical "Wonderful Wizard of Oz" is a musical
Musical theatre
Musical theatre is a form of theatre combining songs, spoken dialogue, acting, and dance. The emotional content of the piece – humor, pathos, love, anger – as well as the story itself, is communicated through the words, music, movement and technical aspects of the entertainment as an...
with music and lyrics by Charlie Smalls
Charlie Smalls
Charlie Smalls was an African-American composer and songwriter, best known for writing the music for the 1975 Broadway musical The Wiz....
and book by William F. Brown
William F. Brown (writer)
William Ferdinand Brown is an American playwright best known for writing the book of the musical, The Wiz , an adaptation of L...
. It is a retelling of L. Frank Baum
L. Frank Baum
Lyman Frank Baum was an American author of children's books, best known for writing The Wonderful Wizard of Oz...
's The Wonderful Wizard of Oz
The Wonderful Wizard of Oz
The Wonderful Wizard of Oz is a children's novel written by L. Frank Baum and illustrated by W. W. Denslow. Originally published by the George M. Hill Company in Chicago on May 17, 1900, it has since been reprinted numerous times, most often under the name The Wizard of Oz, which is the name of...
in the context of African American culture
African American culture
African-American culture, also known as black culture, in the United States refers to the cultural contributions of Americans of African descent to the culture of the United States, either as part of or distinct from American culture. The distinct identity of African-American culture is rooted in...
. It opened on October 21, 1974 at the Morris A. Mechanic Theatre
Morris A. Mechanic Theatre
The Morris A. Mechanic Theatre is a playhouse at 1 North Charles Street that is part of the Charles Center of Baltimore, Maryland. The theatre was built by and named for owner Morris A. Mechanic who operated a number of theatres in the city.-History:...
in Baltimore, Maryland and moved to the Majestic Theatre (not the same Majestic Theatre
Majestic Theatre (Columbus Circle)
The Majestic Theatre was a now demolished theatre located at 5 Columbus Circle, the present site of the Time Warner Center. Designed in 1903 by John H. Duncan, the architect of Grant's Tomb, that theatre hosted original musicals, including The Wizard of Oz and Babes in Toyland, and briefly served...
that played The Wizard of Oz
The Wizard of Oz (1902 stage play)
The Wizard of Oz was a 1902 musical extravaganza based on The Wonderful Wizard of Oz by L. Frank Baum, which was originally published in 1900...
in 1903, which was on Columbus Circle
Columbus Circle
Columbus Circle, named for Christopher Columbus, is a major landmark and point of attraction in the New York City borough of Manhattan, located at the intersection of Eighth Avenue, Broadway, Central Park South , and Central Park West, at the southwest corner of Central Park. It is the point from...
, where Time Warner Center
Time Warner Center
The Time Warner Center is a mixed-use skyscraper developed by AREA Property Partners and The Related Companies in New York City. Its design, by David Childs of Skidmore, Owings & Merrill, consists of two 750 ft towers bridged by a multi-story atrium containing upscale retail shops...
now stands) with a new cast on January 5, 1975.

The 1975 Broadway
Broadway theatre
Broadway theatre, commonly called simply Broadway, refers to theatrical performances presented in one of the 40 professional theatres with 500 or more seats located in the Theatre District centered along Broadway, and in Lincoln Center, in Manhattan in New York City...
production won seven Tony Award
Tony Award
The Antoinette Perry Award for Excellence in Theatre, more commonly known as a Tony Award, recognizes achievement in live Broadway theatre. The awards are presented by the American Theatre Wing and The Broadway League at an annual ceremony in New York City. The awards are given for Broadway...
s, including Best Musical
Tony Award for Best Musical
This is a list of winners and nominations for the Tony Award for Best Musical, first awarded in 1949. This award is presented to the producers of the musical.-1940s:* 1949: Kiss Me, Kate – Music and lyrics by Cole Porter, book by Samuel and Bella Spewack...
.

I can't see how goin' south 125th street ever made anybody's life better.

You mean I could have gone home...by clicking my heels three times?

You never needed anything from a fake wizard anyway

Is today the day you're gonna help me down from here?

oh, what I wouldn't give to be in shock...just once

The genius who created me only took care of my dashing good looks, my razor sharp wit and my irresistible attraction to the wrong women. What he forgot to add...was a heart

What would I do if I could suddenly feel?