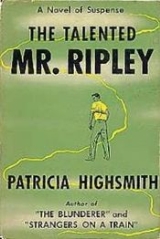 Tom Ripley is a young man struggling to make a living in New York City
New York City
New York is the most populous city in the United States and the center of the New York Metropolitan Area, one of the most populous metropolitan areas in the world. New York exerts a significant impact upon global commerce, finance, media, art, fashion, research, technology, education, and...
by whatever means necessary, including a series of small-time confidence scams. One day, he is approached by shipping magnate Herbert Greenleaf to travel to Italy
Italy
Italy , officially the Italian Republic languages]] under the European Charter for Regional or Minority Languages. In each of these, Italy's official name is as follows:;;;;;;;;), is a unitary parliamentary republic in South-Central Europe. To the north it borders France, Switzerland, Austria and...
to persuade Greenleaf's errant son, Dickie, to return to the United States
United States
The United States of America is a federal constitutional republic comprising fifty states and a federal district...
and join the family business. Ripley agrees, exaggerating his friendship with Dickie, a half-remembered acquaintance, in order to gain the elder Greenleaf's trust.

Shortly after his arrival in Italy, Ripley meets Dickie and his friend Marge Sherwood; although Ripley ingratiates himself with Dickie, Marge doesn't seem to like him very much. As Ripley and Dickie spend more time together, Marge feels left out and begins insinuating to Dickie that Ripley is gay
Gay
Gay is a word that refers to a homosexual person, especially a homosexual male. For homosexual women the specific term is "lesbian"....
. Ripley then surprises Dickey in his bedroom dressed up in Greenleaf's clothes and imitating his mannerisms. Dickie is upset, and from this moment on Ripley senses that his wealthy friend has begun to tire of him, resenting his constant presence and growing personal dependence. Ripley has indeed become obsessed with Dickie, which is further reinforced by his desire to imitate and maintain the wealthy lifestyle Dickie has afforded him.

As a gesture to Ripley, Dickie agrees to travel with him on a short holiday to Sanremo
Sanremo
Sanremo or San Remo is a city with about 57,000 inhabitants on the Mediterranean coast of western Liguria in north-western Italy. Founded in Roman times, the city is best known as a tourist destination on the Italian Riviera. It hosts numerous cultural events, such as the Sanremo Music Festival...
. Sensing that Dickie is about to cut him loose, Ripley finally decides to murder him and assume his identity. When the two set sail in a small rented boat, Ripley beats him to death with an oar, dumps his anchor-weighted body into the water and scuttles the boat.

Ripley assumes Dickie's identity, living off the latter's trust fund and carefully providing communications to Marge to assure her that Dickie has dumped her. Freddie Miles, an old friend of Dickie's from the same social set, encounters Ripley at what he supposes to be Dickie's apartment in Rome
Rome
Rome is the capital of Italy and the country's largest and most populated city and comune, with over 2.7 million residents in . The city is located in the central-western portion of the Italian Peninsula, on the Tiber River within the Lazio region of Italy.Rome's history spans two and a half...
. He soon suspects something is wrong. When Miles finally confronts him, Ripley kills him with an ashtray. He later disposes of the body on the outskirts of Rome, attempting to make police believe that Miles has been murdered by robbers.

Ripley enters a cat-and-mouse game with the Italian police, but manages to keep himself safe by restoring his own identity and moving to Venice
Venice
Venice is a city in northern Italy which is renowned for the beauty of its setting, its architecture and its artworks. It is the capital of the Veneto region...
. In succession Marge, Dickie's father, and an American private detective confront Ripley, who suggests to them that Dickie was depressed
Clinical depression
Major depressive disorder is a mental disorder characterized by an all-encompassing low mood accompanied by low self-esteem, and by loss of interest or pleasure in normally enjoyable activities...
and may have committed suicide
Suicide
Suicide is the act of intentionally causing one's own death. Suicide is often committed out of despair or attributed to some underlying mental disorder, such as depression, bipolar disorder, schizophrenia, alcoholism, or drug abuse...
. Marge stays for a while at Ripley's rented house in Venice; when she discovers Dickie's rings in Ripley's possession she seems to be on the verge of realising the truth. Panicked, Ripley contemplates murdering Marge, but she is saved when she says that if Dickie gave his rings to Ripley, then he probably meant to kill himself.

The story concludes with Ripley traveling to Greece
Greece
Greece , officially the Hellenic Republic , and historically Hellas or the Republic of Greece in English, is a country in southeastern Europe....
and resigning himself to eventually getting caught. On arrival in Greece, however, he discovers that the Greenleaf family has accepted that Dickie is dead and that Ripley shall inherit his fortune according to a will forged by Ripley on Dickie's Hermes typewriter. While the book ends with Ripley happily rich, it also suggests that he may forever be dogged by paranoia
Paranoia
Paranoia [] is a thought process believed to be heavily influenced by anxiety or fear, often to the point of irrationality and delusion. Paranoid thinking typically includes persecutory beliefs, or beliefs of conspiracy concerning a perceived threat towards oneself...
. In one of the final paragraphs, he nervously envisions a group of police officers waiting to arrest him, and Highsmith leaves her protagonist wondering, ".....was he going to see policemen waiting for him on every pier that he ever approached?"