The Rape of the Lock
Topic Home
Discussion
0

Encyclopedia
The Rape of the Lock is a mock-heroic
Mock-heroic
Mock-heroic, mock-epic or heroi-comic works are typically satires or parodies that mock common Classical stereotypes of heroes and heroic literature...
narrative poem written by Alexander Pope
Alexander Pope
Alexander Pope was an 18th-century English poet, best known for his satirical verse and for his translation of Homer. He is the third-most frequently quoted writer in The Oxford Dictionary of Quotations, after Shakespeare and Tennyson...
, first published anonymously in Lintot's Miscellany in May 1712 in two canto
Canto
The canto is a principal form of division in a long poem, especially the epic. The word comes from Italian, meaning "song" or singing. Famous examples of epic poetry which employ the canto division are Lord Byron's Don Juan, Valmiki's Ramayana , Dante's The Divine Comedy , and Ezra Pound's The...
s (334 lines), but then revised, expanded and reissued under Pope's name on March 2, 1714, in a much-expanded 5-canto version (794 lines). The final form was available in 1717 with the addition of Clarissa's speech on good humour.

The poem satirizes
Satire
Satire is primarily a literary genre or form, although in practice it can also be found in the graphic and performing arts. In satire, vices, follies, abuses, and shortcomings are held up to ridicule, ideally with the intent of shaming individuals, and society itself, into improvement...
a petty squabble by comparing it to the epic
Epic poetry
An epic is a lengthy narrative poem, ordinarily concerning a serious subject containing details of heroic deeds and events significant to a culture or nation. Oral poetry may qualify as an epic, and Albert Lord and Milman Parry have argued that classical epics were fundamentally an oral poetic form...
world of the gods. It was based on an incident recounted by Pope's friend, John Caryll
John Caryll the younger
John Caryll was the second Jacobite Baron Caryll of Durford.A friend of Alexander Pope, Caryll was the son of Richard Caryll , of West Grinstead, Sussex, and Frances , daughter of Sir Henry Bedingfield, and nephew and heir of John Caryll, Jacobite first Baron Caryll of Durford. He succeeded his...
. Arabella Fermor and her suitor, Lord Petre
Robert Petre, 7th Baron Petre
Robert Petre, 7th Baron Petre was a British peer, the son of Thomas Petre, 6th Baron Petre and his wife Mary Clifton, daughter of Sir Thomas Clifton. He succeeded to his title, at the age of 17, upon the death of his father....
, were both from aristocratic recusant Catholic families at a period in England when under such laws as the Test Act
Test Act
The Test Acts were a series of English penal laws that served as a religious test for public office and imposed various civil disabilities on Roman Catholics and Nonconformists...
, all denominations except Anglicanism
Anglicanism
Anglicanism is a tradition within Christianity comprising churches with historical connections to the Church of England or similar beliefs, worship and church structures. The word Anglican originates in ecclesia anglicana, a medieval Latin phrase dating to at least 1246 that means the English...
suffered legal restrictions and penalties (for example Petre could not take up his place in the House of Lords
House of Lords
The House of Lords is the upper house of the Parliament of the United Kingdom. Like the House of Commons, it meets in the Palace of Westminster....
as a Catholic). Petre, lusting after Arabella, had cut off a lock of her hair without permission, and the consequent argument had created a breach between the two families. Pope, also a Catholic, wrote the poem at the request of friends in an attempt to "comically merge the two." He utilized the character Belinda to represent Arabella and introduced an entire system of "sylphs
Sylph
Sylph is a mythological creature in the Western tradition. The term originates in Paracelsus, who describes sylphs as invisible beings of the air, his elementals of air...
," or guardian spirits of virgins, a parodized version of the gods and goddesses of conventional epic.

Pope’s poem mocks the traditions of classical epics: the abduction of Helen of Troy becomes here the theft of a lock of hair; the gods become minute sylphs; the description of Achilles
Achilles
In Greek mythology, Achilles was a Greek hero of the Trojan War, the central character and the greatest warrior of Homer's Iliad.Plato named Achilles the handsomest of the heroes assembled against Troy....
’ shield becomes an excursus on one of Belinda’s petticoats. He also uses the epic style of invocations, lamentations, exclamations and similes, and in some cases adds parody
Parody
A parody , in current usage, is an imitative work created to mock, comment on, or trivialise an original work, its subject, author, style, or some other target, by means of humorous, satiric or ironic imitation...
to imitation by following the framework of actual speeches in Homer’s Iliad
Iliad
The Iliad is an epic poem in dactylic hexameters, traditionally attributed to Homer. Set during the Trojan War, the ten-year siege of the city of Troy by a coalition of Greek states, it tells of the battles and events during the weeks of a quarrel between King Agamemnon and the warrior Achilles...
. Although the poem is humorous at times, Pope keeps a sense that beauty is fragile, and that the loss of a lock of hair touches Belinda deeply. As his introductory letter makes clear, women in that period were essentially supposed to be decorative rather than rational, and the loss of beauty was a serious matter. 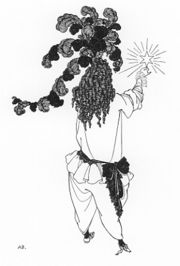 Three of Uranus's moons are named after characters from The Rape of the Lock: Belinda
Belinda (moon)
- External links :* by *...
, Umbriel
Umbriel (moon)
Umbriel is a moon of Uranus discovered on October 24, 1851, by William Lassell. It was discovered at the same time as Ariel and named after a character in Alexander Pope's poem The Rape of the Lock. Umbriel consists mainly of ice with a substantial fraction of rock, and may be differentiated into a...
, and Ariel
Ariel (moon)
Ariel is the brightest and fourth-largest of the 27 known moons of Uranus. Ariel orbits and rotates in the equatorial plane of Uranus, which is almost perpendicular to the orbit of Uranus, and so has an extreme seasonal cycle....
, the last name also (previously) appearing in Shakespeare
William Shakespeare
William Shakespeare was an English poet and playwright, widely regarded as the greatest writer in the English language and the world's pre-eminent dramatist. He is often called England's national poet and the "Bard of Avon"...
's The Tempest.

It is one of the most commonly cited examples of high burlesque.

Pope added to the second edition the following dedicatory letter: