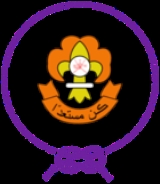 The National Organisation for Scouts and Guides
Topic Home
Discussion
0

Traditional Scouting program is adapted to meet national needs. Service projects include filling in swamps in villages and insect control
Mosquito control
Mosquito control manages the population of mosquitoes to reduce their damage to human health, economies, and enjoyment. Mosquito control is a vital public-health practice throughout the world and especially in the tropics because mosquitoes spread many diseases, such as malaria.Mosquito-control...
, planting trees and fighting fires. Scouts also help in guiding pilgrims
Hajj
The Hajj is the pilgrimage to Mecca, Saudi Arabia. It is one of the largest pilgrimages in the world, and is the fifth pillar of Islam, a religious duty that must be carried out at least once in their lifetime by every able-bodied Muslim who can afford to do so...
in Mecca
Mecca
Mecca is a city in the Hijaz and the capital of Makkah province in Saudi Arabia. The city is located inland from Jeddah in a narrow valley at a height of above sea level...
.

There are also various Rainbow, Brownie and Guide packs as well as a recently opened senior section.

The Scout Motto is "Kun Musta'idan" or كن مستعداً, translating as "Be Prepared" in Arabic. The noun for a single Scout is Kashaf or كشاف in Arabic. The membership badge of the National Organization for Scouts and Guides incorporates the coat of arms of Oman, and both the trefoil
Trefoil
Trefoil is a graphic form composed of the outline of three overlapping rings used in architecture and Christian symbolism...
representing the girls and the fleur-de-lis
Fleur-de-lis
The fleur-de-lis or fleur-de-lys is a stylized lily or iris that is used as a decorative design or symbol. It may be "at one and the same time, political, dynastic, artistic, emblematic, and symbolic", especially in heraldry...
representing the boys.

In 2009, Girl Guides at the Sri Lankan School in Muscat had their camp in October canceled to prevent the spread of Swine 'flu. The Guides paper recycling
Paper recycling
Paper recycling is the process of recovering waste paper and remaking it into new paper products. There are three categories of paper that can be used as feedstocks for making recycled paper: mill broke, pre-consumer waste, and post-consumer waste. Mill broke is paper trimmings and other paper...
project was also discontinued for the same reason.

The high number of Indian schools in the Sultanate have their own scouts and guides program affiliated to The Bharat Scouts and Guides
The Bharat Scouts and Guides
The Bharat Scouts and Guides is the national Scouting and Guiding association of India.Scouting was founded in India in 1909 as an overseas branch of the Scout Association and became a member of the World Organization of the Scout Movement in 1938...
, India
India
India , officially the Republic of India , is a country in South Asia. It is the seventh-largest country by geographical area, the second-most populous country with over 1.2 billion people, and the most populous democracy in the world...
. Camps are organised yearly by the schools (usually sending members and faculty to other schools for a 3 day and 2 nights camp). Scouting and Guiding is compulsory for all school children at Indian Schools and lasts for no more than 3 years (usually class 6 through 8).