Encyclopedia
The Mail on Sunday is a British conservative newspaper, currently published in a tabloid format. First published in 1982 by Lord Rothermere
Vere Harmsworth, 3rd Viscount Rothermere
Vere Harold Esmond Harmsworth, 3rd Viscount Rothermere became the 3rd Viscount Rothermere in 1978, having been widely known as Vere Harmsworth. He controlled large media interests in the United Kingdom and United States...
, it became Britain's biggest-selling Sunday newspaper following the closing of The News of the World in July 2011. Its sister paper, the Daily Mail
Daily Mail
The Daily Mail is a British daily middle-market tabloid newspaper owned by the Daily Mail and General Trust. First published in 1896 by Lord Northcliffe, it is the United Kingdom's second biggest-selling daily newspaper after The Sun. Its sister paper The Mail on Sunday was launched in 1982...
was launched in 1896.

It is owned by Associated Newspapers
Associated Newspapers
Associated Newspapers is a large national newspaper publisher in the UK, which is a subsidiary of the Daily Mail and General Trust. The group was established in 1905 and is currently based at Northcliffe House in Kensington...
, but the editorial staff are entirely separate from the Daily Mail. It had an average daily circulation of 1,979,701 in September 2011. In July, 2011, with the closure of the News of the World the Mail on Sunday sold some 2.5 million copies a week but by September that had fallen back to just under 2 million.

The Mail on Sunday was launched on 2 May 1982, to complement the Daily Mail.
The first story on the front page was the RAF's bombing of Port Stanley airport in the Falklands. The Daily Mail and General Trust (DMGT) had come up with some tough targets for the paper to produce. Initially DMGT wanted to sell a target of a circulation
Newspaper circulation
A newspaper's circulation is the number of copies it distributes on an average day. Circulation is one of the principal factors used to set advertising rates. Circulation is not always the same as copies sold, often called paid circulation, since some newspapers are distributed without cost to the...
of 1.25 million. But the launch of The Mail on Sunday was not a success, as by the sixth week sales were just peaking at 700,000.
The newspaper's sports coverage was seen to be among its weaknesses at the time of its launch. The Mail on Sundays first back-page splash was a report from Holland on the rollerskating world championships, which led to the paper being ridiculed in the industry.

Lord Rothermere
Vere Harmsworth, 3rd Viscount Rothermere
Vere Harold Esmond Harmsworth, 3rd Viscount Rothermere became the 3rd Viscount Rothermere in 1978, having been widely known as Vere Harmsworth. He controlled large media interests in the United Kingdom and United States...
, then the proprietor, brought in the Daily Mails editor David English
David English
David English may refer to:*Melvin Franklin , American bass singer*Sir David English , , British newspaper editor...
, later Sir David who, with a task force of new journalists, redesigned and re-launched The Mail on Sunday. Over a period of three and a half months, Sir David managed to halt the decline and circulation increased to 840,000. There were three new sections introduced, first was a sponsored partwork
Partwork
A partwork is a written publication released as a series of planned magazine-like issues over a period of time. Issues are typically released on a weekly, fortnightly or monthly basis, and often a completed set is designed to form a reference work on a particular topic.-Publication:Partwork series...
the initial one to be a cookery book; then a colour comic supplement (an innovation in the British Sunday newspaper market); and lastly, a magazine – You magazine. Circulation for the paper is now around 2.3 million, an increase of more than 1.5 million.

The newspaper's reputation was built on the back of its next editor, Stewart Steven. The newspaper's circulation grew from around 1m to just under 2m during his time in charge. Although its sister paper the Daily Mail has invariably supported the Conservative party, Steven backed David Owen
David Owen
David Anthony Llewellyn Owen, Baron Owen CH PC FRCP is a British politician.Owen served as British Foreign Secretary from 1977 to 1979, the youngest person in over forty years to hold the post; he co-authored the failed Vance-Owen and Owen-Stoltenberg peace plans offered during the Bosnian War...
's Social Democratic Party
Social Democratic Party (UK)
The Social Democratic Party was a political party in the United Kingdom that was created on 26 March 1981 and existed until 1988. It was founded by four senior Labour Party 'moderates', dubbed the 'Gang of Four': Roy Jenkins, David Owen, Bill Rodgers and Shirley Williams...
in the 1983 General Election.
The subsequent editors were Jonathan Holborow, and the incumbent, Peter Wright. 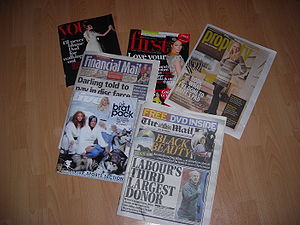 1982: Bernard Shrimsley
Bernard Shrimsley
Bernard Shrimsley is a British newspaper editor and writer. He was editor of The Sun and the News of the World . He launched the Mail on Sunday in 1980 and acted as a director of the paper from 1980 to 1982...
1982: David English
David English (journalist)
Sir David English was a British journalist and newspaper editor, best known for his twenty-year editorship of the Daily Mail.-Early life:...
1982: Stewart Steven
Stewart Steven
Stewart Steven was a British newspaper editor who grew circulation. His career was marked by three major clunkers. He was personally generous to friends and family....
1992: Jonathan Holborow
1998: Peter Wright
Peter Wright (journalist)
Peter Wright is a British newspaper editor.Wright attended Clare College, Cambridge, then took a graduate trainee position with Thomson Regional Newspapers, working as a reporter on the Hemel Hempstead Evening Post-Echo. In 1979, he moved to the Daily Mail, working on various desks before...