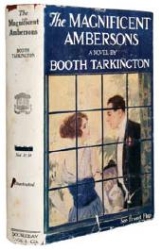 
The Magnificent Ambersons is a 1918 novel by Booth Tarkington
Booth Tarkington
Booth Tarkington was an American novelist and dramatist best known for his Pulitzer Prize-winning novels The Magnificent Ambersons and Alice Adams...
which won the 1919 Pulitzer Prize
1919 Pulitzer Prize
-Journalism awards:*Public Service:**Milwaukee Journal, for its strong and courageous campaign for Americanism in a constituency where foreign elements made such a policy hazardous from a business point of view.-Letters and Drama Awards:*Novel:...
for novel. It was the second novel in his Growth trilogy, which included The Turmoil (1915) and The Midlander (1923, retitled National Avenue in 1927). In 1925 the novel was first adapted for film under the title Pampered Youth. In 1942
1942 in film
The year 1942 in film involved some significant events, in particular the release of a film consistently rated as one of the greatest of all time, Casablanca.-Events:...
Orson Welles
Orson Welles
George Orson Welles , best known as Orson Welles, was an American film director, actor, theatre director, screenwriter, and producer, who worked extensively in film, theatre, television and radio...
directed an acclaimed film version
The Magnificent Ambersons (film)
The Magnificent Ambersons is a 1942 American drama film written and directed by Orson Welles. His second feature film, it is based on the 1918 novel of the same name by Booth Tarkington and stars Joseph Cotten, Dolores Costello, Anne Baxter, Tim Holt, Agnes Moorehead and Ray Collins...
of the book; Welles's original screenplay was the basis of 2002 TV movie produced by the A&E Network
A&E Network
The A&E Network is a United States-based cable and satellite television network with headquarters in New York City and offices in Atlanta, Chicago, Detroit, London, Los Angeles and Stamford. A&E also airs in Canada and Latin America. Initially named the Arts & Entertainment Network, A&E launched...
.

The novel and trilogy trace the growth of the United States
United States
The United States of America is a federal constitutional republic comprising fifty states and a federal district...
through the declining fortunes of three generations of the aristocratic Amberson family in an upper-scale Indianapolis neighborhood, between the end of the Civil War
American Civil War
The American Civil War was a civil war fought in the United States of America. In response to the election of Abraham Lincoln as President of the United States, 11 southern slave states declared their secession from the United States and formed the Confederate States of America ; the other 25...
and the early part of the 20th century, a period of rapid industrialization and socio-economic change in America. The decline of the Ambersons is contrasted with the rising fortunes of industrial tycoons and other new-money families, which did not derive power from family names but by "doing things." As George Amberson's friend (name unspecified) says, "don't you think being things is 'rahthuh bettuh' than doing things?"

The titular family are the most prosperous and powerful in town at the turn of the century. Young George Amberson Minafer, the patriarch’s grandson, is spoiled terribly by his mother Isabel. Growing up arrogant, sure of his own worth and position and totally oblivious to the lives of others, George falls in love with Lucy Morgan, a young though sensible debutante. But there is a long history between George’s mother and Lucy’s father, of which George is unaware. As the town grows into a city, industry thrives, the Ambersons’ prestige and wealth wanes and the Morgans – thanks to Lucy’s prescient father – grow prosperous. When George sabotages his widowed mother's growing affections for Lucy's father, life as he knows it comes to an end.

"The Magnificent Ambersons is perhaps Tarkington's best novel," said Van Wyck Brooks
Van Wyck Brooks
Van Wyck Brooks was an American literary critic, biographer, and historian.- Biography :Brooks was educated at Harvard University and graduated in 1908...
. "[It is] a typical story of an American family and town—the great family that locally ruled the roost and vanished virtually in a day as the town spread and darkened into a city. This novel no doubt was a permanent page in the social history of the United States, so admirably conceived and written was the tale of the Ambersons, their house, their fate and the growth of the community in which they were submerged in the end."

The Magnificent Ambersons has been adapted into film three times: In 1925 under the title Pampered Youth, an award-winning 1942 film directed by Orson Welles, and a 2002 made for television film.