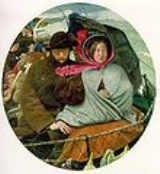 Encyclopedia
The Last of England is an 1855 oil-on-panel painting by Ford Madox Brown
Ford Madox Brown
Ford Madox Brown was an English painter of moral and historical subjects, notable for his distinctively graphic and often Hogarthian version of the Pre-Raphaelite style. Arguably, his most notable painting was Work...
depicting two emigrants leaving England
England
England is a country that is part of the United Kingdom. It shares land borders with Scotland to the north and Wales to the west; the Irish Sea is to the north west, the Celtic Sea to the south west, with the North Sea to the east and the English Channel to the south separating it from continental...
to start a new life abroad.

Brown began the painting in 1852 inspired by the departure of his close friend, the Pre-Raphaelite sculptor, Thomas Woolner
Thomas Woolner
Thomas Woolner RA was an English sculptor and poet who was one of the founder-members of the Pre-Raphaelite Brotherhood. He was the only sculptor among the original members....
, who had left for Australia in July of that year. Emigration from England was at a peak, with over 350,000 people leaving that year. Brown, who at the time considered himself "very hard up and a little mad", was himself thinking of moving to India
India
India , officially the Republic of India , is a country in South Asia. It is the seventh-largest country by geographical area, the second-most populous country with over 1.2 billion people, and the most populous democracy in the world...
with his new family.

Although Ford Madox Brown was never a member of the Pre-Raphaelite Brotherhood, The Last of England, like many of his paintings, exhibits all the characteristics of the movement.
The painting depicts a man and his wife leaving England for the last time. The two main figures, based on Brown and his wife, Emma, stare ahead, stony-faced, ignoring the white cliffs of Dover
White cliffs of Dover
The White Cliffs of Dover are cliffs which form part of the British coastline facing the Strait of Dover and France. The cliffs are part of the North Downs formation. The cliff face, which reaches up to , owes its striking façade to its composition of chalk accentuated by streaks of black flint...
which can be seen disappearing behind in the top right of the picture. The clothing indicates that family are middle class, so are not leaving for the reasons that would force the emigration of the working class
Working class
Working class is a term used in the social sciences and in ordinary conversation to describe those employed in lower tier jobs , often extending to those in unemployment or otherwise possessing below-average incomes...
es; Brown's writing touched on the same theme:
The fair-haired child in the background behind the man's shoulder is Brown and Emma's child, Catherine, who was born in 1850. The hand of the baby, which can be seen clasped by the woman, is supposedly that of their second child, Oliver.

In order to mirror the harsh conditions in the painting Brown worked mostly outside in his garden, and was happy when the weather was poor — he recorded his feelings of delight when the cold turned his hand blue, as this was how he wanted it to appear in the painting. He was seen as strange by his neighbours who saw him out in all kinds of weather. He composed a short verse to accompany the painting in which the woman is depicted as hopeful for the future:
Brown's painting room was above a china shop at 33 High Street, Hampstead
Hampstead
Hampstead is an area of London, England, north-west of Charing Cross. Part of the London Borough of Camden in Inner London, it is known for its intellectual, liberal, artistic, musical and literary associations and for Hampstead Heath, a large, hilly expanse of parkland...
and sittings took place in the garden thereof. His diary noted that the '...ribbons of the bonnet took me 4 weeks to paint'.


Provenance
Provenance
Provenance, from the French provenir, "to come from", refers to the chronology of the ownership or location of an historical object. The term was originally mostly used for works of art, but is now used in similar senses in a wide range of fields, including science and computing... 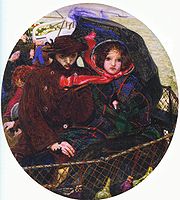 Two finished versions of the picture exist, one in the Birmingham Museum and Art Gallery and the other in the Fitzwilliam Museum
Fitzwilliam Museum
The Fitzwilliam Museum is the art and antiquities museum of the University of Cambridge, located on Trumpington Street opposite Fitzwilliam Street in central Cambridge, England. It receives around 300,000 visitors annually. Admission is free....
in Cambridge
Cambridge
The city of Cambridge is a university town and the administrative centre of the county of Cambridgeshire, England. It lies in East Anglia about north of London. Cambridge is at the heart of the high-technology centre known as Silicon Fen – a play on Silicon Valley and the fens surrounding the...
. A watercolour replica of the painting in Birmingham produced between 1864–6 is held by the Tate Britain
Tate Britain
Tate Britain is an art gallery situated on Millbank in London, and part of the Tate gallery network in Britain, with Tate Modern, Tate Liverpool and Tate St Ives. It is the oldest gallery in the network, opening in 1897. It houses a substantial collection of the works of J. M. W. Turner.-History:It...
. A fully worked study also exists, and a detailed compositional drawing. All are in the form of round panels, a rarely revived Renaissance format called a tondo
Tondo (art)
A tondo is a Renaissance term for a circular work of art, either a painting or a sculpture. The word derives from the Italian rotondo, "round." The term is usually not used in English for small round paintings, but only those over about 60 cm in diameter, thus excluding many round portrait...
, but differ in colouring.

In March 1859 "The Last Sight of England" as it was then known, was sold by Benjamin Windus to Ernest Gambart
Ernest Gambart
Jean Joseph Ernest Theodore Gambart was a Belgian-born English art publisher and dealer who dominated the London art world in the middle of the nineteenth century.-Life and career:...
for 325 Guineas
Guinea (British coin)
The guinea is a coin that was minted in the Kingdom of England and later in the Kingdom of Great Britain and the United Kingdom between 1663 and 1813...
(2010: £).

The picture was voted Britain's eighth-favourite picture in a poll carried out by BBC Radio 4
BBC Radio 4
BBC Radio 4 is a British domestic radio station, operated and owned by the BBC, that broadcasts a wide variety of spoken-word programmes, including news, drama, comedy, science and history. It replaced the BBC Home Service in 1967. The station controller is currently Gwyneth Williams, and the...
.