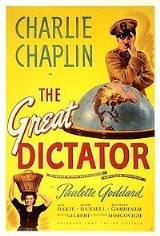 Overview
The Great Dictator is a comedy film
Comedy film
Comedy film is a genre of film in which the main emphasis is on humour. They are designed to elicit laughter from the audience. Comedies are mostly light-hearted dramas and are made to amuse and entertain the audiences...
by Charlie Chaplin
Charlie Chaplin
Sir Charles Spencer "Charlie" Chaplin, KBE was an English comic actor, film director and composer best known for his work during the silent film era. He became the most famous film star in the world before the end of World War I...
released in October 1940. Like most Chaplin films, he wrote, produced, and directed, in addition to starring as the lead. Having been the only Hollywood film maker to continue to make silent films well into the period of sound films, this was Chaplin's first true talking picture  as well as his most commercially successful film. More importantly, it was the first major feature film of its period to bitterly satirize Nazism
Nazism
Nazism, the common short form name of National Socialism was the ideology and practice of the Nazi Party and of Nazi Germany...
and Adolf Hitler
Adolf Hitler
Adolf Hitler was an Austrian-born German politician and the leader of the National Socialist German Workers Party , commonly referred to as the Nazi Party). He was Chancellor of Germany from 1933 to 1945, and head of state from 1934 to 1945...
.

How do you qualify hynkel as a president? do you like him?

Why do charlie chaplin starts the film in the trenches of WWI?
More
x