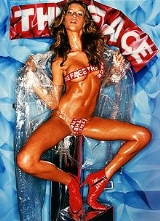 Encyclopedia
The Face was a British music, fashion and culture monthly magazine started in May 1980 by Nick Logan
Nick Logan
Nick Logan is an English journalist and magazine editor born in Lincoln in 1947.-Biography:Logan started his journalistic career in the 1960s writing reviews and articles for the NME...
.

Logan had previously created the teen pop magazine Smash Hits
Smash Hits
Smash Hits was a pop music based magazine, aimed at teenagers and young adults and originally published in the United Kingdom by EMAP. It ran from 1978 to 2006 and was issued fortnightly for most of that time...
, and had been an editor at the New Musical Express in the 1970s before launching The Face in 1980.

The magazine was influential in showcasing a number of fashion, music, and style trends of youth culture including New Romantic
New Romantic
New Romanticism , was a pop culture movement in the United Kingdom that began around 1979 and peaked around 1981. Developing in London nightclubs such as Billy's and The Blitz and spreading to other major cities in the UK, it was based around flamboyant, eccentric fashion and new wave music...
, and the "Hard Times" look of the mid-1980s.

In 1992, the magazine ran an article which contained a reference to the supposed sexual orientation of the Australian actor and pop star Jason Donovan
Jason Donovan
Jason Donovan is an Australian actor and singer. He initially achieved fame in the Australian soap opera Neighbours, before beginning a career in music in 1988. In the UK he has sold over 3 million records, and his début album Ten Good Reasons was one of the highest-selling albums of 1989...
. Donovan sued the magazine for libel in 1992 and won the case. Subsequently, the magazine requested donations from readers to pay the substantial libel damages and court costs which came to £300,000. 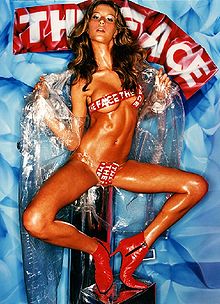 The magazine set up the "Lemon Aid" fund—supposedly so-called because the original article on Donovan had stated that he treated his hair with lemon juice in order to make it blonder. Donovan reached a settlement with the magazine to allow it to stay in business.

Its best selling period was in the mid-1990s, when editor Richard Benson brought in a team that included art director Lee Swillingham. Benson ensured the magazine's written content reflected developments in music, art and fashion whilst Swillingham changed the visual direction of the magazine to showcase new photography, commissioning work by Stéphane Sednaoui
Stéphane Sednaoui
Stéphane Sednaoui is a French-American photographer, director and producer whose work includes music videos, art projects, photographic essays, portrait photography, fashion photography and photojournalism....
, Inez Van Lamsweerde, Steven Klein
Steven Klein
Steven Klein is an American photographer based in New York.-History:After studying painting at the Rhode Island School of Design, he moved into the field of photography...
, David LaChapelle
David LaChapelle
David LaChapelle is a photographer and director who works in the fields of fashion, advertising, and fine art photography, and is noted for his surreal, unique, sexualized, and often humorous style.-Early life:...
, Norbert Schoerner
Norbert Schoerner
Norbert Schoerner is a German photographer and filmmaker.Based in London since 1989, he spent the early 1990s experimenting withlayered imaging and digital post production, primarily in The Face. His work has since been published in NY Times magazine,Vogue, and Another Magazine...
, Glen Luchford
Glen Luchford
Glen Luchford is a British fashion photographer and film director.Luchford first signed with the New York Agency, Art and Commerce, at the age of 24. In 1997, he signed exclusively to Prada, and has since shot advertising campaigns for Yves Saint Laurent, Levi's, Mercedes-Benz and Calvin Klein...
, Henry Bond
Henry Bond
Henry Bond is an English writer, photographer curator, and visual artist. In his Lacan at the Scene , Bond made a contribution to theoretical psychoanalysis....
, Craig McDean
Craig McDean
Craig McDean is a British fashion photographer originally from Middlewich near Manchester, but now based in New York City....
and Elaine Constantine
Elaine Constantine
·Elaine Constantine , is a photographer and filmmaker known for her colourful and upbeat imagery of British youth culture.-Photography:...
.

In 1999, Wagadon was sold the title to the publishing company EMAP
EMAP
Emap Limited is a British media company, specialising in the production of business-to-business magazines, and the organisation of business events and conferences...
.

Notable names associated with the magazine were designer & typographer Neville Brody
Neville Brody
Neville Brody is an English graphic designer, typographer and art director.Neville Brody is an alumnus of the London College of Printing and Hornsey College of Art, and is known for his work on The Face magazine and Arena magazine , as well as for designing record covers for artists such as...
(Art Director, 1981–86), creative director Lee Swillingham (Art Director 1993-1999), Craig Tilford and Graham Rounthwaite (Art Direction 1999-2003), Julie Burchill
Julie Burchill
Julie Burchill is an English writer and journalist. Beginning as a writer for the New Musical Express at the age of 17, she has written for newspapers such as The Sunday Times and The Guardian. She is a self-declared "militant feminist". She has several times been involved in legal action...
, Tony Parsons
Tony Parsons (British journalist)
Tony Parsons is a British journalist broadcaster and author. He began his career as a music journalist on the NME, writing about punk music. Later, he wrote for The Daily Telegraph, before going on to write his current column for the Daily Mirror...
, photographers Juergen Teller
Juergen Teller
Juergen Teller is an artist and fashion photographer.-Life and career:Teller studied at the Bayerische Staatslehranstalt für Photographie in Munich, Germany...
, David Sims
David Sims
David Sims is a former professional American football player who played running back for three seasons for the Seattle Seahawks. He led the National Football League in touchdowns in 1978 with 15, but suffered a career-ended injury early the next season...
and writers including Jon Savage
Jon Savage
Jon Savage , real name Jonathon Sage, is a Cambridge-educated writer, broadcaster and music journalist, best known for his award winning history of the Sex Pistols and punk music, England's Dreaming, published in 1991.-Career:...
and Fiona Russell Powell.

By its May 2004 closure monthly sales had declined and advertising revenues had consequently reduced. The publishers EMAP soon closed the title in order to concentrate resources on its more successful magazines. In an ironic twist, Jason Donovan led a consortium that made an abortive approach to EMAP to save the title prior to its closure.