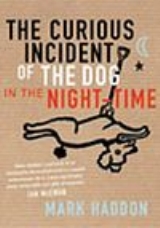 Overview
The Curious Incident of the Dog in the Night-Time is a 2003 novel by British writer Mark Haddon
Mark Haddon
Mark Haddon is an English novelist and poet, best known for his 2003 novel The Curious Incident of the Dog in the Night-Time.- Life and work :...
. It won the 2003 Whitbread Book of the Year and the 2004 Commonwealth Writers' Prize
Commonwealth Writers' Prize
Commonwealth Writers is an initiative by the Commonwealth Foundation to unearth, develop and promote the best new fiction from across the Commonwealth. It's flagship are two literary awards and a website...
for Best First Book. Its title is a quotation of a remark made by the fictional detective Sherlock Holmes
Sherlock Holmes
Sherlock Holmes is a fictional detective created by Scottish author and physician Sir Arthur Conan Doyle. The fantastic London-based "consulting detective", Holmes is famous for his astute logical reasoning, his ability to take almost any disguise, and his use of forensic science skills to solve...
in Arthur Conan Doyle
Arthur Conan Doyle
Sir Arthur Ignatius Conan Doyle DL was a Scottish physician and writer, most noted for his stories about the detective Sherlock Holmes, generally considered a milestone in the field of crime fiction, and for the adventures of Professor Challenger...
's 1892 short story "Silver Blaze
Silver Blaze
"Silver Blaze", one of the 56 Sherlock Holmes short stories written by British author Sir Arthur Conan Doyle, is one of 12 in the cycle collected as The Memoirs of Sherlock Holmes. It was adapted in 1937 to a film starring Arthur Wontner, and an ITV drama starring Christopher Plummer which was...
".

The story is written in the first-person perspective
First-person narrative
First-person point of view is a narrative mode where a story is narrated by one character at a time, speaking for and about themselves. First-person narrative may be singular, plural or multiple as well as being an authoritative, reliable or deceptive "voice" and represents point of view in the...
of Christopher John Francis Boone, a 15-year-old boy who describes himself as ‘a mathematician with some behavioral difficulties’ living in Swindon
Swindon
Swindon is a large town within the borough of Swindon and ceremonial county of Wiltshire, in South West England. It is midway between Bristol, west and Reading, east. London is east...
, Wiltshire.

When christophers dad tells him he killed the dog, how can we compare his behavior to an animal?