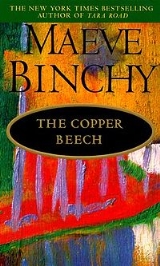 Encyclopedia
The Copper Beech is a 1992
1992 in literature
The year 1992 in literature involved some significant events and new books.-New books:*Ben Aaronovitch - Transit*Julia Álvarez - How the García Girls Lost Their Accents*Paul Auster - Leviathan*Iain Banks - The Crow Road...
novel
Novel
A novel is a book of long narrative in literary prose. The genre has historical roots both in the fields of the medieval and early modern romance and in the tradition of the novella. The latter supplied the present generic term in the late 18th century....
by Irish author Maeve Binchy
Maeve Binchy
Maeve Binchy is an Irish novelist, newspaper columnist and speaker. Educated at University College Dublin, she worked as a teacher then a journalist at The Irish Times and later became a writer of novels and short stories.Many of her novels are set in Ireland, dealing with the tensions between...
.

The novel is centered around the lives of eight people, each of which have etched their dreams or desires into a large beech
Beech
Beech is a genus of ten species of deciduous trees in the family Fagaceae, native to temperate Europe, Asia and North America.-Habit:...
tree on the last day of school. The novel follows the progression of their lives and whether they accomplished their dreams.

Maura Brennan has no choice but to work after her schooling. She has a drunken father and so is happy to work as a live-in chamber maid in Ryan's hotel. Nessa'a mother prefers that her daughter does not speak with Maura even though they went to the same school. Maura falls in love with the barman Gerry O'Sullivan and falls for a child. They are married and child has Down Syndrome and so the man leaves with Maura to face it alone. She then works for the Darcy's who opened a new shop in the village. She unfolds the mystery of her Gloria's missing jewels and ends up owning them

Leo Kelly is the last child in her family. Her grown up brother's have left home. She lives with her injured soldier father and mother. Her teenage life is caught in the tangle her mother has made and thinks she can never be normal again. She finds love which helps her break down the walls she made for herself.

Foxy Dunne from the slums never gives up. He works his way up in life and becomes a builder. He helps Leo forget her miseries and leave them behind.

Eddie Barton lives with his seamstress mother. He writes to his pen friend in Scotland. Eventually it turns into love. Both of them are worried about their appearances and don't know if they will be accepted by the other. This girl with a funny accent comes down to Shancarrig and gives a new lease of life for Eddie and Una Barton.

Vanessa Ryan thinks her mother is bossy. Its all about how she grows up to be a person of strong character and chooses the right man for her life.

Niall Hayes doesn't know to get what he wants in life. His cousin Richard is grown up and all over the place , takes everything Niall desires, a place in his father's firm and de girl he loves. How he gets all this is the crux of his story.

The others are Maddy Ross and her love story, The Darcy's, Dr. Blake and his son Declan.
The school goes on sale. Who buys it and for what?? That's the ending of the story