Established in 1926, Long Island University's mission is "to open the doors of the city and the world to men and women of all ethnic and socioeconomic backgrounds, who wish to achieve the satisfaction of the educated life and to serve the public good and to awaken, enlighten and expand the minds of its students." The campus is recognized by the New York Times as being one of the most diverse in the U.S. 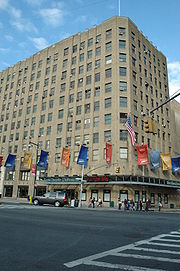 The Brooklyn Campus is located at the intersection of Flatbush and DeKalb avenues (across the street from Junior's
Junior's
Junior's is a restaurant at the corner of Flatbush Avenue Extension and DeKalb Avenue in the New York City borough of Brooklyn . The restaurant also has an outlet inside Grand Central Terminal in Midtown Manhattan, one in the Times Square area, and one in the hotel lobby of MGM Grand at Foxwoods in...
restaurant). The campus is served by several New York City Subway
New York City Subway
The New York City Subway is a rapid transit system owned by the City of New York and leased to the New York City Transit Authority, a subsidiary agency of the Metropolitan Transportation Authority and also known as MTA New York City Transit...
lines as well as the Long Island Rail Road
Long Island Rail Road
The Long Island Rail Road or LIRR is a commuter rail system serving the length of Long Island, New York. It is the busiest commuter railroad in North America, serving about 81.5 million passengers each year. Established in 1834 and having operated continuously since then, it is the oldest US...
(the Atlantic Terminal is located three blocks from campus).

The first class at the Campus’ original site, located at 300 Pearl Street, had 312 students from the surrounding neighborhoods. The majority of students were immigrants or the children of immigrants, many of which were the first in their families to ever attend college or school in general.

In 1929, the University affiliated itself with the Brooklyn College of Pharmacy. The momentum behind the university's growth slowed drastically due to the Great Depression in the United States
Great Depression in the United States
The Great Depression began with the Wall Street Crash of October, 1929 and rapidly spread worldwide. The market crash marked the beginning of a decade of high unemployment, poverty, low profits, deflation, plunging farm incomes, and lost opportunities for economic growth and personal advancement...
. During World War II
World War II
World War II, or the Second World War , was a global conflict lasting from 1939 to 1945, involving most of the world's nations—including all of the great powers—eventually forming two opposing military alliances: the Allies and the Axis...
, the university filed for bankruptcy protection due to enrollment decreases caused by the draft. The G.I. Bill of Rights
G.I. Bill of Rights
The Servicemen's Readjustment Act of 1944 , known informally as the G.I. Bill, was an omnibus law that provided college or vocational education for returning World War II veterans as well as one year of unemployment compensation...
increased enrollment exponentially following the end of the war.

Starting in 1964, William Birenbaum
William Birenbaum
William Marvin Birenbaum was an American educator and college administrator who served in leadership positions at the New School for Social Research, Long Island University, Staten Island Community College, and received national attention for his efforts to address financial difficulties during...
was named as the vice president and provost
Provost (education)
A provost is the senior academic administrator at many institutions of higher education in the United States, Canada and Australia, the equivalent of a pro-vice-chancellor at some institutions in the United Kingdom and Ireland....
at the Brooklyn campus. In that role he supported keeping lower tuition and approved changes that eliminated a dress code and allowed students to have a beard. He was opposed in these efforts by the traditionalist chancellor R. Gordon Hoxie
R. Gordon Hoxie
Ralph Gordon Hoxie was an American educator and college administrator who served as chancellor of Long Island University in the 1960s and founded the Library of Presidential Papers , after he resigned from LIU.Hoxie was born in Waterloo, Iowa and earned his undergraduate degree in 1940...
who had sought to raise tuition as a means of dealing with the college's mounting debt burden. Hoxie demanded Birenbaum's resignation in March 1967, despite the fact that the faculty had voted by a nearly 4–1 margin to keep him as provost. 1,500 students gathered to mount what turned out to be an unsuccessful protest against Birenbaum's dismissal, chanting "We want Bill" and physically confronting Dr. Hoxie.

In the late 1960s, plans were proposed by several trustees to sell the Brooklyn Campus in order to finance a new graduate campus on Long Island. Students and faculty held demonstrations protesting those plans. In 1972, administrators and faculty members negotiated the first collectively bargained faculty agreement at a private university in the United States.

The Brooklyn Campus of Long Island University is the only unit of the LIU system to compete in Division I athletics and has 18 varsity teams. The school mascot is the Blackbirds.

The men's basketball team won the National Invitation Tournament
National Invitation Tournament
The National Invitation Tournament is a men's college basketball tournament operated by the National Collegiate Athletic Association. There are two NIT events each season. The first, played in November and known as the Dick's Sporting Goods NIT Season Tip-Off , was founded in 1985...
(NIT) in 1939 and 1941 under the guidance of coach Clair Bee
Clair Bee
Clair Francis Bee was an American basketball coach, who led the team at Long Island University in Brooklyn, New York to undefeated seasons in 1936 and 1939, as well as two National Invitation Tournament titles...
. However, in 1951, the Blackbirds basketball players were involved in the CCNY Point Shaving Scandal
CCNY Point Shaving Scandal
The CCNY point shaving scandal of 1950-1951 was a college basketball point shaving gambling scandal that involved seven schools in all, with four in Greater New York and three in the Midwest...
that resulted in five players receiving a suspended sentence and one player a one-year prison sentence. The basketball team was suspended for six years from 1951-1957. Games were played at the Brooklyn Paramount Theater
Brooklyn Paramount Theater
The Paramount Theatre is a former movie palace located at 1 University Plaza at the intersection of Flatbush and DeKalb Avenues in downtown Brooklyn, New York. Originally opened in 1928, the building has been owned by Long Island University since 1962...
until recently. http://www.nydailynews.com/sports/college/2009/01/06/2009-01-06_blackbirds_fly_back_to_liu_for_alumni_ba.html

The former Brooklyn Paramount Theater
Brooklyn Paramount Theater
The Paramount Theatre is a former movie palace located at 1 University Plaza at the intersection of Flatbush and DeKalb Avenues in downtown Brooklyn, New York. Originally opened in 1928, the building has been owned by Long Island University since 1962...
, was the world’s first theater built specifically for talking pictures. The theater, which abuts the original core campus, was bought in 1960 by LIU and converted into a gymnasium in 1963. Parts of the theater's balcony were used as lecture rooms. The theater's original Wurlitzer organ was used as a basketball court for the Brooklyn campus' Blackbirds' home basketball games until the Wellness, Recreation and Athletic Center (designed by Arquitectonica
Arquitectonica
Arquitectonica is an international architecture, landscape architecture, interior design and urban planning corporation headquartered in Miami, Florida, United States in the Coconut Grove neighborhood, with offices in ten other cities throughout the world...
) was built.