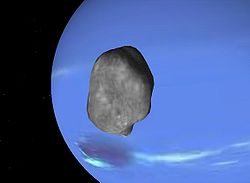 Thalassa also known as Neptune IV, is the second innermost satellite
Inner satellite
In astronomy, an inner moon is a natural satellite following a prograde, low inclination orbit inwards of the large satellites of the parent planet. They are generally thought to have been formed in situ at the same time as the coalescence of the original planet...
of Neptune
Neptune
Neptune is the eighth and farthest planet from the Sun in the Solar System. Named for the Roman god of the sea, it is the fourth-largest planet by diameter and the third largest by mass. Neptune is 17 times the mass of Earth and is slightly more massive than its near-twin Uranus, which is 15 times...
. Thalassa was named after sea goddesss Thalassa
Thalassa (mythology)
In Greek mythology, Thalassa is a primordial sea goddess, daughter of Aether and Hemera. With sea god Pontus, she was the mother of the nine Telchines and Halia. Sometimes, she was thought of as the mother of Aphrodite with Uranus or with Zeus. She is the personification of the Mediterranean Sea....
, a daughter of Aether
Aether
-Metaphysics and mythology:* Aether , the material that fills the region of the universe above the terrestrial sphere* Aether was the personification of the "upper sky", space and heaven, in Greek mythology-Science and engineering:...
and Hemera
Hemera
In Greek mythology Hemera was the personification of day and one of the Protogenoi or primordial deities. She is the goddess of the daytime and, according to Hesiod, the daughter of Erebos and Nyx...
from Greek mythology
Greek mythology
Greek mythology is the body of myths and legends belonging to the ancient Greeks, concerning their gods and heroes, the nature of the world, and the origins and significance of their own cult and ritual practices. They were a part of religion in ancient Greece...
. "Thalassa" is also the Greek
Greek language
Greek is an independent branch of the Indo-European family of languages. Native to the southern Balkans, it has the longest documented history of any Indo-European language, spanning 34 centuries of written records. Its writing system has been the Greek alphabet for the majority of its history;...
word for "sea
Sea
A sea generally refers to a large body of salt water, but the term is used in other contexts as well. Most commonly, it means a large expanse of saline water connected with an ocean, and is commonly used as a synonym for ocean...
".
Thalassa was discovered sometime before mid-September 1989 from the images taken by the Voyager 2
Voyager 2
The Voyager 2 spacecraft is a 722-kilogram space probe launched by NASA on August 20, 1977 to study the outer Solar System and eventually interstellar space...
probe
Space probe
A robotic spacecraft is a spacecraft with no humans on board, that is usually under telerobotic control. A robotic spacecraft designed to make scientific research measurements is often called a space probe. Many space missions are more suited to telerobotic rather than crewed operation, due to...
. It was given the temporary designation S/1989 N 5. The discovery was announced (IAUC 4867) on September 29, 1989, but the text only talks of "25 frames taken over 11 days", giving a discovery date of sometime before September 18. The name was given on 16 September 1991.

Thalassa is irregularly shaped and shows no sign of any geological modification. It is likely that it is a rubble pile re-accreted from fragments of Neptune's original satellites, which were smashed up by perturbations from Triton
Triton (moon)
Triton is the largest moon of the planet Neptune, discovered on October 10, 1846, by English astronomer William Lassell. It is the only large moon in the Solar System with a retrograde orbit, which is an orbit in the opposite direction to its planet's rotation. At 2,700 km in diameter, it is...
soon after that moon's capture into a very eccentric initial orbit. Unusually for irregular bodies, it appears to be roughly disk-shaped.

Since the Thalassian orbit is below Neptune's synchronous orbit
Synchronous orbit
A synchronous orbit is an orbit in which an orbiting body has a period equal to the average rotational period of the body being orbited , and in the same direction of rotation as that body.-Properties:...
radius, it is slowly spiralling inward due to tidal deceleration and may eventually impact Neptune's atmosphere, or break up into a planetary ring
Planetary ring
A planetary ring is a ring of cosmic dust and other small particles orbiting around a planet in a flat disc-shaped region.The most notable planetary rings known in Earth's solar system are those around Saturn, but the other three gas giants of the solar system possess ring systems of their...
upon passing its Roche limit
Roche limit
The Roche limit , sometimes referred to as the Roche radius, is the distance within which a celestial body, held together only by its own gravity, will disintegrate due to a second celestial body's tidal forces exceeding the first body's gravitational self-attraction...
due to tidal stretching. Relatively soon after, the spreading debris may impinge upon Despina
Despina (moon)
Despina , also known as Neptune V, is the third closest inner satellite of Neptune. It is named after Despoina, a nymph who was a daughter of Poseidon and Demeter....
's orbit.