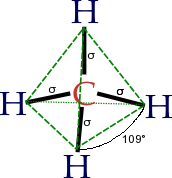 In a tetrahedral molecular geometry a central atom
Atom
The atom is a basic unit of matter that consists of a dense central nucleus surrounded by a cloud of negatively charged electrons. The atomic nucleus contains a mix of positively charged protons and electrically neutral neutrons...
is located at the center with four substituent
Substituent
In organic chemistry and biochemistry, a substituent is an atom or group of atoms substituted in place of a hydrogen atom on the parent chain of a hydrocarbon...
s that are located at the corners of a tetrahedron
Tetrahedron
In geometry, a tetrahedron is a polyhedron composed of four triangular faces, three of which meet at each vertex. A regular tetrahedron is one in which the four triangles are regular, or "equilateral", and is one of the Platonic solids...
. The bond angles are cos1(1/3) ≈ 109.5° when all four substituents are the same, as in CH4
Methane
Methane is a chemical compound with the chemical formula . It is the simplest alkane, the principal component of natural gas, and probably the most abundant organic compound on earth. The relative abundance of methane makes it an attractive fuel...
. This molecular geometry
Molecular geometry
Molecular geometry or molecular structure is the three-dimensional arrangement of the atoms that constitute a molecule. It determines several properties of a substance including its reactivity, polarity, phase of matter, color, magnetism, and biological activity.- Molecular geometry determination...
is common throughout the first half of the periodic table. The perfectly symmetrical tetrahedron belongs to point group
Point group
In geometry, a point group is a group of geometric symmetries that keep at least one point fixed. Point groups can exist in a Euclidean space with any dimension, and every point group in dimension d is a subgroup of the orthogonal group O...
Td, but most tetrahedral molecules are not of such high symmetry. Tetrahedral molecules can be chiral
Chirality (chemistry)
A chiral molecule is a type of molecule that lacks an internal plane of symmetry and thus has a non-superimposable mirror image. The feature that is most often the cause of chirality in molecules is the presence of an asymmetric carbon atom....
.

Aside from virtually all saturated organic compounds, most compounds of Si, Ge, and Sn are tetrahedral. Often tetrahedral molecules feature multiple bonding to the outer ligands, as in xenon tetroxide
Xenon tetroxide
Xenon tetroxide is a chemical compound of xenon and oxygen with molecular formula XeO4, remarkable for being a relatively stable compound of a noble gas...
(XeO4), the perchlorate
Perchlorate
Perchlorates are the salts derived from perchloric acid . They occur both naturally and through manufacturing. They have been used as a medicine for more than 50 years to treat thyroid gland disorders. They are used extensively within the pyrotechnics industry, and ammonium perchlorate is also a...
ion (ClO4), the sulfate
Sulfate
In inorganic chemistry, a sulfate is a salt of sulfuric acid.-Chemical properties:...
ion (SO42), the phosphate
Phosphate
A phosphate, an inorganic chemical, is a salt of phosphoric acid. In organic chemistry, a phosphate, or organophosphate, is an ester of phosphoric acid. Organic phosphates are important in biochemistry and biogeochemistry or ecology. Inorganic phosphates are mined to obtain phosphorus for use in...
ion (PO43). Thiazyl trifluoride
Thiazyl trifluoride
Thiazyl trifluoride is a chemical compound of nitrogen, sulfur, and fluorine, having the formula NSF3. It exists as a stable, colourless gas, and is an important precursor to other sulfur-nitrogen-fluorine compounds...
, SNF3 is tetrahedral, featuring a sulfur-to-nitrogen triple bond.

Ammonia can be classified as tetrahedral, if one considers the lone pair as a ligand as in the language of VSEPR theory. The H-N-H angles are 107°, being contracted from 109.4°, a difference attributed to the influence of the lone pair. Ammonia is actually classified as pyramidal as nonbonding electron pairs have a greater repulsive influence.

Again the geometry is widespread, particularly so for complexes where the metal has d0 or d10 configuration. Illustrative examples include tetrakis(triphenylphosphine)palladium(0)
Tetrakis(triphenylphosphine)palladium(0)
Tetrakispalladium is the chemical compound Pd[P3]4, often abbreviated Pd4, or even PdP4. It is a bright yellow crystalline solid that becomes brown upon decomposition in air.-Structure and properties:...
, nickel carbonyl
Nickel carbonyl
Nickel carbonyl is the organonickel compound with the formula Ni4. This pale-yellow liquid is the principal carbonyl of nickel. It is an intermediate in the Mond process for the purification of nickel and a reagent in organometallic chemistry...
, and titanium tetrachloride
Titanium tetrachloride
Titanium tetrachloride is the inorganic compound with the formula TiCl4. It is an important intermediate in the production of titanium metal and the pigment titanium dioxide. TiCl4 is an unusual example of a metal halide that is highly volatile...
. Many complexes with incompletely filled d-shells are often tetrahedral, e.g. the tetrahalides of iron(II), cobalt(II), and nickel(II).

Geometrical constraints in a molecule can cause a severe distortion of idealized tetrahedral geometry. In compounds featuring "inverted carbon," for instance, the carbon is pyramidal.


The simplest examples of organic molecules displaying inverted carbon are the smallest propellane
Propellane
In organic chemistry, propellane is any member of a class of polycyclic hydrocarbons, whose carbon skeleton consists of three rings of carbon atoms sharing a common carbon-carbon covalent bond...
s, such as [1.1.1]propellane
1.1.1-Propellane
[1.1.1]Propellane is an organic compound, the simplest member of the propellane family. It is a hydrocarbon with formula C5H6 or C23. The molecular structure consists of three rings of three carbon atoms each, sharing one C-C bond....
; or more generally paddlanes, and pyramidanes. Such molecules are typically strained
Strain energy
In a molecule, strain energy is released when the constituent atoms are allowed to rearrange themselves in a chemical reaction or a change of chemical conformation in a way that:* angle strain,* torsional strain,* ring strain and/or steric strain,...
, resulting in increased reactivity.

A tetrahedron can also be distorted by increasing the angle between two of the bonds. In the extreme case, flattening results. For carbon this phenomenon can be observed in a class of compounds called the fenestrane
Fenestrane
A fenestrane in organic chemistry is a type of chemical compound with a central quaternary carbon atom which serves as a common vertex for four fused carbocycles. They can be regarded as spiro compounds twice over. Because of their inherent strain and instability fenestranes are of theoretical...
s.