Encyclopedia
The Terrapin "4-ton amphibian" was a British
United Kingdom
The United Kingdom of Great Britain and Northern IrelandIn the United Kingdom and Dependencies, other languages have been officially recognised as legitimate autochthonous languages under the European Charter for Regional or Minority Languages...
-manufactured, amphibious armour
Armour
Armour or armor is protective covering used to prevent damage from being inflicted to an object, individual or a vehicle through use of direct contact weapons or projectiles, usually during combat, or from damage caused by a potentially dangerous environment or action...
ed transport vehicle of the Second World War. It was first used at Antwerp in 1944, and to great effect during the Battle of the Scheldt
Battle of the Scheldt
The Battle of the Scheldt was a series of military operations of the Canadian 1st Army, led by Lieutenant-General Guy Simonds. The battle took place in northern Belgium and southwestern Netherlands during World War II from 2 October-8 November 1944...
.

Due to a shortage of US-manufactured DUKW
DUKW
The DUKW is a six-wheel-drive amphibious truck that was designed by a partnership under military auspices of Sparkman & Stephens and General Motors Corporation during World War II for transporting goods and troops over land and water and for use approaching and crossing beaches in amphibious...
s the British Ministry of Supply commissioned Thornycroft
Thornycroft
Thornycroft was a United Kingdom-based vehicle manufacturer which built coaches, buses, and trucks from 1896 until 1977.-History:Thornycroft started out with steam vans and lorries. John Isaac Thornycroft, the naval engineer, built his first steam lorry in 1896...
to design an amphibious vehicle
Amphibious vehicle
An amphibious vehicle , is a vehicle or craft, that is a means of transport, viable on land as well as on water – just like an amphibian....
capable of ferrying supplies and troops from ship to shore for the D-Day landings.

A Mark 2 Terrapin with a number of improvements reached the prototype stage but the war ended before it entered production.


Design of the Mark 1 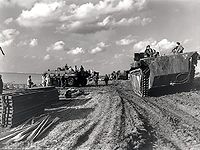 Despite success in its first military action, the Terrapin was not an overall successful design, and had many significant defects which were never overcome in service.

One interesting feature was that when being driven on a level surface the vehicle was supported on the four middle wheels, the front and rear wheels remaining clear of the surface (the front pair being raised significantly, the rear pair only slightly). The front and rear wheels provided support and traction on soft surfaces and when climbing slopes such as riverbanks. When driven in the water it was propelled by two rear-mounted propellers.

These failings quickly led to the abandonment of the design in favor of the development of the Mark 2, but the growing availability of large numbers of the much more successful American DUKW
DUKW
The DUKW is a six-wheel-drive amphibious truck that was designed by a partnership under military auspices of Sparkman & Stephens and General Motors Corporation during World War II for transporting goods and troops over land and water and for use approaching and crossing beaches in amphibious...
made further development unnecessary.


Design of the Mark 2

This was similar to the Mark 1 but had a forward driving position. It was a much longer vehicle, being 31 feet (9.4 m) long compared with the 23 feet (7 m) length of the Mark 1.

Kevin Wheatcroft, a collector in Great Britain, is known as being the owner of an unrestored Terrapin Mk1. John Belfield, a collector in Australia, also owns a Terrapin wreck, which still carries the original Australian Registration Number (ARN) 149391.