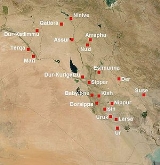 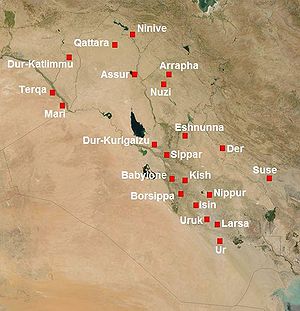 Terqa is the name of an ancient city discovered at the site of Tell Ashara on the banks of the middle Euphrates
Euphrates
The Euphrates is the longest and one of the most historically important rivers of Western Asia. Together with the Tigris, it is one of the two defining rivers of Mesopotamia...
in Deir ez-Zor Governorate
Deir ez-Zor Governorate
Deir ez-Zor Governorate or Muhafazah Dayr az Zawr is one of the fourteen governorates of Syria. It is situated in eastern Syria, bordering Iraq. It has an area of 33,060 km² and a population of 1,202,000...
, Syria
Syria
Syria , officially the Syrian Arab Republic , is a country in Western Asia, bordering Lebanon and the Mediterranean Sea to the West, Turkey to the north, Iraq to the east, Jordan to the south, and Israel to the southwest....
, approximately 80 km from the modern border with Iraq
Iraq
Iraq ; officially the Republic of Iraq is a country in Western Asia spanning most of the northwestern end of the Zagros mountain range, the eastern part of the Syrian Desert and the northern part of the Arabian Desert....
. Its name had become Sirqu by Neo-Assyrian times.

Little is yet known of the early history of Terqa, though it was a sizable entity even in the
Early Dynastic period.

The main site is around 20 acres (8.1 ha) in size and has a height of 60 feet (18.3 m). The remains
of Terqa are partly covered by the modern town of Ashara, which limits the
possibilities for excavation.

The site was briefly excavated by E. Herzfeld in 1910.

Notable features found at Terqa include