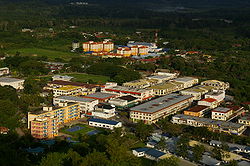 Tenom is a town located in Interior Division
Interior Division
Interior Division is an administrative division of Sabah, east Malaysia, on the island of Borneo. It occupies the southwest portion of Sabah, bordering on Sarawak...
of Sabah
Sabah
Sabah is one of 13 member states of Malaysia. It is located on the northern portion of the island of Borneo. It is the second largest state in the country after Sarawak, which it borders on its southwest. It also shares a border with the province of East Kalimantan of Indonesia in the south...
, east Malaysia on the island of Borneo
Borneo
Borneo is the third largest island in the world and is located north of Java Island, Indonesia, at the geographic centre of Maritime Southeast Asia....
. The town was called Fort Birch in the early colonial period. Its population was estimated to be around 46,200 in the year 2000.

The principal ethnic groups are Murut
Murut people
The Murut is the warrior tribe of indigenous ethnic groups inhabiting northern inland regions of Borneo. The Murut comprise several people groups that are scattered in parts of Borneo Island including Brunei, Kalimantan...
(60%), followed by Chinese
Han Chinese
Han Chinese are an ethnic group native to China and are the largest single ethnic group in the world.Han Chinese constitute about 92% of the population of the People's Republic of China , 98% of the population of the Republic of China , 78% of the population of Singapore, and about 20% of the...
(20%), Malay
Malay people
Malays are an ethnic group of Austronesian people predominantly inhabiting the Malay Peninsula, including the southernmost parts of Thailand, the east coast of Sumatra, the coast of Borneo, and the smaller islands which lie between these locations...
(10%), and Kadazan
Kadazan
The Kadazans are an ethnic group indigenous to the state of Sabah in Malaysia. They are found mainly on the west coast of Sabah, the surrounding locales, and various locations in the interior. Due to similarities in culture and language with the Dusun ethnic group, and also because of other...
-Dusun
Dusun
Dusun is the collective name of a tribe or ethnic and linguistic group in the Malaysian state of Sabah of North Borneo. Due to similarities in culture and language with the Kadazan ethnic group, a new unified term called "Kadazan-Dusun" was created. Collectively, they form the largest ethnic group...
(8%). Most of the Chinese in Tenom are of Hakka descent. More specifically, most are descended from migrants who came from the country of Longchuan in Guangdong
Guangdong
Guangdong is a province on the South China Sea coast of the People's Republic of China. The province was previously often written with the alternative English name Kwangtung Province...
, China. Tenom , which is one of the oldest Chinese settlements in Sabah
Sabah
Sabah is one of 13 member states of Malaysia. It is located on the northern portion of the island of Borneo. It is the second largest state in the country after Sarawak, which it borders on its southwest. It also shares a border with the province of East Kalimantan of Indonesia in the south...
, with its rich and fertile land attracting many of the early Chinese migrants, specifically the Hakkas who, by tradition, were mainly agriculturalists. Today, the area is still primarily an agricultural zone, with soy beans, maize
Maize
Maize known in many English-speaking countries as corn or mielie/mealie, is a grain domesticated by indigenous peoples in Mesoamerica in prehistoric times. The leafy stalk produces ears which contain seeds called kernels. Though technically a grain, maize kernels are used in cooking as a vegetable...
, vegetables and cacao being the major crops. Tenom is one of Sabah's more scenic interior locations, with the Crocker Range
Crocker Range
Crocker Range , is a mountain range on the island of Borneo. Politically, it is within the boundary of the Malaysian state of Sabah, located in the northern half of Borneo. The mountain range separates the east coast and west coast of Sabah. At an average height of 1800m, it is the highest mountain...
towering impressively immediately behind town. It is also known as the "gateway to Murut country". The annual festival of the Murut community known as Pesta Kalimaran is held in Tenom.

In the center of Tenom is a statue to Ontoros Antonom (1885-1915), who led the Rundum Revolt of the Murut people against the British colonists in the Rundum District of Tenom in 1915.

Tenom is the final stop for passengers on the North Borneo Railway.