Encyclopedia
Telewizja Polska Spółka Akcyjna (tɛlɛˈvizja ˈpɔlska ˈspuwka akˈt͡sɨjna) (TVP S.A. ˈtɛ ˈfaw ˈpɛ ˈɛs ˈa, often abbreviated to only TVP ˈtɛ ˈfaw ˈpɛ, Polish Television) is Poland
Poland
Poland , officially the Republic of Poland , is a country in Central Europe bordered by Germany to the west; the Czech Republic and Slovakia to the south; Ukraine, Belarus and Lithuania to the east; and the Baltic Sea and Kaliningrad Oblast, a Russian exclave, to the north...
's public broadcasting
Public broadcasting
Public broadcasting includes radio, television and other electronic media outlets whose primary mission is public service. Public broadcasters receive funding from diverse sources including license fees, individual contributions, public financing and commercial financing.Public broadcasting may be...
corporation
Corporation
A corporation is created under the laws of a state as a separate legal entity that has privileges and liabilities that are distinct from those of its members. There are many different forms of corporations, most of which are used to conduct business. Early corporations were established by charter...
. About a third of TVP's income comes from a broadcast receiver licence
Television licence
A television licence is an official licence required in many countries for the reception of television broadcasts...
, while the rest is covered by commercials
Television advertisement
A television advertisement or television commercial, often just commercial, advert, ad, or ad-film – is a span of television programming produced and paid for by an organization that conveys a message, typically one intended to market a product...
and sponsorships. 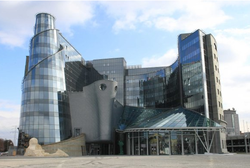 Timeline of the TVP history

Non-Polish language broadcasting includes Belsat TV
Belsat TV
Belsat TV is a satellite television channel aimed at Belarus. It is intended to provide an alternative to the censorship of Belarusian state-run television. Its slogan is "Belsat - your right to choose"...
- channel in the Belarusian language
Belarusian language
The Belarusian language , sometimes referred to as White Russian or White Ruthenian, is the language of the Belarusian people...
presenting news and subject-specific programming for the people of Belarus
Belarus
Belarus , officially the Republic of Belarus, is a landlocked country in Eastern Europe, bordered clockwise by Russia to the northeast, Ukraine to the south, Poland to the west, and Lithuania and Latvia to the northwest. Its capital is Minsk; other major cities include Brest, Grodno , Gomel ,...
. Planned TVP channels are: TVP Rozrywka (entertainment and comedy) as well as TVP Parlament (parliamentary channel).

TVP is cooperating with the French-German TV network ARTE
Arte
Arte is a Franco-German TV network. It is a European culture channel and aims to promote quality programming especially in areas of culture and the arts...
, this cooperation has been suspended in February 2009 as TVP's new Intendant's, Piotr Farfał
Piotr Farfał
Piotr Grzegorz Farfał is a Polish rightwing Politician of the League of Polish Families and former President of the Polish national TV network TVP.- Biography :...
, views were incompatible with Arte’s "philosophy based on intercultural exchange" and "the party that TVP's chairman is presently connected with does not share European values".