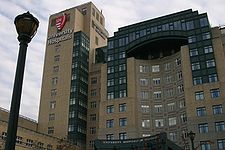 A teaching hospital is a hospital
Hospital
A hospital is a health care institution providing patient treatment by specialized staff and equipment. Hospitals often, but not always, provide for inpatient care or longer-term patient stays....
that provides clinical education and training to future and current doctors, nurses, and other health professionals, in addition to delivering medical care to patients. They are generally affiliated with medical school
Medical school
A medical school is a tertiary educational institution—or part of such an institution—that teaches medicine. Degree programs offered at medical schools often include Doctor of Osteopathic Medicine, Bachelor/Doctor of Medicine, Doctor of Philosophy, master's degree, or other post-secondary...
s or universities
University
A university is an institution of higher education and research, which grants academic degrees in a variety of subjects. A university is an organisation that provides both undergraduate education and postgraduate education...
(hence the alternative term university hospital), and may be owned by a university or may form part of a wider regional or national health system.

Some teaching hospitals also have a commitment to research and are centers for experimental, innovative and technically sophisticated services.

Although institutions for caring for the sick are known to have existed much earlier in history, the first teaching hospital, where students were authorized to methodically practice on patients under the supervision of physicians as part of their education, was reportedly the Academy of Gundishapur
Academy of Gundishapur
The Academy of Gondishapur , also Jondishapur , was a renowned academy of learning in the city of Gundeshapur during late antiquity, the intellectual center of the Sassanid empire. It offered training in medicine, philosophy, theology and science. The faculty were versed in the Zoroastrian and...
in the Persian Empire during the Sassanid era.

The American
United States
The United States of America is a federal constitutional republic comprising fifty states and a federal district...
television shows St. Elsewhere
St. Elsewhere
St. Elsewhere is an American medical drama television series that originally ran on NBC from October 26, 1982 to May 25, 1988. The series is set at fictional St. Eligius, a decaying urban teaching hospital in Boston's South End neighborhood...
, Chicago Hope
Chicago Hope
Chicago Hope is an American medical drama series created by David E. Kelley that ran from September 18, 1994, to May 5, 2000. It takes place in a fictional private charity hospital.-Premise:The show stars Mandy Patinkin as Dr...
, ER
ER (TV series)
ER is an American medical drama television series created by novelist Michael Crichton that aired on NBC from September 19, 1994 to April 2, 2009. It was produced by Constant c Productions and Amblin Entertainment, in association with Warner Bros. Television...
, Scrubs
Scrubs (TV series)
Scrubs is an American medical comedy-drama television series created in 2001 by Bill Lawrence and produced by ABC Studios. The show follows the lives of several employees of the fictional Sacred Heart, a teaching hospital. It features fast-paced screenplay, slapstick, and surreal vignettes...
, House
House (TV series)
House is an American television medical drama that debuted on the Fox network on November 16, 2004. The show's central character is Dr. Gregory House , an unconventional and misanthropic medical genius who heads a team of diagnosticians at the fictional Princeton-Plainsboro Teaching Hospital in...
, and Grey's Anatomy
Grey's Anatomy
Grey's Anatomy is an American medical drama television series created by Shonda Rhimes. The series premiered on March 27, 2005 on ABC; since then, seven seasons have aired. The series follows the lives of interns, residents and their mentors in the fictional Seattle Grace Mercy West Hospital in...
all take place in teaching hospitals (St. Eligius Hospital, Chicago Hope Hospital, County General Hospital, Sacred Heart Hospital, Princeton-Plainsboro, and Seattle Grace, respectively).