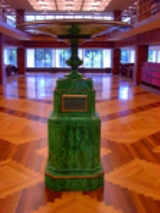 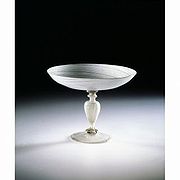 A tazza is a shallow saucer-like dish either mounted on a stem and foot or on a foot alone. The word has been generally adopted by archaeologists and connoisseur
Connoisseur
A connoisseur is a person who has a great deal of knowledge about the fine arts, cuisines, or an expert judge in matters of taste.Modern connoisseurship must be seen along with museums, art galleries and "the cult of originality"...
s for this type of vessel, used either for drinking, serving small items of food, or just for display.

The colossal tazza in the Linda Hall Library
Linda Hall Library
The Linda Hall Library is a privately-endowed American library of science, engineering and technology located in Kansas City, Missouri, about a "five-minute walk from Kansas City’s Nelson-Atkins Museum of Art." It is the "largest independently funded public library of science, engineering and...
, Kansas City, Missouri
Kansas City, Missouri
Kansas City, Missouri is the largest city in the U.S. state of Missouri and is the anchor city of the Kansas City Metropolitan Area, the second largest metropolitan area in Missouri. It encompasses in parts of Jackson, Clay, Cass, and Platte counties...
(illustrated), is one of the largest pieces of malachite in North America. It was presented by Czar Nicholas II
Nicholas II of Russia
Nicholas II was the last Emperor of Russia, Grand Prince of Finland, and titular King of Poland. His official short title was Nicholas II, Emperor and Autocrat of All the Russias and he is known as Saint Nicholas the Passion-Bearer by the Russian Orthodox Church.Nicholas II ruled from 1894 until...
to August Heckscher
August Heckscher
-Biography:Born in Hamburg, Germany, Heckscher emigrated to the United States in 1867. He initially worked in his cousin Richard Heckscher's coal mining operation as a laborer, studying English at night. Several years later he formed a partnership with his cousin under the name of Richard Heckscher...
in 1910 and given to the Linda Hall Library in 1972 by Mrs. Helen Spencer. It stands as the focal point in the center of the Main Reading Room of the library.
The source of this article is wikipedia, the free encyclopedia.  The text of this article is licensed under the GFDL.