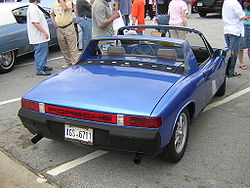 Targa top, targa for short, is a semi-convertible
Convertible
A convertible is a type of automobile in which the roof can retract and fold away having windows which wind-down inside the doors, converting it from an enclosed to an open-air vehicle...
car body style
Car body style
Automobiles' body styles are highly variable. Some body styles remain in production, while others become less common or obsolete. They may or may not correlate to a car's price, size or intended market classification. The same car model might be available in multiple body styles comprising a...
with a removable roof section and a full width roll bar
Roll cage
A roll cage is a specially constructed frame built in the cab of a vehicle to protect its occupants from being injured in an accident, particularly in the event of a roll-over. Roll cages are used in nearly all purpose-built racecars, and in most cars modified for racing...
behind the seats. The term was first used on the 1966 Porsche 911
Porsche 911
The Porsche 911 is a luxury 2-door sports coupe made by Porsche AG of Stuttgart, Germany. It has a distinctive design, rear-engined and with independent rear suspension, an evolution of the swing axle on the Porsche 356. The engine was also air-cooled until the introduction of the Type 996 in 1998...
Targa, and it remains a registered trademark of Porsche AG.

The rear window is normally fixed, but on some targa models, it is removable or foldable, making it a convertible-type vehicle. Any piece of metal or trim which rises up from the side of a car and continues in an uninterrupted line over the roof and down the other side is sometimes called a targa band, targa bar or a wrapover band.

Targa tops are different from T-top
T-top
An automotive T-top is an automobile roof with removable panels on either side of a rigid bar running from the center of one structural bar between pillars to the center of the next structural bar, the panels of a traditional T-top are usually made of auto grade safety glass.The T-top was patented...
s, which have a solid, non-removable bar running between the top of the windscreen and the rear roll-bar, and generally have two separate roof panels above the seats that fit between the window and central t-bar.

The word targa first came into use from the 1966 Porsche 911 Targa, though the first production car with this system as an option was actually released five years before: namely the 1961 Triumph TR4
Triumph TR4
The Triumph TR4 was a sports car built in the United Kingdom by the Standard Triumph Motor Company and introduced in 1961. Code named "Zest" during development, the car was based on the chassis and drivetrain of the previous TR sports cars, but with a modern Michelotti styled body. 40,253 cars...
, where it was commonly called a surrey
Surrey (carriage)
A surrey is a horse-drawn, four-wheeled, two-seated pleasure carriage with an open spindle seat.-Overview:The name comes from Surrey, the county in southern England where it was first built. It resembles a cabriolet but has a straight or nearly straight bottom, sometimes cut under...
top. It was also used on the 1964 SAAB Catherina
Saab Catherina
The Saab Catherina is a 1964 prototype automobile, commissioned by the Swedish automaker Saab, designed by Sixten Sason and made at the workshops of the Aktiebolaget Svenska Järnvägsverkstäderna in Katrineholm, Sweden...
prototype.

The targa syle roof opening became popular in the 1960s and 1970s, when there were fears that the Department of Transportation
United States Department of Transportation
The United States Department of Transportation is a federal Cabinet department of the United States government concerned with transportation. It was established by an act of Congress on October 15, 1966, and began operation on April 1, 1967...
(DOT) in the United States
United States
The United States of America is a federal constitutional republic comprising fifty states and a federal district...
would ban
Ban (law)
A ban is, generally, any decree that prohibits something.Bans are formed for the prohibition of activities within a certain political territory. Some see this as a negative act and others see it as maintaining the "status quo"...
convertibles, due to concerns over the safety of occupants when a car overturns. As a result, manufacturers adopted Targa tops or T bars. As Porsche helped to popularise this body style, they took out a trademark for the Targa name and manufacturers sought for alternative names for their removable tops. Porsche got the name "Targa" from the Targa Florio
Targa Florio
The Targa Florio was an open road endurance automobile race held in the mountains of Sicily near Palermo. Founded in 1906, it was the oldest sports car racing event, part of the World Sportscar Championship between 1955 and 1973...
, the famous road race in Sicily
Sicily
Sicily is a region of Italy, and is the largest island in the Mediterranean Sea. Along with the surrounding minor islands, it constitutes an autonomous region of Italy, the Regione Autonoma Siciliana Sicily has a rich and unique culture, especially with regard to the arts, music, literature,...
where Porsche was very successful. Targa means "plate" in Italian.

Targa and T-top numbers have slowly declined as manufacturers discontinued them in favour of full convertibles with retractable hardtops and folding metal roofs such as the Mercedes-Benz SLK, and by better structural engineering with pop-up roll over bars behind the seats and front roll-over bar
Roll cage
A roll cage is a specially constructed frame built in the cab of a vehicle to protect its occupants from being injured in an accident, particularly in the event of a roll-over. Roll cages are used in nearly all purpose-built racecars, and in most cars modified for racing...
incorporated into the front windscreen,

1996 saw the debut of a retractable glass roof in the Porsche 993
Porsche 993
The Porsche 993 is the company's internal name for the version of the Porsche 911 model manufactured and sold between late 1993 and early 1998, replacing the 964...
Targa, a design continued on the 996 Targa. The glass roof retracted underneath the rear window revealing a large opening. A shade was there to help prevent the greenhouse effect
Greenhouse effect
The greenhouse effect is a process by which thermal radiation from a planetary surface is absorbed by atmospheric greenhouse gases, and is re-radiated in all directions. Since part of this re-radiation is back towards the surface, energy is transferred to the surface and the lower atmosphere...
of the closed roof. This system was a complete redesign, as previous Targa models had a removable roof section and a wide B-pillar
Pillar (car)
Pillars are the vertical supports of the greenhouse of an automobile — known respectively as the A, B, C or D-pillar moving in profile view from the front to rear....
functioning as a roll bar. The new glass roof design allowed the 993 Targa to retain nearly the same side-on profile as the other 911 Carrera variants and eliminated the inconvenience of storing the removed top of the old system. The Targa had the body of the Cabriolet with the Targa glass roof replacing the fabric roof. The 911 Targa continued with the all-new 996-model and gained a lifting hatchback glass window. This, in turn, was used on the later 997 model of 911.

Ferrari introduced a hybrid variation of the targa roof and folding metal roof with the 180 degree rotating roof featured on the 2005 Ferrari 575M Maranello
Ferrari 575M Maranello
The Ferrari 575M Maranello is a two-seat, two-door, grand tourer built by Ferrari. Launched in 2002, it is essentially an updated 550 Maranello featuring minor styling changes from Pininfarina...
Superamerica. The concept was also used in the 2010 Renault Wind
Renault Wind
The Renault Wind is a roadster by the French automobile manufacturer, Renault. The Wind was originally a concept car unveiled on September 2004 at the Paris Motor Show as a 2+1 roadster....
.

Examples of the Targa car
Automobile
An automobile, autocar, motor car or car is a wheeled motor vehicle used for transporting passengers, which also carries its own engine or motor...
and T-bar top body style include:
The source of this article is wikipedia, the free encyclopedia.  The text of this article is licensed under the GFDL.