Encyclopedia
Pillars are the vertical supports of the greenhouse of an automobile — known respectively as the A, B, C or D-pillar moving in profile view from the front to rear.

Consistently denoting a roof's successive structural member provides a reference point for discussion. As an example, rescue teams
Heavy rescue vehicle
A heavy rescue vehicle is a type of specialty firefighting or EMS apparatus. They are primarily designed to provide the specialized equipment necessary for technical rescue situations such as auto accidents requiring vehicle extrication, building collapses, confined space rescue, rope rescues and...
employ pillar nomenclature to facilitate communication when cutting vehicles, for example with the jaws of life
Hydraulic Rescue Tools
Hydraulic rescue tools are used by emergency rescue personnel to assist vehicle extrication of crash victims, as well as other rescues from small spaces. These tools include cutters, spreaders, door busters and rams...
.

Pillars are implied, whether they exist or not; where a design's greenhouse features a break between windows or doors without vertical support at that position, the non-existent pillar is "skipped" when naming the other pillars. Thus a 2-door coupé
Coupé
A coupé or coupe is a closed car body style , the precise definition of which varies from manufacturer to manufacturer, and over time...
or a three box designed
Three-box styling
Three-box design is a broad automotive styling term describing a coupé, sedan, notchback or hatchback where — when viewed in profile — principal volumes are articulated into three separate compartments or boxes: engine, passenger and cargo....
sedan could have its rearmost pillar called the C-pillar even in the absence of a B-pillar.

Vehicles omitting the B-pillar were once widely called pillarless hardtops or hardtops. In the early 1970s, General Motors broadened their definition of "hardtop" to include models with a B-pillar: "up to then, everybody thought a hardtop was a car without a center pillar." 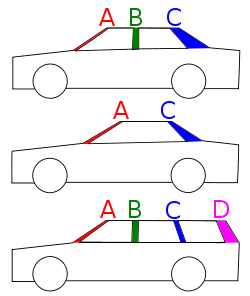 In addition to the pillar nomenclature derived from viewing an automobile in profile, some older cars have a two-part windshield
Windshield
The windshield or windscreen of an aircraft, car, bus, motorbike or tram is the front window. Modern windshields are generally made of laminated safety glass, a type of treated glass, which consists of two curved sheets of glass with a plastic layer laminated between them for safety, and are glued...
or split rear window, with the two halves separated by a pillar.