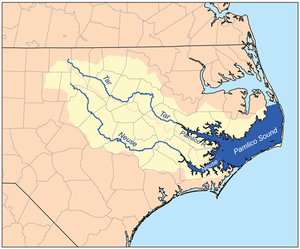 The Tar River is a river
River
A river is a natural watercourse, usually freshwater, flowing towards an ocean, a lake, a sea, or another river. In a few cases, a river simply flows into the ground or dries up completely before reaching another body of water. Small rivers may also be called by several other names, including...
that is approximately 346 kilometres (215 mi) long, of northeast North Carolina
North Carolina
North Carolina is a state located in the southeastern United States. The state borders South Carolina and Georgia to the south, Tennessee to the west and Virginia to the north. North Carolina contains 100 counties. Its capital is Raleigh, and its largest city is Charlotte...
flowing generally southeast to an estuary
Estuary
An estuary is a partly enclosed coastal body of water with one or more rivers or streams flowing into it, and with a free connection to the open sea....
of Pamlico Sound
Pamlico Sound
Pamlico Sound in North Carolina, is the largest lagoon along the U.S. East Coast, being long and 24 to 48 km wide. It is a body of water separated from the Atlantic Ocean by the Outer Banks, a row of low, sandy barrier islands, including Cape Hatteras. The Neuse and Pamlico rivers flow in...
. The Tar River becomes the tidal Pamlico River
Pamlico River
The Pamlico River is a tidal river that flows into Pamlico Sound, in North Carolina in the United States of America. It is formed by the confluence of the Tar River and Tranters Creek....
once it underpasses the U.S. Highway 17
U.S. Route 17
U.S. Route 17 or U.S. Highway 17 is a north–south United States highway. The highway spans the southeastern United States and is close to the Atlantic Coast for much of its length. The highway's southern terminus is at Punta Gorda, Florida, at an intersection with U.S. Route 41...
Bridge in Washington, North Carolina
Washington, North Carolina
Washington is a city in Beaufort County, North Carolina, United States. The population was 9,744 at the 2010 census. It is the county seat of Beaufort County. The closest major city is Greenville, approximately 20 miles to the west....
.

North Carolina was originally a naval stores colony--that is, the blanket of long leaf pines that covered the coastal plain was used by the British Navy for ships' masts and the pine pitch was used to manufacture tar caulking for vessels. The river derives its name from its historic use as a major route for tar-laden barges as they headed to the sea. The city of Tarboro is on the banks of the river.

The river was strongly affected by Hurricane Floyd
Hurricane Floyd
Hurricane Floyd was the sixth named storm, fourth hurricane, and third major hurricane in the 1999 Atlantic hurricane season. Floyd triggered the third largest evacuation in US history when 2.6 million coastal residents of five states were ordered from their homes as it approached...
in 1999 and caused much flooding in the area. The Tar River suffered the worst flooding from the hurricane, exceeding 500-year flood levels along its lower stretches; it crested 24 feet (7.3 m) above flood stage.
When the river flooded in 1999, the height in Greenville was approximately 30ft.

There is also a Tar River in Montserrat
Montserrat
Montserrat is a British overseas territory located in the Leeward Islands, part of the chain of islands called the Lesser Antilles in the West Indies. This island measures approximately long and wide, giving of coastline...
, West Indies, a river Tar
River Tar
The Tar is a river in South Tipperary, Ireland. It joins the Suir between the towns of Ardfinnan and Newcastle. The Tar's tributaries include the River Duag which joins it between Clogheen and Ballyporeen....
in Ireland
Ireland
Ireland is an island to the northwest of continental Europe. It is the third-largest island in Europe and the twentieth-largest island on Earth...
,and a Tar River in south Kyrgyzstan
Kyrgyzstan
Kyrgyzstan , officially the Kyrgyz Republic is one of the world's six independent Turkic states . Located in Central Asia, landlocked and mountainous, Kyrgyzstan is bordered by Kazakhstan to the north, Uzbekistan to the west, Tajikistan to the southwest and China to the east...
.
The source of this article is wikipedia, the free encyclopedia.  The text of this article is licensed under the GFDL.