Encyclopedia
Tantrix is a hexagonal tile-based
Tile-based game
A tile-based game is a game that uses tiles as one of the fundamental elements of play. Traditional tile-based games use small tiles as playing pieces for gambling or entertainment games...
abstract game invented by Mike McManaway from New Zealand
New Zealand
New Zealand is an island country in the south-western Pacific Ocean comprising two main landmasses and numerous smaller islands. The country is situated some east of Australia across the Tasman Sea, and roughly south of the Pacific island nations of New Caledonia, Fiji, and Tonga...
. Each of the 56 different tiles in the set contains three lines, going from one edge of the tile to another. No two lines on a tile have the same colour. There are four colours in the set: red, yellow, blue, and green. No two tiles are identical, and each is individually numbered from 1 through 56.

In the multiplayer version of the game, each player chooses a colour, so you have between two and four players. Each draws one tile from the bag, and the person who draws the highest number goes first.

Each player then takes six tiles from the bag, and places them face up in front of them. The first person plays one tile, usually with their colour on it. Play then rotates clockwise
Clockwise
Circular motion can occur in two possible directions. A clockwise motion is one that proceeds in the same direction as a clock's hands: from the top to the right, then down and then to the left, and back to the top...
. After playing a tile, each player takes a replacement tile from the bag, so that they always have six in front of them. Tiles played must match the colour of the edges adjoining it.

When three tiles surround an empty space, so that it is effectively half covered, this is called a forced space. If the person whose turn it is has a tile that fills that space, then they must play it. They repeat this process until there is no more forced spaces that they can fill; at which stage, they make a free move, where they can play any tile, as long as they don't breach the three restriction rules given below. Once they have had a free move, they must then fill any more forced spaces that they can.

The three restriction rules are:

Once there are no tiles left in the bag, the three restriction rules do not apply.

The aim of the game is to get the longest line or loop in your colour. Each tile in a line counts as one point, and in a loop is two points. Only the highest scoring line or loop counts.

The first version of Tantrix was created by Mike McManaway in 1988 and was called Mind Gamehttp://www.tantrix.com/english/TantrixHistory.html. It used 56 cardboard pieces with only two coloured lines, red and black.http://www.tantrix.com/english/TantrixHistory.html Owning a games shop, McManaway sold the game directly and following customer feedback continued to change the rules and design. In 1991, the tiles were changed to plastic and two more colours were added, allowing for four-player games.

The tiles were (and still are) hand-painted, featuring different colours to those now used, even pink. The early form of the game featured eight "Triple Intersections", but these were found to slow the game play as they only fitted into three different forced spaces (compared to 5 or 6 for all other tiles). So in 1992, the Triple Intersections were removed from the game.

Along with the multi-player version of the game, McManaway created smaller solitaire
Solitaire
Solitaire is any tabletop game which one can play by oneself or with other people. The solitaire card game Klondike is often known as simply Solitaire....
puzzles using 10 or 12 tiles that required the player to put the tiles together to create loops of certain colours.

McManaway has also created many solitaire
Solitaire
Solitaire is any tabletop game which one can play by oneself or with other people. The solitaire card game Klondike is often known as simply Solitaire....
puzzles, including 3-D versions, match only versions (requiring players to colour match tiles within a confined space) and loop and line versions (requiring players to use all the nominated tiles to complete a loop or line in a specific colour. However many of the editions are no longer available.

The main versions sold in most countries are: 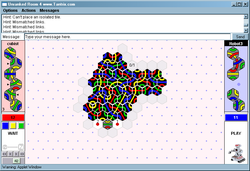 Although quiet and under-populated compared to the standards of Yahoo!
Yahoo!
Yahoo! Inc. is an American multinational internet corporation headquartered in Sunnyvale, California, United States. The company is perhaps best known for its web portal, search engine , Yahoo! Directory, Yahoo! Mail, Yahoo! News, Yahoo! Groups, Yahoo! Answers, advertising, online mapping ,...
Games and the like, playing Tantrix online has gained a dedicated following with players from all over the world competing against each other or against computer robots. Players are rated out of 1000 points according to their wins and losses and taking into account of their opponents rank. The aim of top players is to get to 1000 points (which only three players have managed so far). The goal of a regular player is to reach the score of 950 which is difficult to reach. Once this score has been attained the player can gain Tournament Rankings (ELO
Elo rating system
The Elo rating system is a method for calculating the relative skill levels of players in two-player games such as chess. It is named after its creator Arpad Elo, a Hungarian-born American physics professor....
) and eventually earn the title "Master". Masters can then play "master games" which have a different scoring system. Only a few players achieve master status, with a limit of 120 total imposed.

Serious players of Tantrix take part in a number of structured tournaments each year. Although the winners only play for bragging rights, and in the major tournaments a small trophy to keep for a year, these events are taken seriously, and are the ultimate challenge for tantricists.

The WORLD TANTRIX CHAMPIONSHIP begins every August, and takes nearly four months to complete. Only 47 competitors took place in the second WTC in 1998, but that number had grown to 200 by 2006. The tournament starts in a qualifying round, where the lower ranked players compete for selection into the main draw (128 player knockout).

There are three other "world-wide" tournaments held online each year:


There are also three continental tournaments each year:


And many national online tournaments:

In addition to these online tournaments, offline tournaments (referred to as 'Table Opens') are growing in popularity. The first Table tournament was the 2002 British Open and was mostly a local affair with 13 of the 14 entrants from Britain. As the player base widened, players started traveling more. Table Opens in Europe soon became the most popular because of the larger playing population. By 2009 there was enough demand to hold a World Tantrix Open.