Tamar site 4.2-hectare
Hectare
The hectare is a metric unit of area defined as 10,000 square metres , and primarily used in the measurement of land. In 1795, when the metric system was introduced, the are was defined as being 100 square metres and the hectare was thus 100 ares or 1/100 km2...
large, the former location of the naval basin attached to the headquarters of the British Forces Overseas Hong Kong
British Forces Overseas Hong Kong
British Forces Overseas Hong Kong consisted of the elements of the British Army, Royal Navy and Royal Air Force. Much of the British military left Hong Kong prior to the handover in 1997. The present article focuses mainly on the British garrison in Hong Kong in the post Second World War era...
, is currently the site of the Central Government Offices (headquarter) of the Hong Kong SAR Government at the harbour
Victoria Harbour
Victoria Harbour is a natural landform harbour situated between Hong Kong Island and the Kowloon Peninsula in Hong Kong. The harbour's deep, sheltered waters and strategic location on the South China Sea were instrumental in Hong Kong's establishment as a British colony and its subsequent...
front of Central
Central, Hong Kong
Central is the central business district of Hong Kong. It is located in Central and Western District, on the north shore of Hong Kong Island, across Victoria Harbour from Tsim Sha Tsui, the southernmost point of Kowloon Peninsula...
, Hong Kong Island
Hong Kong Island
Hong Kong Island is an island in the southern part of the Hong Kong Special Administrative Region. It has a population of 1,289,500 and its population density is 16,390/km², as of 2008...
, Hong Kong
Hong Kong
Hong Kong is one of two Special Administrative Regions of the People's Republic of China , the other being Macau. A city-state situated on China's south coast and enclosed by the Pearl River Delta and South China Sea, it is renowned for its expansive skyline and deep natural harbour...
.

It is currently the most expensive piece of empty land in Hong Kong, valued at $24.3 billion on the market ($9,000 per square foot). Different parties were in favour of building their own projects in the site, including the government's new headquarters, highly profitable office or retailing space, and a waterfront open green space.

HMS Tamar
HMS Tamar (1863)
HMS Tamar was a Royal Navy troopship built by the Samuda Brothers at Cubitt Town, London, and launched in Britain in 1863. She served as a supply ship from 1897 to 1941, and gave her name to the HMS Tamar shore station in Hong Kong ....
was originally the name of a British naval vessel which arrived in Hong Kong in 1897 and remained in the British territory until Japanese occupation of Hong Kong
Japanese occupation of Hong Kong
The Japanese occupation of Hong Kong began after the Governor of Hong Kong, Sir Mark Young, surrendered the territory of Hong Kong to Japan on 25 December 1941 after 18 days of fierce fighting by British and Canadian defenders against overwhelming Japanese Imperial forces. The occupation lasted...
during World War II
World War II
World War II, or the Second World War , was a global conflict lasting from 1939 to 1945, involving most of the world's nations—including all of the great powers—eventually forming two opposing military alliances: the Allies and the Axis...
in 1941. In memory of this vessel, the British named the Royal Naval station in Hong Kong "HMS Tamar
HMS Tamar (shore station)
HMS Tamar was the name for the Royal Navy's base in Hong Kong from 1897 to 1997. It took its name from HMS Tamar a ship that was used as the base until replaced by buildings ashore.-19th Century:...
". The British garrison pre-handover
Transfer of the sovereignty of Hong Kong
The transfer of sovereignty over Hong Kong from the United Kingdom to the People's Republic of China, referred to as ‘the Return’ or ‘the Reunification’ by the Chinese and ‘the Handover’ by others, took place on 1 July 1997...
was stationed at the "Prince of Wales Building", within the base, and which is part of the site.

A number of large-scale functions including expos and musical or theatrical performances had been staged at the Tamar Site before. A few examples are Saltimbanco
Saltimbanco
Saltimbanco is the oldest major touring show of Cirque du Soleil that remains active in some form. Saltimbanco ran from 1992 to 2006 in its original form, performed under a large circus tent called the Grand Chapiteau; its last performance in that form was in Rio de Janeiro, Brazil, on December 10,...
by Cirque Du Soleil
Cirque du Soleil
Cirque du Soleil , is a Canadian entertainment company, self-described as a "dramatic mix of circus arts and street entertainment." Based in Montreal, Quebec, Canada, and located in the inner-city area of Saint-Michel, it was founded in Baie-Saint-Paul in 1984 by two former street performers, Guy...
, the annual Hong Kong Product Expo, the Hong Kong International Film Festival
Hong Kong International Film Festival
The Hong Kong International Film Festival is a platform for filmmakers, film professionals and filmgoers from all over the world to launch and experience new film work. There are seminars, conferences, exhibitions, and parties celebrating the festival community...
and the ill-fated "Harbour Fest". The entire site has played host to a fun-fair in 2005 and 2006.

The Tamar site has been a target of strong criticism by the public for its poor record of music events. In 2003, the Hong Kong government made plans to create a major concert event to help Hong Kong out of the economic crisis brought about by the SARS
Severe acute respiratory syndrome
Severe Acute Respiratory Syndrome is a respiratory disease in humans which is caused by the SARS coronavirus . Between November 2002 and July 2003 an outbreak of SARS in Hong Kong nearly became a pandemic, with 8,422 cases and 916 deaths worldwide according to the WHO...
epidemic, naming it "Harbour Fest
Harbour Fest
The Hong Kong Harbour Fest , held from 17 October to 11 November 2003, was part of a HK$1 billion program to revive the economy of Hong Kong SAR after the SARS. It was a government underwritten event organised by InvestHK, under the auspices of the Economic Relaunch Working Group, in collaboration...
". The event took heavy criticism as it was considered "extremely poor organization".

In October 2006, international pop singer Mariah Carey
Mariah Carey
Mariah Carey is an American singer-songwriter, record producer, and actress. She made her recording debut with the release of her eponymous studio album in 1990, under the guidance of Columbia Records executive Tommy Mottola, whom she later married in 1993...
was scheduled for her first ever Hong Kong concert at the Tamar site, but was cancelled due to conflicts with the concert promotor, 8,000 out of the 10,000 tickets were sold 2 days prior to the show.


Use during the sixth WTO Ministerial meeting

However, the government has already turned down this suggestion and the site will be used exclusively as a vehicle processing centre during the conference instead. It is estimated that over 1,000 vehicles will be traveling to and from the conference venue on a daily basis. All vehicles and their drivers and passengers will have to go through screening at the Tamar Site for security verification before they are allowed to enter the conference venue. 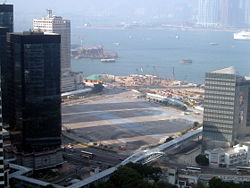 At least two hectares of the 4.2-hectare site is reserved as for recreational open space in this $5.2 billion development plan. This space will be used for an open space while the rest of the site will be used for government buildings. Most offices of the government bureaux (collaboratively called the Government Secretariat) will be moved from various locations into the new complex, as well as the Legislative Council of Hong Kong
Legislative Council of Hong Kong
The Legislative Council is the unicameral legislature of Hong Kong.-History:The Legislative Council of Hong Kong was set up in 1843 as a colonial legislature under British rule...
. The council chambers will abandon the traditional British layout and favouring a seating arrangement similar to the Congress Hall of the Great Hall of the People
Great Hall of the People
The Great Hall of the People is located at the western edge of Tiananmen Square, Beijing, People's Republic of China, and is used for legislative and ceremonial activities by the People's Republic of China and the Communist Party of China. It functions as the People's Republic of China's...
in Beijing
Beijing
Beijing , also known as Peking , is the capital of the People's Republic of China and one of the most populous cities in the world, with a population of 19,612,368 as of 2010. The city is the country's political, cultural, and educational center, and home to the headquarters for most of China's...
.

In order to ensure the buildings behind the site such as the Far East Finance Centre, the Admiralty Centre, Lippo Centre
Lippo Centre, Hong Kong
The Lippo Centre is a pair of twin office towers in Hong Kong, previously known as the Bond Center . The buildings are located at 89 Queensway, in Admiralty on Hong Kong Island. They were taken over by the Lippo Group after the collapse of the Bond Corporation...
, the United Centre
United Centre
United Centre is a Ukrainian political party. It is an offspring of Our Ukraine. It will participate in the next Ukrainian parliamentary election independently. Legally United Centre is the successor of the Party of Private Property , registered with the Ministry of Justice on September 24, 1999....
, Pacific Place Offices Towers
Pacific Place
Pacific Place is a complex of office towers, hotels and a shopping centre situated at 88 Queensway, in Admiralty, Hong Kong. The latest phase, Three Pacific Place, is located at 1 Queen's Road East....
, Island Shangri-La
Island Shangri-La
Island Shangri-La, Hong Kong is the flagship hotel of Shangri-La Hotels and Resorts, the largest Hong Kong-based hotel chain. Opened on 1 March 1991, the hotel is managed by Shangri-La International Hotel Management Limited....
and the Conrad Hotel continue to have views of the harbour, the height of the government buildings will only be allowed to be 130-180mPD.

The contract for the project is signed on 28 January and work started in mid-February 2008 and finished in 2011. The project engaged 3,000 workers.

A flag-raising ceremony was held on Monday 1 August, 2011, morning to mark the event with staff from the Commerce, Industry and Tourism Branch of the Commerce and Economic Development Bureau having the honor of being first in at Tamar.