Encyclopedia
The Red Pierrot is a small but striking butterfly found in South Asia
South Asia
South Asia, also known as Southern Asia, is the southern region of the Asian continent, which comprises the sub-Himalayan countries and, for some authorities , also includes the adjoining countries to the west and the east...
and South-East Asia belonging to the Lycaenids or Blues
Lycaenidae
The Lycaenidae are the second-largest family of butterflies, with about 6000 species worldwide, whose members are also called gossamer-winged butterflies...
family. Red Pierrots, flying weakly around and perching on the Kalanchoe plant, are usually noticed by excited children in gardens due to their beautiful striking patterns and colours. 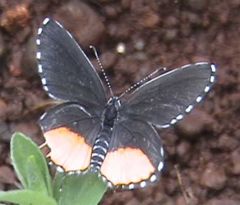 The butterfly with a wing span of 3 to 3.5 cm. The upper side of its wings are black except for a large portion of the lower edge of the hind wing which is orange.

Locally abundant. Widely distributed in Peninsular India, and has been recorded from many localities in Maharashtra
Maharashtra
Maharashtra is a state located in India. It is the second most populous after Uttar Pradesh and third largest state by area in India...
, Karnataka
Karnataka
Karnataka , the land of the Kannadigas, is a state in South West India. It was created on 1 November 1956, with the passing of the States Reorganisation Act and this day is annually celebrated as Karnataka Rajyotsava...
, Punjab
Punjab region
The Punjab , also spelled Panjab |water]]s"), is a geographical region straddling the border between Pakistan and India which includes Punjab province in Pakistan and the states of the Punjab, Haryana, Himachal Pradesh, Chandigarh and some northern parts of the National Capital Territory of Delhi...
, and Orissa
Orissa
Orissa , officially Odisha since Nov 2011, is a state of India, located on the east coast of India, by the Bay of Bengal. It is the modern name of the ancient nation of Kalinga, which was invaded by the Maurya Emperor Ashoka in 261 BC. The modern state of Orissa was established on 1 April...
. Also found in the hilly regions of NE India and northern Myanmar
Myanmar
Burma , officially the Republic of the Union of Myanmar , is a country in Southeast Asia. Burma is bordered by China on the northeast, Laos on the east, Thailand on the southeast, Bangladesh on the west, India on the northwest, the Bay of Bengal to the southwest, and the Andaman Sea on the south....
. Studies suggest that they may be on the way to colonizing the foothills of the Himalayas
Himalayas
The Himalaya Range or Himalaya Mountains Sanskrit: Devanagari: हिमालय, literally "abode of snow"), usually called the Himalayas or Himalaya for short, is a mountain range in Asia, separating the Indian subcontinent from the Tibetan Plateau...
due to changes in the habitat.

Found in semi-arid plains, degraded patches of evergreen patches, and semi-evergreen forest, gardens, hill stations and forests , in fact wherever its foodplant, Kalanchoe
Kalanchoe
Kalanchoe , also written Kalanchöe or Kalanchoë, is a genus of about 125 species of tropical, succulent flowering plants in the Family Crassulaceae, mainly native to the Old World but with a few species now growing wild in the New World following introduction of the species.Most are shrubs or...
, is abundant. It is found from the plains to 8000 feet.

The Red Pierrot is a weak flier, and flutters about close to the ground. It flies in short bursts and settles often but not for very long. It basks with its wings half open, but prefers shade to sun and jungle or undergrowth to open areas. It keeps on the wing almost till dark when it settles on the undersides of leafs and twigs often in company. It is sluggish early in the morning and late in the evening.
It visits flowers of herbs especially of the amaranthaceae
Amaranthaceae
The flowering plant family Amaranthaceae, the Amaranth family, contains about 176 genera and 2,400 species.- Description :Most of these species are herbs or subshrubs; very few are trees or climbers. Some species are succulent....
and acanthaceae
Acanthaceae
The family Acanthaceae is a taxon of dicotyledonous flowering plants containing almost 250 genera and about 2500 species....
family for nectar. It visits both ornamental and wild flowers and varieties of Alternanthera
Alternanthera
Alternanthera is a genus of approximately 80 herbaceous plant species in Amaranthaceae, the amaranth family. It is a widespread genus with a cosmopolitan distribution....
are among its favourite.

It always sits with its wings closed to display the bright markings of its undersides. It fearlessness, weak flight and distinctive markings all indicate that it is a protected butterfly, which is peculiar considering that its hostplants are not known to contain any sequestrable toxins.

There is a mention in literature of the species being found at lights at night, however such phenomena are usually restricted to species that are crepuscular and this occurrence may be incidental.

It is not a common butterfly, but near its food plant, Kalanchoe
Kalanchoe
Kalanchoe , also written Kalanchöe or Kalanchoë, is a genus of about 125 species of tropical, succulent flowering plants in the Family Crassulaceae, mainly native to the Old World but with a few species now growing wild in the New World following introduction of the species.Most are shrubs or...
, it is found in abundance and is gregarious in all its stages. 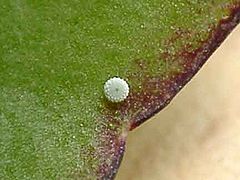 The female lays egg
Egg (biology)
An egg is an organic vessel in which an embryo first begins to develop. In most birds, reptiles, insects, molluscs, fish, and monotremes, an egg is the zygote, resulting from fertilization of the ovum, which is expelled from the body and permitted to develop outside the body until the developing...
s on the underside of a leaf. Young and old leaves are selected without discrimination as the leaves of Kalanchoe are thick and succulent during all stages. 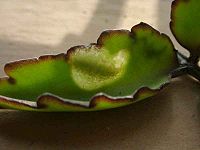 The caterpillar is pale yellow to a dirty white, and flattened with large, jet black spiracle
Spiracle
Spiracles are openings on the surface of some animals that usually lead to respiratory systems.-Vertebrates:The spiracle is a small hole behind each eye that opens to the mouth in some fishes. In the primitive jawless fish the first gill opening immediately behind the mouth is essentially similar...
s. The entire body is covered with tiny white setae or bristle-like hair.

This caterpillar is a leaf miner by habit and this serves as its defense
Self-defense
Self-defense, self-defence or private defense is a countermeasure that involves defending oneself, one's property or the well-being of another from physical harm. The use of the right of self-defense as a legal justification for the use of force in times of danger is available in many...
. As soon as it hatches it bores into the leaf and will spend the rest of its life between the epidermal
Epidermis (botany)
The epidermis is a single-layered group of cells that covers plants' leaves, flowers, roots and stems. It forms a boundary between the plant and the external environment. The epidermis serves several functions, it protects against water loss, regulates gas exchange, secretes metabolic compounds,...
layers of the leaf. Occasionally it will change leaves. 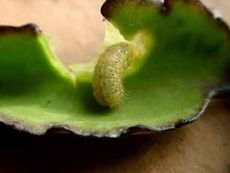 The caterpillar tunnels through the entire leaf in a neat winding manner so as to make sure to consume the entire leaf. It leaves a black trail within that is filled with droppings. The caterpillar can only be seen when it is changing leaves or when it comes to the surface to pupate
Pupa
A pupa is the life stage of some insects undergoing transformation. The pupal stage is found only in holometabolous insects, those that undergo a complete metamorphosis, going through four life stages; embryo, larva, pupa and imago...
. 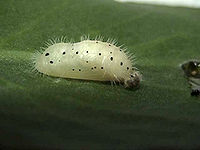 At the time of pupation the caterpillar comes out of the leaf and weaves a silk pad and a tight body band and then moults
Ecdysis
Ecdysis is the moulting of the cuticula in many invertebrates. This process of moulting is the defining feature of the clade Ecdysozoa, comprising the arthropods, nematodes, velvet worms, horsehair worms, rotifers, tardigrades and Cephalorhyncha...
to form the pupa. The pupa can be either on the under or upper surface of the leaf. It is yellow and covered with long light hairs. The pupa is also marked with numerous black spots all over the body.

The larval host plants are Kalanchoe laciniata and K. pinnata
Kalanchoe pinnata
Kalanchoe pinnata is a succulent plant native to Madagascar...
of the family Crassulaceae
Crassulaceae
Crassulaceae, or the orpine family, are a family of dicotyledons. They store water in their succulent leaves. They are found worldwide, but mostly occur in the Northern Hemisphere and southern Africa, typically in dry and/or cold areas where water may be scarce...
(Stonecrop family); the latter host being a common garden plant. Adult butterflies have sometimes been seen to visit lichens. Studies suggest that they collect phenolic substances by scraping lichens.