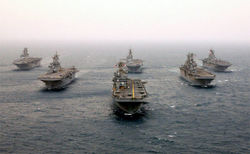 A tactical formation is the arrangement or deployment of moving military forces such as infantry
Infantry tactics
Infantry tactics are the combination of military concepts and methods used by infantry to achieve tactical objectives during combat. The role of the infantry on the battlefield is typically to close with the enemy and kill or capture him and infantry tactics are the means by which this is achieved...
, cavalry
Cavalry tactics
For much of history , humans have used some form of cavalry for war. Cavalry tactics have evolved over time...
, AFVs
Armoured fighting vehicle
An armoured fighting vehicle is a combat vehicle, protected by strong armour and armed with weapons. AFVs can be wheeled or tracked....
, military aircraft
Military aircraft
A military aircraft is any fixed-wing or rotary-wing aircraft that is operated by a legal or insurrectionary armed service of any type. Military aircraft can be either combat or non-combat:...
, or naval
Navy
A navy is the branch of a nation's armed forces principally designated for naval and amphibious warfare; namely, lake- or ocean-borne combat operations and related functions...
vessels. Formations were found in tribal societies such as the "pua rere" of the Māori, and ancient or medieval formations which include shield wall
Shield wall
The wall, is a military tactic that was common in many cultures in the Pre-Early Modern warfare age...
s (skjaldborg in Old Norse
Old Norse
Old Norse is a North Germanic language that was spoken by inhabitants of Scandinavia and inhabitants of their overseas settlements during the Viking Age, until about 1300....
), phalanxes
Phalanx formation
The phalanx is a rectangular mass military formation, usually composed entirely of heavy infantry armed with spears, pikes, sarissas, or similar weapons...
(lines of battle in close order
Close order formation
A close order formation is a military tactical formation wherein soldiers are close together and regularly arranged for the tactical concentration of force. At about the time of the U.S. Civil War , such combat formations of soldiers became unnecessary, when improved small arms and artillery made...
), Testudo formation
Testudo formation
In Ancient Roman warfare, the testudo or tortoise formation was a formation used commonly by the Roman Legions during battles, particularly sieges. Testudo is the Latin word for "tortoise"...
and skirmishers
Light infantry
Traditionally light infantry were soldiers whose job was to provide a skirmishing screen ahead of the main body of infantry, harassing and delaying the enemy advance. Light infantry was distinct from medium, heavy or line infantry. Heavy infantry were dedicated primarily to fighting in tight...
.
Tactical formations include:

A vanguard
Avant-garde
Avant-garde means "advance guard" or "vanguard". The adjective form is used in English to refer to people or works that are experimental or innovative, particularly with respect to art, culture, and politics....
, also known as Avant-garde in French, is the forward element of a column formation, and the rear-guard is the rear-most element of the column formation.
In naval use only "van" and "rear" are applied to a formation of ships sailing in column.

Examples of military aircraft tactical formations are the vee formation
Vee formation
A V formation is the symmetric V-shaped flight formation of flights of geese, ducks, and other migratory birds. V formations are also used on military flight missions.-Aerodynamics:...
, echelon
Echelon formation
An echelon formation is a military formation in which members are arranged diagonally. Each member is stationed behind and to the right , or behind and to the left , of the member ahead...
, the combat box
Combat box
The Combat box was a tactical formation used by heavy bombers of the U.S. Army Air Forces during World War II. The combat box was also referred to as a "staggered formation"...
, and the finger-four
Finger-four
The "Finger-four" formation , is a flight formation used by fighter aircraft. It consists of four aircraft, and four of these formations can be combined into a squadron formation.- Description :...
(also known as the "fluid four.")