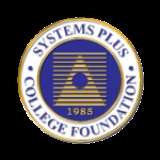 Encyclopedia
Systems Plus College Foundation (SPCF) is a Private, Non-Sectarian
Private college
Private college may refer to:*Private school*Private university...
school in Angeles City
Angeles City
The City of Angeles , located within the province of Pampanga in the Philippines, is locally classified as a first-class, highly-urbanized city. Its name is derived from El Pueblo de los Ángeles in honor of its patron saints, Los Santos Ángeles de los Custodios , and the name of its founder, Don...
, Pampanga
Pampanga
Pampanga is a province of the Philippines located in the Central Luzon region. Its capital is the City of San Fernando, Pampanga. Pampanga is bordered by the provinces of Bataan and Zambales to the west, Tarlac and Nueva Ecija to the north, and Bulacan to the southeast...
, Philippines
Philippines
The Philippines , officially known as the Republic of the Philippines , is a country in Southeast Asia in the western Pacific Ocean. To its north across the Luzon Strait lies Taiwan. West across the South China Sea sits Vietnam...
. 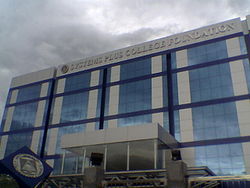 On June 27, 1985 at Santa Isabel Building in Balibago, Angeles City, five incorporators opened Systems Plus, Inc. (SPI). The organization's primary purpose was to conduct seminars for those who were planning to enter the electronic data processing as programmers, encoders and systems analyst.

On July 7, 1985, it started tutorial programs for students and professionals. The same date also served as the school's foundation day.

The growth of the school was outstanding. The year 1989 marked the opening of two campuses in Cubao, Quezon City and in Miranda, Angeles City. 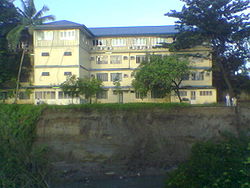 In school year 1990-1991, the enrollment figure went up to 1,215 but was greatly reduced to almost 50% in the next school year because of the eruption of Mount Pinatubo
Mount Pinatubo
Mount Pinatubo is an active stratovolcano located on the island of Luzon, near the tripoint of the Philippine provinces of Zambales, Tarlac, and Pampanga. It is located in the Tri-Cabusilan Mountain range separating the west coast of Luzon from the central plains, and is west of the dormant and...
on June 16, 1991. In the same month, the United States Air Force departed from Clark Airbase. These two events negatively affected the economic situation in Angeles City.

By the year 1995, the economic and social situations in Angeles City had improved. The enrollment at SPCC slowly increased. The Elementary and the High School Buildings were built.

A few years later, another campus in the City of San Fernando, Pampanga was opened to accommodate the fast growing student population.

In June 2004, to align with the expected growth and development, the name of the school was changed from Systems Plus Computer College to Systems Plus College Foundation (SPCF), Inc. A new school logo was adopted.

The Commission on Higher Education Regional Office has awarded the Center of Development in Information Technology designation to the school. It has been continuously producing graduates who are service-oriented, responsive to the needs of the industries, innovative and active participants in the shaping of our country's future. 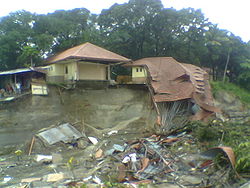 On June 19, 2009, water currents in a creek become more powerful than usual and that grounds nearby become eroded. Because of this, two of SPCF's class rooms, which were nearby, plunge into the creek. Fortunately, there were no injuries as both class rooms were vacant at the time. Other structures that were near the creek were also damaged. The cost was worth eighty million pesos
Philippine peso
The peso is the currency of the Philippines. It is subdivided into 100 centavos . Before 1967, the language used on the banknotes and coins was English and so "peso" was the name used...
.
The source of this article is wikipedia, the free encyclopedia.  The text of this article is licensed under the GFDL.