Encyclopedia
Jean-Sylvain Van de Weyer (19 January 1802–23 May 1874) was a Belgian
Belgium
Belgium , officially the Kingdom of Belgium, is a federal state in Western Europe. It is a founding member of the European Union and hosts the EU's headquarters, and those of several other major international organisations such as NATO.Belgium is also a member of, or affiliated to, many...
politician, and then the Belgian Minister at the Court of St. James's
Court of St. James's
The Court of St James's is the royal court of the United Kingdom. It previously had the same function in the Kingdom of England and in the Kingdom of Great Britain .-Overview:...
, effectively the ambassador to the United Kingdom. 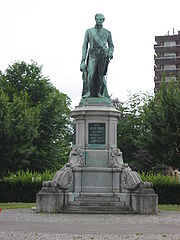 On the outbreak of the Belgian Revolution
Belgian Revolution
The Belgian Revolution was the conflict which led to the secession of the Southern provinces from the United Kingdom of the Netherlands and established an independent Kingdom of Belgium....
in 1830, Van de Weyer was in Leuven, but hurried to Brussels where he became a member of the central committee of the Provisional Government of Belgium
Provisional Government of Belgium
The Provisional Government was formed as a revolutionary committee of notables during the Belgian Revolution on September 24, 1830 at the Brussels City Hall under the name of Administrative Commission....
. His command of the English language
English language
English is a West Germanic language that arose in the Anglo-Saxon kingdoms of England and spread into what was to become south-east Scotland under the influence of the Anglian medieval kingdom of Northumbria...
resulted in him serving as a diplomatic representative of the revolutionaries. King Leopold I
Leopold I of Belgium
Leopold I was from 21 July 1831 the first King of the Belgians, following Belgium's independence from the Netherlands. He was the founder of the Belgian line of the House of Saxe-Coburg-Gotha...
appointed Van de Weyer his "special representative" in London
London
London is the capital city of :England and the :United Kingdom, the largest metropolitan area in the United Kingdom, and the largest urban zone in the European Union by most measures. Located on the River Thames, London has been a major settlement for two millennia, its history going back to its...
.

He married Elizabeth, only daughter of Joshua Bates
Joshua Bates (financier)
Joshua Bates was an international financier who divided his life between the United States and the United Kingdom.Bates was born in Commercial St., Weymouth, Massachusetts. Early in his career he worked for William Gray, owner of Gray's Wharf in Charlestown. A merchant and a banker, in 1828 Bates...
of Barings Bank
Barings Bank
Barings Bank was the oldest merchant bank in London until its collapse in 1995 after one of the bank's employees, Nick Leeson, lost £827 million due to speculative investing, primarily in futures contracts, at the bank's Singapore office.-History:-1762–1890:Barings Bank was founded in 1762 as the...
, and formerly of Boston. They had two sons and five daughters, who were brought up in Marylebone
Marylebone
Marylebone is an affluent inner-city area of central London, located within the City of Westminster. It is sometimes written as St. Marylebone or Mary-le-bone....
and on their country estate at New Lodge in the parish of Winkfield
Winkfield
Winkfield is a village and civil parish in the Bracknell Forest unitary authority of Berkshire, England.-Geography:According to the 2001 census, the parish had a population of 15,271...
in Berkshire
Berkshire
Berkshire is a historic county in the South of England. It is also often referred to as the Royal County of Berkshire because of the presence of the royal residence of Windsor Castle in the county; this usage, which dates to the 19th century at least, was recognised by the Queen in 1957, and...
. Their youngest daughter, Eleanor, was the mother of Sylvia Brett
Sylvia Brett
Sylvia Leonora, Lady Brooke, Ranee of Sarawak, born The Hon. Sylvia Leonora Brett, , was the consort to Vyner of Sarawak, last of the White Rajahs.-Early life:...
, last Ranee of Sarawak.
Eldest Son V.W.B Van de Weyer , educated at Eton, Captain of lower boats .Rowed in the winning Eton crew against Radley in Henley .June 26 1858. Prize medals presented by his father.

He was Vice-President of the London Library
London Library
The London Library is the world's largest independent lending library, and the UK's leading literary institution. It is located in the City of Westminster, London, England, United Kingdom....
from 1848 till his death in 1874.