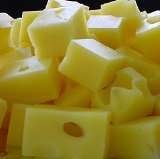 Encyclopedia
Swiss cheese is a generic name in North America for several related varieties of cheese
Cheese
Cheese is a generic term for a diverse group of milk-based food products. Cheese is produced throughout the world in wide-ranging flavors, textures, and forms....
which resemble the Swiss Emmental
Emmental (cheese)
Emmental or Emmentaler is a cheese from Switzerland. It is sometimes known as Swiss cheese in North America, Australia and New Zealand, although Swiss cheese does not always imply Emmentaler....
. Some types of Swiss cheese have a distinctive appearance, as the blocks of the cheese are riddled with holes known as "eyes
Eyes (cheese)
Eyes are the round holes that are a characteristic feature of Swiss-type cheese and some Dutch-type cheeses. They are bubbles of carbon dioxide gas that is produced by bacteria in the cheese....
". Swiss cheese has a piquant
Piquance
Piquance is a sensation associated with the sense of taste. In various Asian countries it has traditionally been considered a basic taste.-Etymology:...
, but not very sharp, taste. Swiss cheese without eyes is known as "blind".

Three types of bacteria are used in the production of Emmental cheese: Streptococcus salivarius subspecies thermophilus, Lactobacillus
Lactobacillus
Lactobacillus is a genus of Gram-positive facultative anaerobic or microaerophilic rod-shaped bacteria. They are a major part of the lactic acid bacteria group, named as such because most of its members convert lactose and other sugars to lactic acid. They are common and usually benign...
(Lactobacillus helveticus
Lactobacillus helveticus
Lactobacillus helveticus is a lactic-acid producing rod shaped bacterium of the genus Lactobacillus. It is most commonly used in the production of American Swiss cheese and Emmental cheese but is also sometimes used in making other styles of cheese, such as Cheddar, Parmesan, romano, provolone,...
or Lactobacillus delbrueckii subspecies bulgaricus), and Propionibacterium
Propionibacterium
Propionibacterium is a genus of bacteria named for their unique metabolism: They are able to synthesize propionic acid by using unusual transcarboxylase enzymes....
(Propionibacterium freudenreichii subspecies shermani). In a late stage of cheese production, the propionibacteria consume the lactic acid
Lactic acid
Lactic acid, also known as milk acid, is a chemical compound that plays a role in various biochemical processes and was first isolated in 1780 by the Swedish chemist Carl Wilhelm Scheele. Lactic acid is a carboxylic acid with the chemical formula C3H6O3...
excreted by the other bacteria and release acetate
Acetate
An acetate is a derivative of acetic acid. This term includes salts and esters, as well as the anion found in solution. Most of the approximately 5 billion kilograms of acetic acid produced annually in industry are used in the production of acetates, which usually take the form of polymers. In...
, propionic acid
Propionic acid
Propanoic acid is a naturally occurring carboxylic acid with chemical formula CH3CH2COOH. It is a clear liquid with a pungent odor...
, and carbon dioxide
Carbon dioxide
Carbon dioxide is a naturally occurring chemical compound composed of two oxygen atoms covalently bonded to a single carbon atom...
gas. The carbon dioxide slowly forms the bubbles that develop the "eyes". The acetate and propionic acid give Swiss its nutty and sweet flavor.

In general, the larger the eyes in a Swiss cheese, the more pronounced its flavor because a longer fermentation
Fermentation (food)
Fermentation in food processing typically is the conversion of carbohydrates to alcohols and carbon dioxide or organic acids using yeasts, bacteria, or a combination thereof, under anaerobic conditions. Fermentation in simple terms is the chemical conversion of sugars into ethanol...
period gives the bacteria more time to act. This poses a problem, however, because cheese with large eyes does not slice well and comes apart in mechanical slicers. As a result, industry regulators have limited the eye size by which Swiss cheese receives the Grade A stamp.