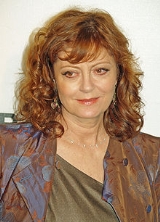 Overview
Susan Sarandon is an American actress. She has worked in films and television since 1969, and won an Academy Award for Best Actress
Academy Award for Best Actress
Performance by an Actress in a Leading Role is one of the Academy Awards of merit presented annually by the Academy of Motion Picture Arts and Sciences to recognize an actress who has delivered an outstanding performance while working within the film industry...
for her performance in the 1995 film Dead Man Walking
Dead Man Walking (film)
Dead Man Walking is a 1995 American drama film directed by Tim Robbins, who adapted the screenplay from the non-fiction book of the same name...
. She had also been nominated for the award for four films before that and has received other recognition for her work. She is also noted for her social and political activism
Activism
Activism consists of intentional efforts to bring about social, political, economic, or environmental change. Activism can take a wide range of forms from writing letters to newspapers or politicians, political campaigning, economic activism such as boycotts or preferentially patronizing...
for a variety of liberal causes.
Sarandon was born Susan Abigail Tomalin in New York City to a Roman Catholic family, the eldest of nine children of Leonora Marie (née
Married and maiden names
A married name is the family name adopted by a person upon marriage. When a person assumes the family name of her spouse, the new name replaces the maiden name....
Criscione) and Phillip Leslie Tomalin (September 26, 1917 – March 26, 1999), who worked as an advertising executive, television producer, and nightclub
Nightclub
A nightclub is an entertainment venue which usually operates late into the night...
singer during the big band
Big band
A big band is a type of musical ensemble associated with jazz and the Swing Era typically consisting of rhythm, brass, and woodwind instruments totaling approximately twelve to twenty-five musicians...
era.

"'The Power of One' : Interview with Susan Sarandon"
More
x