Encyclopedia
For the football player of the same name see Surdu
Romeo Surdu
Romeo Constantin Surdu is a Romanian footballer currently under contract with FC Rapid Bucureşti.-Club career:Surdu began his football career at FC Braşov, where he became a very good player...
. 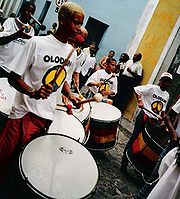 The surdo is a large bass drum
Bass drum
Bass drums are percussion instruments that can vary in size and are used in several musical genres. Three major types of bass drums can be distinguished. The type usually seen or heard in orchestral, ensemble or concert band music is the orchestral, or concert bass drum . It is the largest drum of...
used in many kinds of Brazilian music, most notably in Axé/Samba-reggae and samba
Samba
Samba is a Brazilian dance and musical genre originating in Bahia and with its roots in Brazil and Africa via the West African slave trade and African religious traditions. It is recognized around the world as a symbol of Brazil and the Brazilian Carnival...
and its variants, where it plays the lower parts from a percussion section.

Surdo sizes normally vary between 16" or even 14" and 26" or even 29" diameter. In Rio de Janeiro
Rio de Janeiro
Rio de Janeiro , commonly referred to simply as Rio, is the capital city of the State of Rio de Janeiro, the second largest city of Brazil, and the third largest metropolitan area and agglomeration in South America, boasting approximately 6.3 million people within the city proper, making it the 6th...
, surdos are generally 60cm deep. Surdos used in the northeast of Brazil
Northeast Region, Brazil
The Northeast Region of Brazil is composed of the following states: Maranhão, Piauí, Ceará, Rio Grande do Norte, Paraíba, Pernambuco, Alagoas, Sergipe and Bahia, and it represents 18.26% of the Brazilian territory....
are commonly more shallow (50cm deep). Surdos may have shells of wood, galvanized steel, or aluminum. Heads may be goatskin or plastic. A Rio bateria
Bateria
The term bateria means “drum kit” in Portuguese and Spanish. In Brazil, the word is also used for a form of Brazilian samba band, the percussion band or rhythm section of a Samba School...
will commonly use surdos that have skin heads (for rich tone) with aluminum shells (for lightness). Surdos are worn from a waist belt or shoulder strap, oriented with the heads roughly horizontal. The bottom head is not played.

A typical carnival samba bateria
Bateria
The term bateria means “drum kit” in Portuguese and Spanish. In Brazil, the word is also used for a form of Brazilian samba band, the percussion band or rhythm section of a Samba School...
in Rio de Janeiro
Rio de Janeiro
Rio de Janeiro , commonly referred to simply as Rio, is the capital city of the State of Rio de Janeiro, the second largest city of Brazil, and the third largest metropolitan area and agglomeration in South America, boasting approximately 6.3 million people within the city proper, making it the 6th...
has three surdo parts distinguished by tunings (and, by extension, sizes of drum). Together these three parts create a distinctive pattern which propels and drives the samba.

The surdos on which the primeira ("first") or marcação ("marker") part is played are the largest and deepest-pitch
Pitch (music)
Pitch is an auditory perceptual property that allows the ordering of sounds on a frequency-related scale.Pitches are compared as "higher" and "lower" in the sense associated with musical melodies,...
ed drums in the bateria. They are normally between 22" and 26" in diameter. The primeira part provides the pulse
Pulse
In medicine, one's pulse represents the tactile arterial palpation of the heartbeat by trained fingertips. The pulse may be palpated in any place that allows an artery to be compressed against a bone, such as at the neck , at the wrist , behind the knee , on the inside of the elbow , and near the...
or rhythmic reference for the entire bateria. It sounds the "2" of the basic "1, 2" rhythm of samba and may also sound pick-up notes
Anacrusis
In poetry, an anacrusis is the lead-in syllables, collectively, that precede the first full measure.In music, it is the note or sequence of notes which precedes the first downbeat in a bar. In the latter sense an anacrusis is often called a pickup, pickup note, or pickup measure, referring to the...
to start the music.

The primeira is answered by a slightly smaller and higher-pitched surdo playing a part known as segunda ("second"), resposta ("response"), or respondor ("that which responds"). It is generally played on drums 20" or 22" in diameter. It sounds the "1" of the basic "1, 2" rhythm of samba.

The third surdo part, called terceira ("third") or cutador ("cutter" in English), is played on the smallest and highest-pitched surdos, generally between 14" and 18" in diameter. The terceira part consists of more complex patterns that provide fill
Fill
Fill may refer to:*Fill dirt, soil added to an area.*Fill , a short segment of instrumental music.*In textiles, the filling yarn is the same as weft, the yarn which is shuttled back and forth across the warp to create a woven fabric....
s and syncopation
Syncopation
In music, syncopation includes a variety of rhythms which are in some way unexpected in that they deviate from the strict succession of regularly spaced strong and weak but also powerful beats in a meter . These include a stress on a normally unstressed beat or a rest where one would normally be...
s, producing an effect of "cutting" across the basic pulse created by other two surdo parts. Terceira patterns are important drivers of music's "swing" — the feel of the bateria. Terceira players are the only surdo players with room for limited improvisation.

Surdos are used by samba-reggae and axé music
Axé music
Axé is a popular music genre originating in Salvador, Bahia, Brazil approximately in 1986, fusing different Afro-Caribbean genres, such as Marcha, Reggae, and Calypso. It also includes influences of Afro-Brazilian music such as Frevo, Forró and Carixada. The most important creator of this music...
groups of northeastern Brazil. Samba-reggae usually has two (or even 3) surdo tunings, the lowest tuning playing the pulse on 1 and the higher tuning playing the 2 (The reverse of Rio-style Samba). Middle Surdos, (tuned either as the 2 or slightly higher), playing any number of counterpatterns. The middle surdos are played with two mallets in samba-reggae to allow for more complex rhythms.

Single surdos are also used extensively in smaller samba and pagode
Pagode
Pagode is a Brazilian style of music which originated in Salvador, Bahia , and quickly went down to Rio de Janeiro region, as a subgenre of Samba. Pagode originally meant a celebration with lots of food, music, dance and party...
bands.

Other bass drums found elsewhere in Brazil include the zabumba
Zabumba
A zabumba is a type of bass drum used in Brazilian music. The player wears the drum while standing up and uses both hands while playing.The zabumba generally ranges in diameter from 16 to 22 inches, and is 5 to 8 inches tall. The shell is made of wood and may utilize either skin or plastic drum...
and alfaia
Alfaia
"Alfaia" is a Brazilian instrument from the membranophone family, in which the sound is obtained through the strike of a membrane of the instrument. It is a wooden drum of animal skins that are tensioned or loosened through ropes placed alongside the body of the instrument...
of the northeast.

For samba-enredo (Rio-style Carnival samba), surdos are played with one percussion mallet, damping the head with the other hand. In more intimate settings with smaller bands, a surdo player may make elaborate use of damped hits and the free hand. In samba-reggae it is common to play the surdo with two mallets.