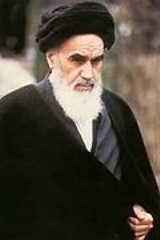 In its history, the Islamic Republic has had two Supreme Leaders: Ruhollah Khomeini
Ruhollah Khomeini
Grand Ayatollah Sayyed Ruhollah Musavi Khomeini was an Iranian religious leader and politician, and leader of the 1979 Iranian Revolution which saw the overthrow of Mohammad Reza Pahlavi, the Shah of Iran...
, who held the position from 1979 until his death in 1989, and Ali Khamenei
Ali Khamenei
Ayatollah Seyed Ali Hoseyni Khāmene’i is the Supreme Leader of Iran and the figurative head of the Muslim conservative establishment in Iran and Twelver Shi'a marja...
, who has held the position since succeeding Khomeini.

The Supreme Leader is elected by the Assembly of Experts
Assembly of Experts
The Assembly of Experts of Iran , also translated as Council of Experts, is a deliberative body of 86 Mujtahids that is charged with electing and removing the Supreme Leader of Iran and supervising his activities.Members of the assembly are elected from a government-screened list of candidates by...
, which is also in charge of overseeing the armed forces (Army, Revolutionary Guards, Police), and control of state broadcast and others (see below). The head of the Judicial branch (in Persian: قوه قضائیه) is also directly appointed by him.

The President of Iran
President of Iran
The President of Iran is the highest popularly elected official in, and the head of government of the Islamic Republic of Iran; although subordinate to the Supreme Leader of Iran, who functions as the country's head of state...
, who is elected by universal suffrage, is the Executive President (Head of government
Head of government
Head of government is the chief officer of the executive branch of a government, often presiding over a cabinet. In a parliamentary system, the head of government is often styled prime minister, chief minister, premier, etc...
). In 1989, the Prime Minister of Iran
Prime Minister of Iran
Prime Minister of Iran was a political post in Iran that had existed during several different periods of time starting with the Qajar era until its most recent revival from 1979 to 1989 following the Iranian Revolution.-Prime Ministers of Qajar era:In the Qajar era, prime ministers were known by...
's office was merged with the President's office to form the current post of President of Iran. However, certain executive powers, such as command of the armed forces and declaration of war and peace, remain in the hands of the Supreme Leader. Furthermore the Supreme Leader can even dismiss the president and prevent the legitimation of any law (appointed by assembly) by the institutions under his control, the Guardian Council
Guardian Council
The Guardian Council of the Constitution , also known as the Guardian Council or Council of Guardians, is an appointed and constitutionally-mandated 12-member council that wields considerable power and influence in the Islamic Republic of Iran....
and the Expediency Council.

More powerful than the President of Iran
President of Iran
The President of Iran is the highest popularly elected official in, and the head of government of the Islamic Republic of Iran; although subordinate to the Supreme Leader of Iran, who functions as the country's head of state...
, the Leader appoints the heads of many powerful posts: the commanders of the armed forces
Military of Iran
The Armed Forces of the Islamic Republic of Iran include the IRIA and the IRGC and the Police Force .These forces total about 545,000 active personnel . All branches of armed forces fall under the command of General Headquarters of Armed Forces...
, the director of the national radio and television network
Islamic Republic of Iran Broadcasting
Islamic Republic of Iran Broadcaster, or IRIB, , formerly called the National Iranian Radio and Television until the Islamic revolution of 1979, is a giant Iranian corporation in control of radio and television which is among the largest media organizations in Asia and Pacific region, and a regular...
, the heads of the major religious foundations
Bonyad
Bonyads are charitable trusts in Iran that play a significant role in Iran's non-petroleum economy, controlling an estimated 20% of Iran's GDP. Exempt from taxes, they have been called "bloated", and "a major weakness of Iran’s economy", and criticized for reaping "huge subsidies from government",...
, the prayer leaders in city mosques, and the members of national security councils
Supreme National Security Council
Supreme National Security Council is the national security council of the Islamic Republic of Iran, the current secretary of which is Saeed Jalili. This institution was founded during the 1989 revision of the constitution...
dealing with defence and foreign affairs. He also appoints the chief judge, the chief prosecutor, special tribunals and, with the help of the chief judge, the 12 jurists of the Guardian Council
Guardian Council
The Guardian Council of the Constitution , also known as the Guardian Council or Council of Guardians, is an appointed and constitutionally-mandated 12-member council that wields considerable power and influence in the Islamic Republic of Iran....
– the powerful body that decides both what bills may become law and who may run for president or parliament
Majlis of Iran
The National Consultative Assembly of Iran , also called The Iranian Parliament or People's House, is the national legislative body of Iran...
.


Incorporation of Supreme Leader into the Iranian Constitution

The new position of Supreme Leader needed boundaries which were established through the vague understandings of Khomeini’s book Islamic Government (Hukumat-e Islami). A referendum was held in March, a month after Khomeini’s return from exile, which asked whether an Islamic Republic should be established in Iran. The people voted strongly for an Islamic Republic and many pushed for “the people’s sovereignty to be replaced by the absolute sovereignty of God, and that Khomeini’s concept of the ‘government of the legal scholar’ (Vilayat-e Faqih) be made the principle of the constitution.” (Halm,119) Following this landslide victory Khomeini, the constitution of Iran of 1906 was declared invalid and a new constitution for an Islamic state was created and ratified by referendum during the first week of December in 1979. The new constitution consisted primarily of the ideas Khomeini presented in his work Islamic Government.

It was the Constitution that afforded the Supreme Leader a multitude of powers. Article 4 of the new constitution stated that “all civil, criminal, financial, economic, administrative, cultural, military, political, and all other statutes and regulations (must) be keeping with Islamic measures;…the Islamic legal scholars of the watch council (shura yi nigahban) will keep watch over this.” It is made very clear that the new form of government defined by the constitution will involve the clergy in every level. Furthermore, Article 5 solidifies the position of Supreme Leader where it states “during the absence of the removed twelfth Imam – may God hasten his return! – government and leadership of the community in the Islamic Republic of Iran belong to the rightful God fearing… legal scholar (Faqih) who is recognized and acknowledged as the Islamic leader by the majority of the population.” Article 107 in the constitution mentions Ayatollah Khomeini by name and praises him as the most learned and talented leader for emulation (marja-i taqlid). Khomeini’s consolidated as much power as possible within the government. The clergy was also involved in the government and oversaw the affairs of many governmental branches on a daily basis. The responsibilities of the Supreme Leader are vaguely stated into the constitution thus any ‘violation’ by the Supreme Leader would be dismissed almost immediately. As the rest of the clergy governed affairs on a daily basis, the Supreme Leader is capable of mandating a new decision as per the concept of Vilayat-e Faqih. (Halm, 120-121)


Guardianship of the Jurist (Velayat-e faghih)

The constitution of Iran combines concepts of both democracy and theocracy, theocracy in the form of Khomeini's concept of vilayat-e faqih. According to Khomeini, allegiance, in absence of the twelfth Imam, had to be given to the current vilayat-e faqih. Observers of the Shiite faith select the faqih by method of emulation (taqlid) of the jurist. In this new system, the jurist now oversees all governmental affairs. The “congregation rather than the hierarchy decided how prominent the ayatollah was” thus allowing the public to possibly limit the influence of the Faqih. The complete control exercised by the Faqih was not to be limited to the Iranian Revolution. According to Seyyed Vali Nasr, Khomeini intended the Iranian Revolution to be the first step to a much larger Islamic revolution.

Khomeini appealed to the masses, during the pre-1979 period, by referring to them as the oppressed and with charisma and political ability was tremendously successful. He became a very popular role model for Shiites and also had some appeal to the much larger Sunni population. The Faqih should be able to have a stronghold on the Shiite population and guide them even at a global level. The striking power of the Faqih was compared to Lenin and Trotsky’s image of “Russia as the springboard country of what was meant to be a global communist revolution.”

From the reemergence of the old ideology of vilayat-e faqih, many clerics have criticized both Khomeini and his successor Khamenei for two reasons. Firstly, the position of Supreme Leader has been criticized for its active participation in daily political affairs. This contrasts greatly with the quietist views held by the renowned Grand Ayatollah al-Khoei of Iraq, his successor Grand Ayatollah Sistani, and by the well respected Ayatollah Haeri Yazdi – Khomeini’s teacher. Second, the powers held by the Supreme Leader and participation in all aspects of life by a scholar should have been a position solely for the Twelfth Imam. Mahmoud Ahmadinejad had to make clear after his election that the country needs to work to hasten the return of the real leader of Iran – the Twelfth Imam. (Nasr, 133) Khoei’s appreciation for a quiet life removed him from being the kind of leader Khomeini became but he still had devout followers who made pilgrimage to Najaf
Najaf
Najaf is a city in Iraq about 160 km south of Baghdad. Its estimated population in 2008 is 560,000 people. It is the capital of Najaf Governorate...
or lived in Iraq.

Khoei was not the only one to challenge the Supreme Leader. Ayatollah Rafsanjani, recognized for his liberal attitude and President of Iran in the 1990s, withdrew funding from the ulema and factions such as Lebanon’s Hezbollah to improve the economic conditions of Iran. Khamenei recognized Rafsanjani’s challenge to the ulema but also realized the desperate economic issue in Iran. (Esposito, 211) The biggest challenge to both Khomeini and Khamenei, however, was Ayatollah Montazeri. Montazeri was placed under house arrest even though he was Khomeini’s right hand man during the Iranian Revolution. In the early years of the revolution, Montazeri gained much approval to be the next Supreme Leader but was forced to resign due to the concern he raised about a number of human rights violations in Iran. (Esposito, 211) In essence, both Rafsanjani and Montazeri alluded that by having complete control over all the affairs of the country, the Supreme leader should be held accountable for all the flaws whether political, economical, or social, a feat that could only be accomplished only by the Imams.


Functions and duties of the Supreme Leader