Overview
A supercritical airfoil is an airfoil
Airfoil
An airfoil or aerofoil is the shape of a wing or blade or sail as seen in cross-section....
designed, primarily, to delay the onset of wave drag
Wave drag
In aeronautics, wave drag is a component of the drag on aircraft, blade tips and projectiles moving at transonic and supersonic speeds, due to the presence of shock waves. Wave drag is independent of viscous effects.- Overview :...
in the transonic
Transonic
Transonic speed is an aeronautics term referring to the condition of flight in which a range of velocities of airflow exist surrounding and flowing past an air vehicle or an airfoil that are concurrently below, at, and above the speed of sound in the range of Mach 0.8 to 1.2, i.e. 600–900 mph...
speed range. Supercritical airfoils are characterized by their flattened upper surface, highly cambered
Camber (aerodynamics)
Camber, in aeronautics and aeronautical engineering, is the asymmetry between the top and the bottom surfaces of an aerofoil. An aerofoil that is not cambered is called a symmetric aerofoil...
(curved) aft section, and greater leading edge
Leading edge
The leading edge is the part of the wing that first contacts the air; alternatively it is the foremost edge of an airfoil section. The first is an aerodynamic definition, the second a structural one....
radius compared with traditional airfoil shapes. The supercritical airfoils were designed in the 1960s, by then NASA
NASA
The National Aeronautics and Space Administration is the agency of the United States government that is responsible for the nation's civilian space program and for aeronautics and aerospace research...
engineer Richard Whitcomb
Richard Whitcomb
Richard T. Whitcomb , was an American aeronautical engineer noted for his significant contributions to the science of aerodynamics....
, and were first tested on a modified North American T-2C Buckeye. 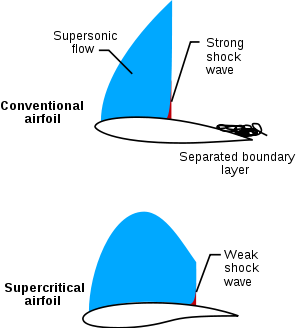 Research in 1940 by Deutsche Versuchsanstalt für Luftfahrt
German Aerospace Center
The German Aerospace Center is the national centre for aerospace, energy and transportation research of the Federal Republic of Germany. It has multiple locations throughout Germany. Its headquarters are located in Cologne. It is engaged in a wide range of research and development projects in...
's K. A. Kawalki led to subsonic profiles very similar to the supercritical profiles, which was the basis for the objection in 1984 against the US-patent specification for the supercritical airfoil.

At a certain point along the airfoil, a shock is generated, which increases the pressure coefficient
Pressure coefficient
The pressure coefficient is a dimensionless number which describes the relative pressures throughout a flow field in fluid dynamics. The pressure coefficient is used in aerodynamics and hydrodynamics...
to the critical value Cp-crit, where the local flow velocity will be Mach 1. The position of this shockwave is determined by the geometry of the airfoil; a supercritical foil is more efficient because the shockwave is minimized and is created as far aft as possible thus reducing drag
Drag (physics)
In fluid dynamics, drag refers to forces which act on a solid object in the direction of the relative fluid flow velocity...
. Compared to a typical airfoil section, the supercritical airfoil creates more of its lift at the aft end, due to its more even pressure distribution over the upper surface.