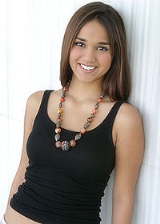 Encyclopedia
Summer Yasmine Bishil is an American
United States
The United States of America is a federal constitutional republic comprising fifty states and a federal district...
actress. She first came to prominence for her role as Jasira in the 2007 film Towelhead
Towelhead (film)
Towelhead is a 2007 black comedy film written and directed by Alan Ball and based on Alicia Erian's novel of the same name. The film made its world premiere at the Toronto Film Festival on September 8, 2007 under the name Nothing is Private...
. She has been chosen to portray Azula in the sequel to M. Night Shyamalan
M. Night Shyamalan
Manoj Nelliyattu Shyamalan,known professionally as M. Night Shyamalan, is an Indian-born American screenwriter, film director, and producer known for making movies with contemporary supernatural plots that climax with a twist ending. He is also known for filming his movies in and around...
's film The Last Airbender
The Last Airbender
The Last Airbender is a 2010 American fantasy adventure film written and directed by M. Night Shyamalan. It is a live-action film adaptation of the first season to the Nickelodeon animated series Avatar: The Last Airbender....
.

Bishil was born in Pasadena, California
Pasadena, California
Pasadena is a city in Los Angeles County, California, United States. Although famous for hosting the annual Rose Bowl football game and Tournament of Roses Parade, Pasadena is the home to many scientific and cultural institutions, including the California Institute of Technology , the Jet...
and is the youngest of three children. Her mother is a European American, and her father is a Saudi Arabian national of Indian heritage. In 1991, when Bishil was three years old, the family moved to Saudi Arabia, later relocating to Bahrain
Bahrain
' , officially the Kingdom of Bahrain , is a small island state near the western shores of the Persian Gulf. It is ruled by the Al Khalifa royal family. The population in 2010 stood at 1,214,705, including 235,108 non-nationals. Formerly an emirate, Bahrain was declared a kingdom in 2002.Bahrain is...
, where she and her older brother attended Bahrain School
Bahrain School
Bahrain School is a United States Department of Defense school located in Juffair, Manama, Bahrain.- Overview :The school is operated by the Bahrain International School Association with the United States Department of Defense Education Activity and takes students from Kindergarten to Twelfth grade...
.

The family returned to California in 2002, where she completed an independent study program for high school
High school
High school is a term used in parts of the English speaking world to describe institutions which provide all or part of secondary education. The term is often incorporated into the name of such institutions....
. She stated that the return was not easy: "I initially had some tough times trying to assimilate. It really makes you think about who you are and where you’re at.”

Bishil started acting lessons at age 14. Within a year, she was signed to a contract with a manager and agency. Bishil's first role was on the short-lived Nickelodeon
Nickelodeon (TV channel)
Nickelodeon, often simply called Nick and originally named Pinwheel, is an American children's channel owned by MTV Networks, a subsidiary of Viacom International. The channel is primarily aimed at children ages 7–17, with the exception of their weekday morning program block aimed at preschoolers...
television show Just for Kicks, followed by appearances in several other children's shows before her break-through performance as the lead in Alan Ball
Alan Ball (screenwriter)
Alan E. Ball is an American writer, director, actor and producer for film, theatre and television.-Early life:Ball was born in Atlanta, Georgia, to Frank and Mary Ball, an aircraft inspector and a homemaker...
's film, Towelhead
Towelhead (film)
Towelhead is a 2007 black comedy film written and directed by Alan Ball and based on Alicia Erian's novel of the same name. The film made its world premiere at the Toronto Film Festival on September 8, 2007 under the name Nothing is Private...
in 2006, an adaptation of the novel of the same name.

Slate
Slate (magazine)
Slate is a US-based English language online current affairs and culture magazine created in 1996 by former New Republic editor Michael Kinsley, initially under the ownership of Microsoft as part of MSN. On 21 December 2004 it was purchased by the Washington Post Company...
critic Dana Stevens
Dana Stevens (critic)
Dana Shawn Stevens is a movie critic at Slate magazine. She is also a regular on the magazine's weekly cultural podcast the Culture Gabfest.-Life and career:Stevens grew up in Scarsdale, New York...
said that "Her performance is the truest thing in a movie that, for all its good intentions, feels thoroughly phony and mildly embarrassing, like an extended PSA
Public service announcement
A public service announcement or public service ad is a type of advertisement featured on television, radio, print or other media...
about inappropriate touching." Bob Strauss, who writes for several Los Angeles
Los Ángeles
Los Ángeles is the capital of the province of Biobío, in the commune of the same name, in Region VIII , in the center-south of Chile. It is located between the Laja and Biobío rivers. The population is 123,445 inhabitants...
newspapers, states that Bishil, "...is one of the finest natural film actresses to emerge in years." Gary Goldstein of the Los Angeles Times
Los Angeles Times
The Los Angeles Times is a daily newspaper published in Los Angeles, California, since 1881. It was the second-largest metropolitan newspaper in circulation in the United States in 2008 and the fourth most widely distributed newspaper in the country....
in a September 12 review of the movie Towelhead, stated that, "...newcomer Summer Bishil turns in a gutsy, quietly riveting performance as Jasira."

In 2007, she filmed Wayne Kramer
Wayne Kramer (filmmaker)
Wayne Kramer is a South African screenwriter, film producer, storyboard artist and film director.Kramer has written and directed films such as The Cooler, Crossing Over, Blazeland and Running Scared...
's project, Crossing Over
Crossing Over (film)
Crossing Over is a 2009 American independent drama film about illegal immigrants of different nationalities struggling to achieve legal status in Los Angeles. The film deals with the border, document fraud, the asylum and green card process, work-site enforcement, naturalization, the office of...
, starring Harrison Ford
Harrison Ford
Harrison Ford is an American film actor and producer. He is famous for his performances as Han Solo in the original Star Wars trilogy and as the title character of the Indiana Jones film series. Ford is also known for his roles as Rick Deckard in Blade Runner, John Book in Witness and Jack Ryan in...
, Ray Liotta
Ray Liotta
[File:Ray Liotta is an American actor, best known for his portrayal of Henry Hill in the crime-drama Goodfellas, directed by Martin Scorsese and his role as Shoeless Joe Jackson in Field of Dreams...
and Ashley Judd
Ashley Judd
Ashley Judd is an American television and film actress, who has played lead roles in films including Ruby in Paradise, Kiss the Girls, Double Jeopardy, Where the Heart Is and High Crimes...
.